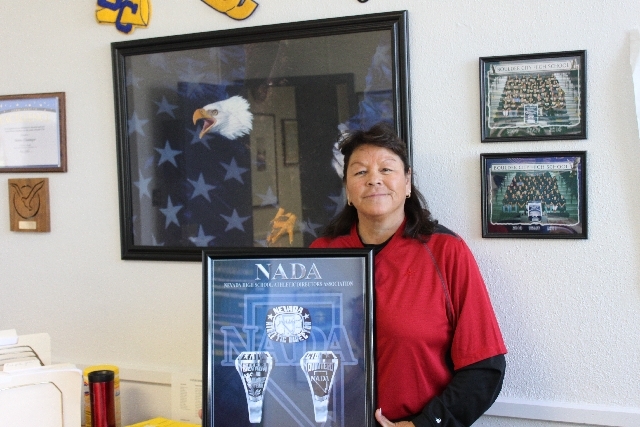 “Everyone has enjoyed the summer, but another school year is almost here,” Eagles Athletic Director Regina Quintero said. “The nine fall teams will all start practices at some point by Aug. 19.”

Football kicks off with three days of “heat acclimation” sessions before moving onto helmets-only practices Aug. 15-17, and then full pads and two-a-day workouts Aug 19. The two-a-day practices will be at 8 a.m. and 8 p.m.

“The players are eager to start the season,” football coach Alex Kazel said. “They have been working in the weight room all summer. It will be good to get outside and start running drills.”

The football team enjoyed one of its best seasons in years last season, despite joining a new league and playing some larger schools.

The Eagles had a 9-2 record overall, 4-1 in the Sunrise League, and reached the state 1-A quarterfinals where they lost to Cheyenne, 30-23, on Nov. 2. It was the Eagles first playoff berth since 2009.
Boulder City’s nine fall sports are football, girls volleyball, girls golf, as well as soccer, cross-country and tennis for both boys and girls. Boulder City will start its second season in the Division 1-A classification and compete in the Sunrise League.

The Lady Eagles volleyball team is having its annual camp 8 a.m. to 3 p.m. Monday to Wednesday with visiting coaches from All-American Volleyball.

Last season, the Lady Eagles were 28-8 overall and 12-0 in the Sunrise League before losing to Chaparral in the Southern Region semifinal.

The Lady Eagles’ golf squad will get the latest start of all the fall teams, beginning practices Aug. 19.

“As a senior, this season is the most important for me,” Jordyn Syler said. “It is the time I have to do my best not only for scholarships, but academically as well. It is a time to put it all together for the school’s golf team and to reach all of our goals.”

The boys soccer team did well last season after moving into the new league. The Eagles won their first-round playoff match against Faith Lutheran, 2-1, and posted a winning record of 9-8-1. The tough task this season is competing in the same league with state champion Tech.

The girls soccer team practiced drills for several weeks this summer against the boys’ team in voluntary intramurals.

The Lady Eagles, 8-7-1 last season, have reached the playoffs in 14 consecutive seasons and played in the state’s championship tournament in 2011 and 2010. They lost in the opening round of the Division I-A playoffs last season to Faith Lutheran.