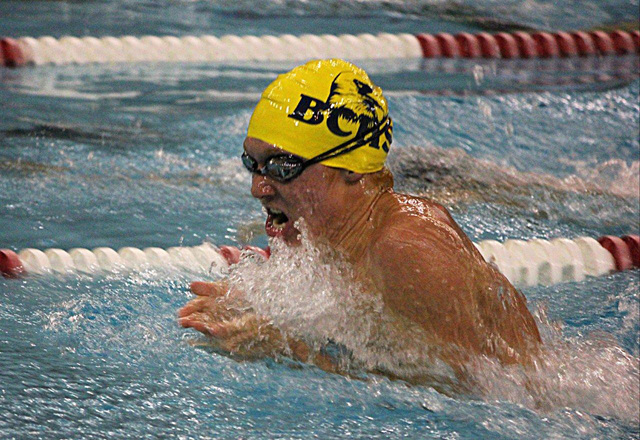 The Boulder City boys swimming team will go after a fourth consecutive state championship and eighth overall when they hit the water Saturday in the Division I-A Championships at the Buchanan Natatorium on the UNLV campus.

This past Saturday, the Eagles made it four Southern Region championships in a row when they swept the field and out-distanced second-place Faith Lutheran 547 points to 322 points at UNLV. The top four finishers in each of the 12 events advanced from the region to the state meet.

Boulder City’s Sam Sauerbrei set the record in the 200 individual medley with his effort of 1 minute, 57.55 seconds, breaking the previous record of 1:58.72 that he set last year.

“Sam did a great job setting records in his events, and all the swimmers did great especially since it was a nighttime event and we usually swim in the day,” said Boulder City coach Sara Carroll, who is hoping both her boys and girls teams can defend their state championships of a year ago.

The boys are attempting to win their fourth straight state title and eighth overall, and it would be a fifth boys title for Carroll, who has been at the school as coach for 20 years. The girls are hoping for back-to-back state swimming titles for the first time in school history. If all goes well, Carroll will have coached seven state championship swim teams at Boulder City.

Sauerbrei, Jared Smith, Evan Klouse and Joey Gebhart teamed to win the 200-yard medley relay with a time of 1:37.62.

“I just want the kids to do well at state, win their events and realize their dreams,” Carroll said. “I want the parents to enjoy the day after all the time and effort they have put in over the years.”