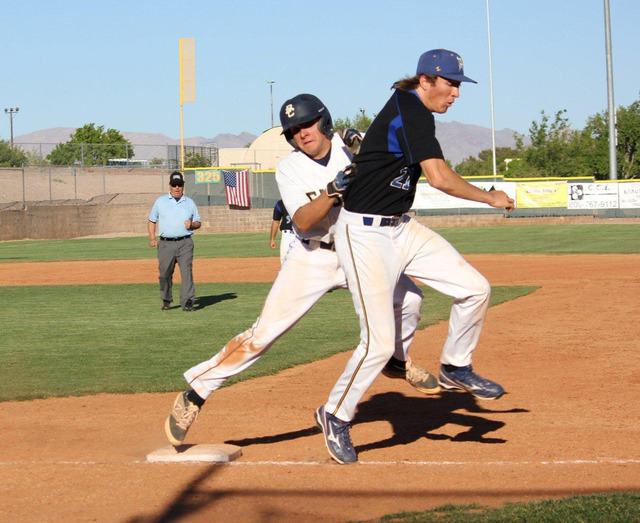 The victory improved the first-place Eagles’ overall record to 10-2-2 and Sunrise League record to 4-0. They have won seven straight games and nine of their past 11.

The Eagles had a home game Wednesday against second-place Tech (9-3 overall and 4-1 in the league. Boulder City headed into the game undefeated this season at home).

“It’s not exactly what I envisioned before the game, but it’s a league win, and against Moapa Valley which is always a big rival for us, so I’ll take it,” head coach Bobby Reese said. “That’s the most runs any of my teams has ever scored and the most we given up while winning a game. But that’s what happens when the pitchers give up eight walks and your defense makes two errors.

“Again, I am happy with the hitting and the wins, but we have areas to improve.”

Of the eight Moapa Valley walks, seven came around to score and keep the Pirates in the game.

Boulder City was led by pitcher Peyton Koopman, who threw two innings to get the win. He had five strikeouts.

Taylor Wold, batting ninth, went 3-for-3 with a double and four RBIs and teammate Austin Wishard hit a home run and had three RBIs. Austin Shepard had two RBIs.

“The hitting was great. This was our best game this season hitting the ball,” said Koopman, a sophomore. “It seems like each game we are hitting better and better. We needed the hitting against Moapa Valley to overcome all the walks and runs we allowed. But the team is coming together and we are all playing hard to win each time we take the field.”

Koopman scored on an error in the top of the ninth inning to give Boulder City the victory. Koopman led off the inning and was hit by a pitch. He moved to second base on a wild pitch, stole third base and scored the winning run on an error. Boulder City’s other scoring came in a four-run third inning.

Wishard and Knudsen each drove in two runs for the Eagles, and Koopman was 2-for-3 with two runs scored.