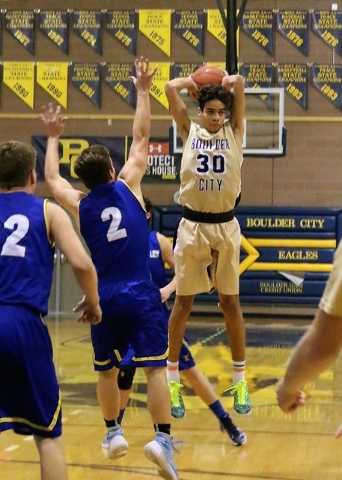 Boulder City High School senior forward Justus Green, seen during a Jan. 6 game against Moapa, should be a breakout star for the Eagles this coming season after good performances during summer tournaments. Laura Hubel/Boulder City Review

The feeling among the Boulder City High School boys basketball program is upbeat with a pair of solid performances against a pair of Division I programs.

Despite losing to Eldorado 60-47 and Valley 45-43 in the Bigfoot Hoops Basketball Las Vegas Live tournament July 13-17 at the Doolittle Community Center, the coach and team members said they feel the games helped show them the level of competition they are capable of playing against.

I thought we did a nice job out there this weekend, head coach John Balistere said. All summer long Ive thought weve competed well against some of the larger Division I programs. These games dont count for anything against our upcoming schedule. This is just about getting better each day, and I feel we do that.

After nearly pulling off an upset against Valley, one of the prominent high school programs in the Sunrise region of the Division I ranks, Balistere said he is pleased with the way the Eagles played.

Obviously you want to win, Balistere said. More importantly though, this game proved to our guys that we can play with them. Well have our hands full with them when we open up the regular season against them, but Im confident that the boys can put together another great outing.

Squandering a lead late in the game to the Vikings, the Eagles were certainly disappointed to walk away from the competition without a victory despite playing well. But, they found a potential silver lining with the outstanding performances of junior guard Carson Balistere and senior forward Justus Green.

Pouring in a game-high 19 points and five rebounds for the Eagles, Carson Balistere, who is set to become a third-year starter for the program this season, looked comfortable controlling the tempo of the offense, while Green seems poised to break out into a larger role this season with the Eagles following an outing against Valley of 11 points and 14 rebounds.

We have a bunch of returners this year who can hopefully contribute to us winning ball games, coach Balistere said. We have guys that can put the ball on the floor and make plays when we need them. Id say well certainly be more well-rounded offensively with some key guys stepping up for us.

Hopeful to come away with a victory in the Bigfoot Hoops tournament, the Eagles are competing in the Las Vegas Classic Wednesday through Sunday where theyre sure to run into another few Division I opponents.

I love summer ball for the fact that it gets these guys ready without any consequences, coach Balistere said. Were doing a lot of things right, but at the same time we have areas that need to be improved upon. Well be back at it again this weekend, hoping to get our areas of concern fixed.