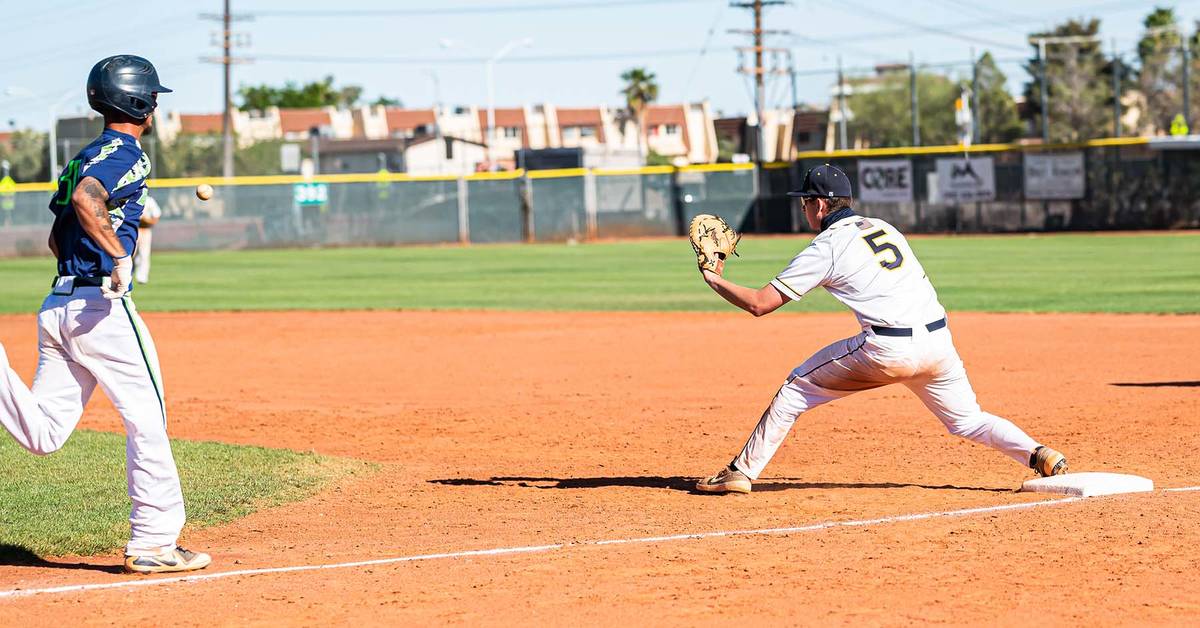 (Jamie Jane/Boulder City Review) Joey Giunta, a senior at Boulder City High School, makes the out at first base April 28 as the Eagles routed SLAM Academy 15-0.

Routing SLAM Academy 15-0 at home April 28 in four innings, senior Scott Bahde threw a no-hitter against the Bulls, striking out five in the process, while finishing 2 for 3 at the plate with a pair of runs batted in and doubles.

Erupting for nine runs in the second inning, senior Joey Giunta finished 2 for 3 with a team-high three RBIs. Senior Matt Felsenfeld finished 1 for 3 with a two-run double.

Traveling to Pahrump Valley on April 29, the Eagles showed they’re more than capable of winning tight games as well, defeating the Trojans 1-0 after winning their first team games by a combined 49-2.

“We had a lot of kids contribute in the Pahrump win,” head coach Bobby Reese said. “Troy Connell on the mound, with Bahde catching him. Deavin Lopez was on base three times, while Giunta and Isaac Gibson came up with big hits to manufacture a run.

“It was just an excellent team effort. Just shows you how deep this team is.”

Down to two outs in the top of the seventh inning in the scoreless ball game, Gibson broke things up with a line drive to left field giving the Eagles the game’s only run.

Gibson finished the game 1 for 3, and Lopez finished 2 for 3 at the plate.

Battling on the mound, Connell threw a no-hitter against the Trojans, earning two of his seven strikeouts in the bottom of the seventh inning to seal the win.

“We are certainly not short on pitching,” Reese said. “Bahde and Connell are excellent, but don’t forget we have a few other guys just waiting for their chance.”

The third no-hitter of the season so far for the Eagles, Bahde and Connell joined Giunta, who threw one against Sunrise Mountain on April 22.

Dominating teams in the run column and overpowering opponents on the mound, the Eagles look to remain perfect today, May 6, when they host Eldorado. They travel to Western on Monday, May 10, and Clark on Tuesday, May 11.