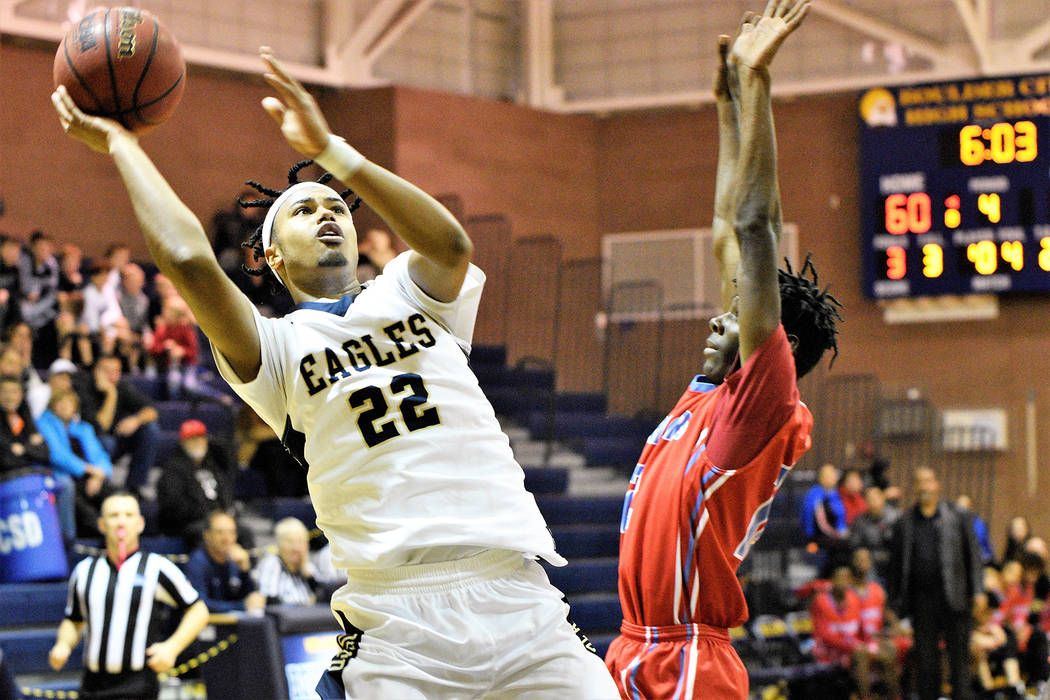 (Robert Vendettoli/Boulder City Review) Creating space, senior forward Derrick Thomas steps back for a midrange jump shot against Western in the first round of the Class 3A postseason Tuesday, Feb. 19, 2019. Boulder City won the game 88-58 and advanced to the semifinals.

Boulder City High School boys basketball team blew out visiting Western 80-58 in the opening round of the Class 3A Southern Region tournament Tuesday, Feb. 19, by playing up to their potential in the second half.

“I think the boys finally woke up in the second half and played the basketball we’re accustomed to seeing,” head coach John Balistere said. “We knew Western was going to come in here pumped up and give us their best and they certainly did. We came out flat in the first half, but we rebounded.”

Tied at 30-30 after the first half, the Eagles routed the Warriors with a strong second-half effort, keyed by a 30-15 third-quarter run.

“We definitely played a lot better in the second half,” Balistere said. “We didn’t really have to make any adjustments. We just had to get back to doing what we’re good at and I thought playing hard was one of them. I don’t think we all played hard as a group in the first half, but we picked that up. We’ll be better on Thursday; we’ll need to be.”

Giving Western fits in the paint, sophomore forward Matt Morton concluded the effort with 11 points for the Eagles.

All four players are listed at 6 foot 5 inches or taller on the Eagles’ roster, a size rarity in the 3A class that could prove to be a difference maker down the stretch.

“I feel that when our team uses our size to our advantage we can create major matchup nightmares on the boards,” Thomas said. “It’s a great luxury to have four of our starters above 6 foot 5 (inches), who can go off and lead us in scoring whenever.”

The Eagles will face Mojave in a region semifinal at 6:30 tonight, Feb. 21, at Del Sol. Bounced in the playoffs last season by the Rattlers in a 92-91 overtime thriller, the Eagles will try to gain the upper hand this time around.