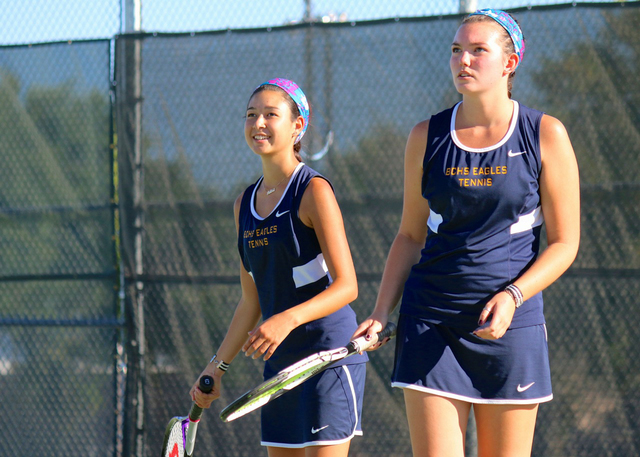 Having already clinched a state tournament berth, the Boulder City High School boys tennis program has officially rose to prominence in the 3A classification after convincing wins over Mojave 18-0 on Sept. 29 and Desert Pines 15-3 on Oct. 1 in the Sunrise region team tournament.

Known as bottom feeders in the 3A classification for years, the Eagles have now made back-to-back trips to the postseason, last season serving as the division’s fourth seed.

“What a difference a year makes,” junior Sam O’Berto said. “Last year we were building the program, knowing that we had players on our team that could really play. This year we really took the league by storm. When Clark got moved back up to 4A, I told the guys in the summer that this was our year to go to state. Everyone worked really hard and we didn’t disappoint.”

Sweeping their way through the Rattlers, the Eagles stayed strong against the Jaguars, picking up where they left off from the regular season to extend their season with a 12-0 record.

Punching their ticket to Reno for their first state tournament appearance as a team since 1977, the Eagles will play their semifinals matchup against a Northern Nevada program yet to be determined at the Reno Tennis Center on Oct. 20. The team also hopes to qualify individual competitors for the Reno trip, with several players having landed as high seeds for the individual regional competition scheduled to begin today at the Darling Tennis Center in Las Vegas.

“I’m very proud of the boys, who have played well all season,” head coach Rachelle Huxford said. “All of our players have top seeds individually. They all have tough matches coming up, but I know they’re physically and mentally ready. I can’t put it into words how proud I am. As a coach I couldn’t ask for a better team.”

Leading the way in singles competition, junior Andre Pappas and freshman Breton Erlanger earned first-round byes, representing the Sunrise League as the No. 1 and No. 2 seeds, respectively. O’Berto also qualified for the event as a No. 6 seed and is scheduled to play Ian Davidson from Southeast Career Technical Academy today.

In doubles competition, the freshman pair of Boen Huxford and Preston Jorgenson, juniors Garrett Leavitt and Clayton Pendleton and junior Tanner Montgomery and sophomore Karson Bailey have all earned first-round byes as well, representing the conference as the top three teams for the region.

“We’re all very confident in our abilities to get the job done,” Pappas said. “We’re already heading up to Reno for team finals, but all of us have goals to make it there as individuals, as well. We know we’re going to be tested here against the best players from our side of the state and we look forward to that challenge.”

The Lady Eagles also qualified all six of their starters for the individual regional, after falling short of their team goal in the semifinals of the team tournament with a 16-2 loss to The Meadows on Saturday.

“This has been such a great season for the girls,” head coach Katy Dorne said. “They have really come together and worked hard to improve throughout the season and get to regionals. We are excited for the remainder of the postseason.”

Representing the Lady Eagles in singles competition as the No. 1 and No. 3 seed, respectively, freshman Teagan Pappas and sophomore Natalie Bowman have earned first-round byes, while No. 6 seed sophomore Olivia Goodfellow will play Talia Hansen from Virgin Valley in the first round today.

Feeling confident about her chances to join her older brother Andre in Reno, Teagan Pappas is committed to playing to the best of her capabilities.

“To be successful in individual regionals you have to go in with commitment and confidence in yourself,” she said. “You have to go in telling yourself that you are going to win and that’s all that you came to do. I’m going to play my matches so that I have no regrets about the way that I played when I am finished.”

In doubles competition, the senior pairing of Kyra Yamamoto and Mckenna Frazier earned a first-round bye as the No. 3 seed in the Sunrise, while the No. 6 seeded tandem of freshman Kali Martin and sophomore Heather Patterson will play Brie Perkins and Wizlandi Olbrice from Desert Pines today, along with the No. 7 seed of freshmen Sophia Morris and Katelyn Fox, who will square off against Celestina Griuelja and Jasmine Flores from Sunrise Mountain.

“I think all our doubles teams are going to do fantastic,” Yamamoto said. “Makena and I are excited for our last regionals together. We support each other very well and we aren’t intimidated by other teams because we know we’re just as good as they are. We are very excited to play and see how things play out.”