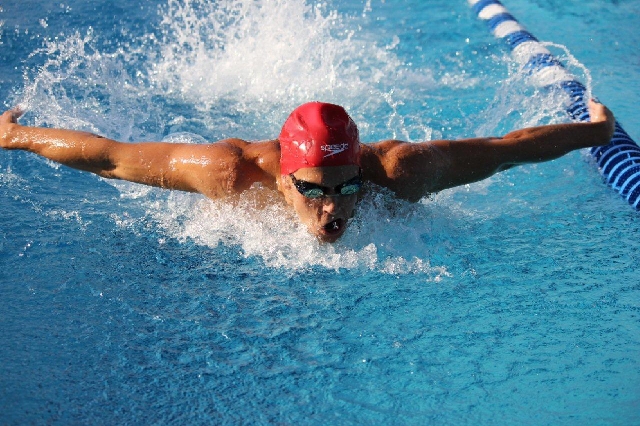 Six Boulder City swimmers from the Heatwave swim club did well in open competition July 5-7 in the Los Angeles Invitational in Irvine, Calif.

Alex Hubel, Jeremy Estes and Jared Smith each competed in seven separate events and each helped their relay teams to victory in the national-level event.

“It was a tough meet for the more experienced swimmers,” Heatwave head coach Mike Polk said. “This was the first big event for our senior-level national swimmers on the squad.”

Estes, 18, swam the first leg of the winning 200 freestyle relay (1:35.34). In that race, Smith swam the third leg for a Heatwave team that finished fifth.

Smith, who will be a senior, also finished second in the 400 meter medley relay. Estes’ team was eighth in the same relay.

Estes, who graduated and will attend University of Chicago this fall, finished third in the 200 medley relay, and saw his best individual finish in the 50 freestyle where he finished fifth.

He also competed in the finals of the 100 freestyle and 100 butterfly.

“I did fairly well in Los Angeles,” Estes said. “My goal for the meet was what it has been for the past year since I joined the team, to lower my times and make the summer junior nationals time cuts, which I did accomplish.”

Estes has already qualified for the junior nationals in three events, the 50 and 100 meter freestyle, and the 100 meter butterfly.

Rachel Grothe, who will be a junior, competed in the finals of three events; 100 and 200 butterfly, and a fifth place finish in the 200 freestyle relay with teammate Megan Purdy.

Purdy, who graduated this year, also swam in the finals of the 400 freestyle.

The Heatwave will compete Monday in the Las Vegas Swim Club’s Desert Committee Relay Meet at the Pavilion Center Pool in Las Vegas. The meet is sanctioned by USA Swimming, and Southern California Swimming.

He will compete against many of his old Heatwave club mates at the U.S. Open in July 30-Aug. 3 in Irvine, Calif.

Grothe attends Auburn University of the Southeastern Conference and is studying aerospace engineering. He holds the Auburn school record in the 500-yard freestyle, the 800-meter freestyle, and the 1,000 and 1,650-yard freestyles.

He was part of the SEC championship 800 freestyle relay team, and is a six-time all-American.