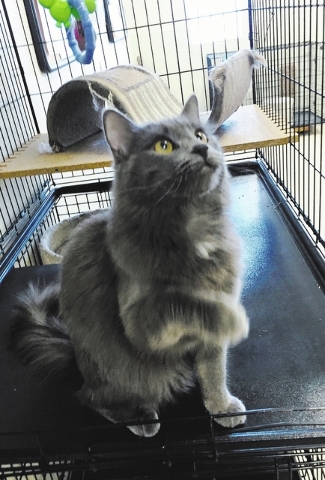 Credit union should restore Ferrence’s photo to place of honor

I recently visited the Boulder Dam Credit Union to do my regular banking. Something was not the same. I soon realized that the photograph of my friend, Bill Ferrence was no longer in the position on the support column in front of the line where you wait to go to the tellers. (It was) Gone.

I always enjoyed having Bill’s photo welcome me into Boulder Dam Credit Union. Seeing Bill’s photo was a loving remembrance of a guy I really respected and, to this day, I still miss very much. Boulder Dam Credit Union has moved on, keeping up with changing times, but Bill Ferrence will always be remembered by the Boulder City community as the man who made the credit union a great place, and contributed enormously to Boulder City in many other ways.

I did finally notice that Bill’s photo was still in the lobby, although it was now placed high on the back side of another support column, much less visible. The original placement position was now occupied by a poster-sized electronic sign showing interest rates (zero) and a Boulder City events calendar. Nice stuff, I guess, but stuff that can be easily found elsewhere.

I requested Mr. (Eric) Estes, Bill’s successor, to please return the photo of Bill Ferrence to its traditional position on the “Welcoming” column. He said many nice things to me about community info, etc., and his memories of Bill, but no restoration of our beloved friend to his “Welcome to Boulder Dam Credit Union” position.

I do not believe that replacing a photo of Bill Ferrence with an electronic billboard well honors the memory of one of Boulder City’s most beloved citizens. Mr. Estes, please put Bill back where he belongs, as I asked you to do weeks ago.

Nevada consumers have no recourse against businesses

In early 2014, my husband asked me to return items to RadioShack. I had the products and the receipt, but not the bank card he used; therefore, the return was issued onto a gift card reflecting a balance of $121.07.

Last week, while awaiting a to-go order at the Pit Stop, I stopped in and browsed to see what was on sale. I made a selection and gave them the card.

Right away, the attendant aid “Oh, those are no good anymore.”

“You mean like the news that tells me that the country is excited about a Clinton/Bush race in 2016?” I asked.

He then threw away my “gift” card.

My comment to the editor is why has no one mentioned (Gov. Brian) Sandoval’s shutting down of the consumer (affairs) protection division as part of his budget fix? As a Nevadan, what agencies exist anymore through which I might remedy this injustice?

Power of attorney necessary to retain control of life

Do you have a medical power of attorney? If you don’t, things can get really hairy for family and friends.

This happened to my neighbor: The short story is he became ill and very rapidly lost his rights. He was declared incompetent, made a ward of the county, removed from the hospital, put into a nursing home, misled about where he was and denied visits from friends. All very quickly.

This is legal in Nevada. Since he had no family living in Nevada he was quickly appointed a private professional guardian. As of today, he has no control of his life. My neighbor is well aware of this.

One good thing is that he is in the (Nevada State) Veterans Home and able to have visitors. A relative who lives out of state was able to become co-guardian a few weeks later.

The Las Vegas Review-Journal has written several great articles about this and, as a result, the county commissioners and Nevada state lawmakers are working to amend this abuse. Senate Bill 262 passed the Senate unanimously and is being considered in the Assembly. Assembly Bill 325 requires private professional guardians to be licensed. Please email or call your legislators and let them know how you feel.

I am in the same position as my neighbor with no family in Nevada. I do have a power of attorney. But someone told my neighbor’s relative that she has approximately eight hours to show up with a power of attorney in hand, otherwise she had no say so. My family would be here as soon as possible, but planes, trains and automobiles do not always run on time due to schedules and weather.

My neighbor is a staunch Republican and I am a staunch Democrat, and we have great debates. Has he lost his right to vote? We both agree on the need for change.

The article on Sempra (U.S. Gas and Power/Copper Mountain) was wonderful. It stated they had donated more than $50,000 to Southern Nevada. I believe it is actually more than that.

They are very generous with our Boulder City community. They not only provide funds but are a very hands-on company. You see the employees and their families constantly involved in the city.

My hats off to a great company and all they have done for us.

Boulder City ​will be voting on Question 1 in the election on June 2. By law, our voters must authorize any expenditures from the city’s capital improvement fund, which receives its money from solar energy leases, land sales and other similar sources. No general fund​,​​ taxpayer dollars are involved.

Question 1 simply authorizes the City Council to spend up to $1 million per year from this fund to take care of the growing list of repairs and upgrades to city facilities. There is now a backlog of essential project​s, exceeding $24 million, including work on the animal shelter, fire and emergency training facilities, roofs on various buildings, pool equipment, fuel tanks,​​ and a host of electrical, plumbing and life-safety equipment.

​All ​projects will have to be approved in open, public meetings by the City Council, where citizens can express their opinions. It is just common sense to give our elected city representatives the authority to make these decisions each year without having to schedule additional costly elections every time a project needs to be approved.​ ​

Letter to the Editor, Dec. 19
By Boulder City Review

Letters to the Editor, Dec. 12
By Boulder City Review

Letters to the Editor, Dec. 5
By Boulder City Review

Letters to the Editor, Nov. 28
By Boulder City Review

Letters to the Editor, Nov. 21
By Boulder City Review

Thanks to Scouts, residents for food donations

Letters to the Editor, Nov. 14
By Boulder City Review

Letters to the Editor, Nov. 7
By Boulder City Review