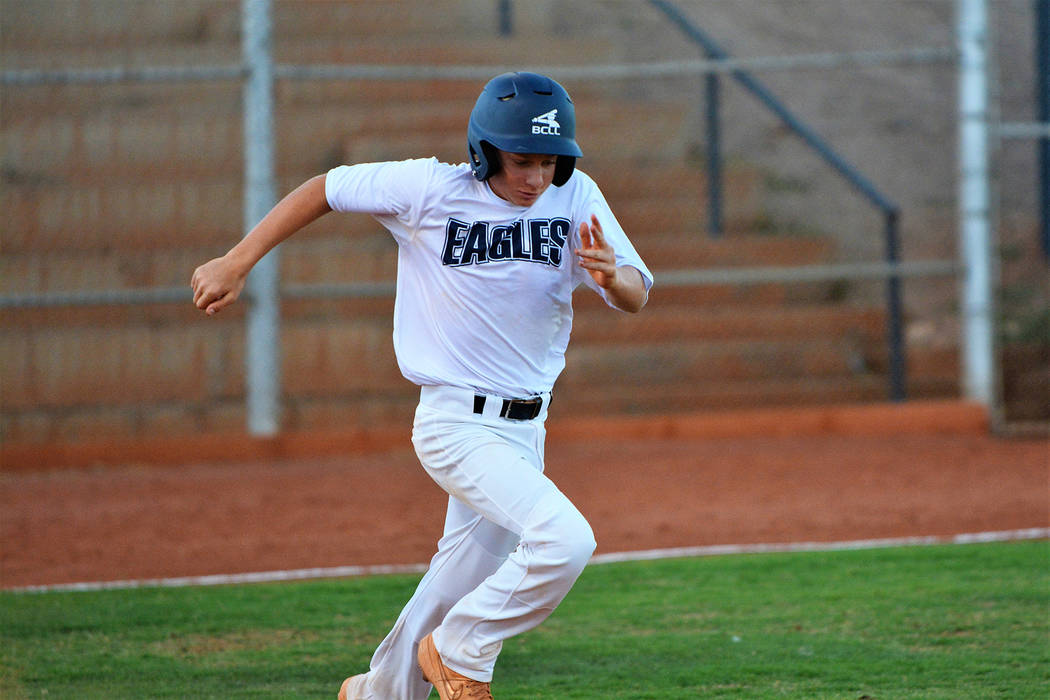 (Robert Vendettoli/Boulder City Review) Running a hard 90 to first base, Jeremy Spencer sprints down the base line against Palo Verde on Saturday, June 22. The Southern Nevada Eagles 14U team came away with a 8-4 victory in the Southern Nevada Connie Mack baseball league.

With both the Gators and Panthers feeder programs being two of the best and most consistent teams in the 4A high school classification, coach Alex Moore said he sees the pair of victories as a momentum builder.

“We like to challenge ourselves with our schedule — especially in high school, we try to schedule as many 4A teams a possible,” Moore said. “Wins like these for our eighth-graders, for our kids who will be coming into high school this year, it’s big. It’s a big deal for them to beat these kids and to see where they stack up and get them some confidence.”

Routing the Gators 16-6 in game one and 10-5 in game two, the Eagles’ bats came alive. Putting together 18 hits collectively in game one, the Eagles exploded for six runs in the third inning and seven runs in the fourth inning behind four runs batted in from Dodger Smith (3 for 3, two doubles) and Chase Calvez (3 for 4, one double).

Caleb Brown finished 3 for 3 with a pair of RBIs. Jeremy Spencer finished 2 for 2.

“The great thing about our offense is anyone can step up and carry the load at any time,” Moore said. “One through nine were solid and when the team gets hot as a whole, we have a great chance of winning games. You saw that against Green Valley.”

Defeating Palo Verde 8-4, the Eagles scored six runs in the third inning to put the game away early, behind a 4 for 4 performance from Calvez, who had an RBI.

Prepared for a tough doubleheader, the Eagles will travel to Pahrump Valley on Friday, June 28, in a meaningful game that has future rivalry implications.

“We’ve built up a rivalry with Pahrump Valley on the high school level the past few seasons,” Moore said. “This doubleheader is very important and is the first chance these guys get see it firsthand. A lot of our kids will be freshman this upcoming season so it’s important to do well and build that confidence early. Pahrump always has a good team and we play each other tough. It will be exciting on Friday.”