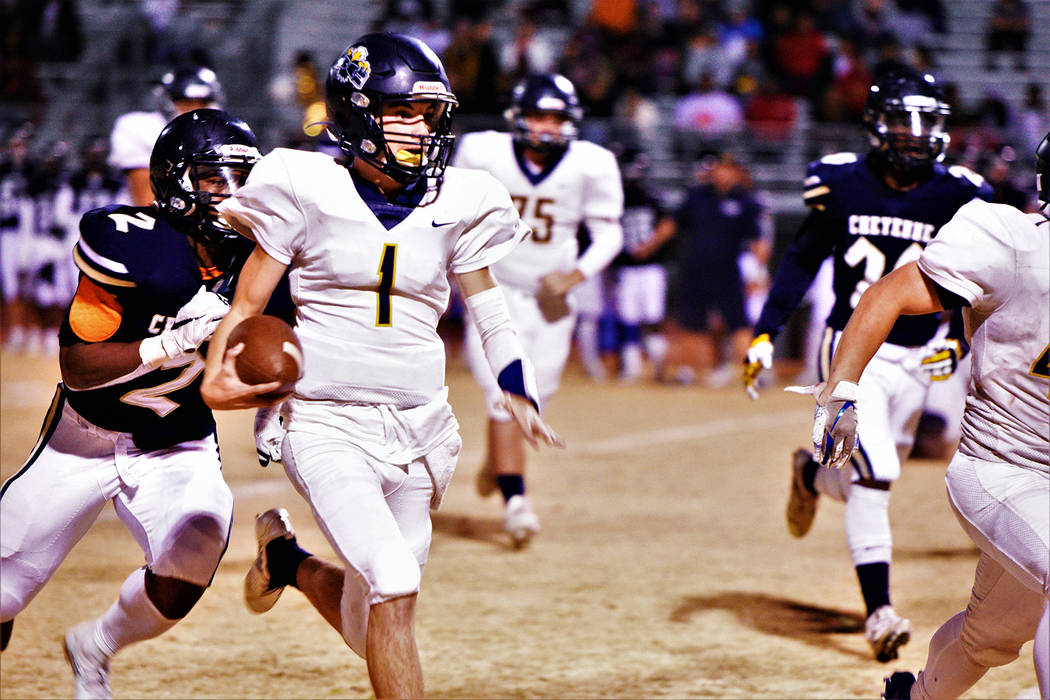 Boulder City High School’s football team lost 18-7 to Cheyenne on Friday, Nov. 8, falling short of advancing to the next round in the 3A classification state playoffs.

Staying afloat for the majority of the evening, late penalties and miscues on offense finished what will be chalked up as another successful season under head coach Chris Morelli and the staff with an 8-3 record.

“This was a really good season for us,” Morelli said. “We get a lot of these guys back next year and we can’t wait to get to work.”

Though the team will bring back a majority of their defense and skill position players, seniors quarterback Parker Reynolds and running back Devon Walker will be missed.

Scoring the Eagles’ lone touchdown, Reynolds rushed for 17 yards and a score, while completing 6 of 10 through the air for 75 yards. Walker rushed 62 yards on 16 carries.

Davis and Bahde also made eight tackles on the defensive end. Junior Deavin Lopez made four tackles with a fumble recovery.

Senior Cade Cowley made six tackles in his final outing, including one for a loss.

Running at Rancho San Rafael Park in Reno, the Lady Eagles finished with a score of 85, trailing champion Spring Creek (29) and Truckee (49).

“Their third-place finish was a huge accomplishment,” head coach Staci Selinger said. “It’s the highest state placing our girls team has had in many years.”

Sophomore Mary Henderson led the pack, finishing fourth with a time of 20:32, putting the finishing touches on a solid season with program.

“She ran a perfect race and has had a breakout season this year,” Selinger said. “She is going to be a fierce competitor in her next two cross-country seasons.”

“I am very happy with each and every one of their performances at state,” Staci Selinger said. “They each ran their best race when it counted. That’s what we trained all season for.”