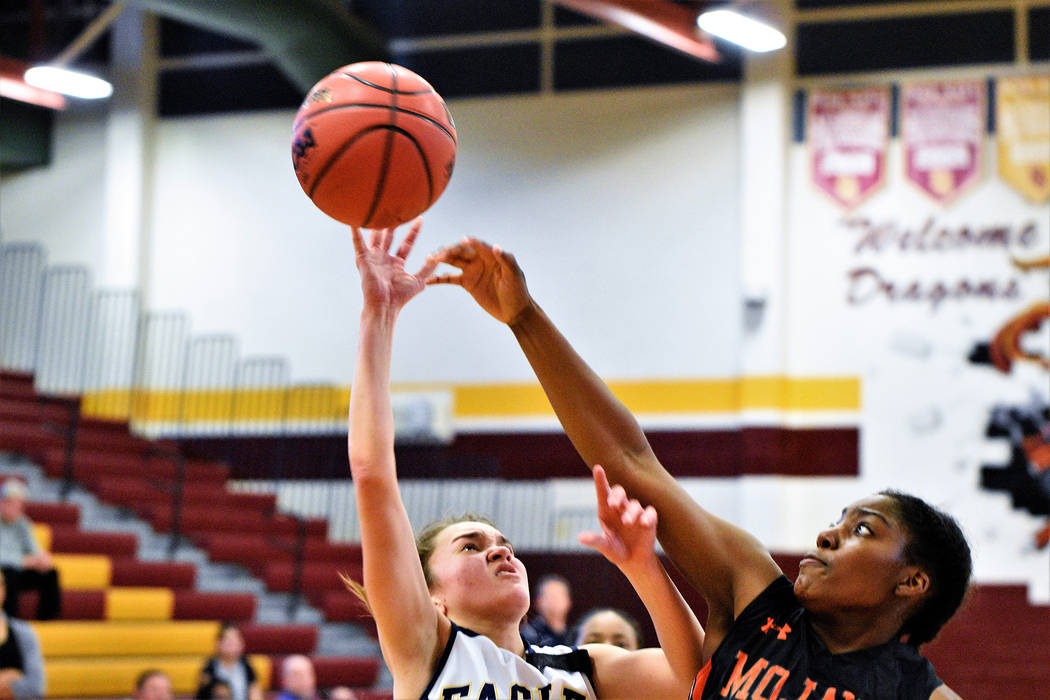 (Robert Vendettoli/Boulder City Review) Junior guard Keely Alexander slashes her way to the basketball for a layup against Mojave in the 3A Southern Region semifinals on Feb. 23. Boulder City lost to Churchill County on March 1 in the 3A state semifinals at Orleans Arena in Las Vegas.

“In the end, I’m really proud of this group,” head coach Kirk Estes said. “As a coaching staff, you really can’t ask for more than what they gave us. They literally played their hearts out and competed with every ounce of their being and that’s all you can ask for.”

Giving the Greenwave all they could handle in the first half, including consistent defensive pressure, the Lady Eagles went into halftime tied 17-17.

“The coaches and I set up a game plan for the girls and they executed early on and had a very good team frustrated,” Estes said. “They were a team that was physically superior to us and the girls bought in to everything we taught at practice and we really played solid defense on them. In the first half everything worked beautifully for us.”

Backed by the strong play of junior guard Keely Alexander and forward Ellie Howard, the Lady Eagles came out in the second half confident to make their first 3A state title game appearance since 2014, but ran out of gas due to lack of depth.

“In the second half Churchill County’s athleticism and our lack of depth really caught up with us,” Estes said. “We got tired and just couldn’t keep up with their athleticism.”

Coach Estes is already prepping for next season, rallying his returning letter winners after the defeat. Returning Howard, Alexander and Manns, who were all All-Sunrise League selections this past season, Kirk Estes challenged his remaining core to continue to push themselves to get better in hopes of a return trip to the state tournament in the near future.

“We had a very shallow team this year as far as girls who played,” he said. “We had a lot of girls who weren’t quite ready for that level and I challenged them after we lost our last game. I told them that a lot of minutes are going to be available and where you really excel as a player is in the offseason. I told them if anyone wants to be a starter, then they need to be in our open gym consistently and spending the time making themselves better basketball players.”