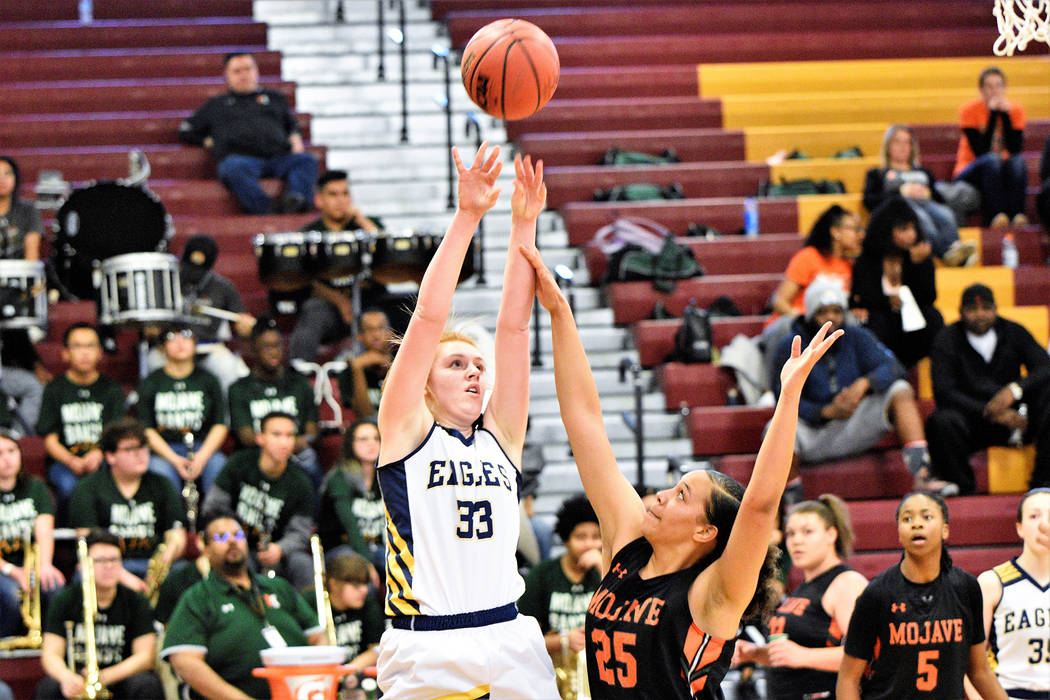 (Robert Vendettoli/Boulder City Review) Boulder City High School's junior forward Ellie Howard, seen rising above a Mojave defender in the 3A Southern Region semifinals Feb. 23, 2019, was named the 3A player of the year.

Leading their respective programs, girls head coach Kirk Estes and boys head coach John Balistere were recognized as coaches of the year for the Sunrise League.

“I think it’s great honor for our individual programs,” Balistere said. “I know my staff and Kirk’s does a great job of preparing our teams, but I’m a firm believer that once the ball is in the air it’s up to the players to make plays. We have great players that buy into what we’re feeding and execute. It’s a credit to both our coaches’ staffs and players.”

Howard was one of all five Lady Eagles starters to earn postseason accolades after helping the girls team reach the 3A state tournament for the first time since 2014,

“Ellie was the only dominant forward in our league,” Estes said. “She created nightmare matchups for virtually everybody we played, and the girls who played on the court with her did a fantastic job of getting her the basketball in great spots. When we fed her, she delivered.”

Dominant inside the paint and on the boards for the Lady Eagles, Howard averaged 17.5 points and 12.5 rebounds per game, while adding 1.5 blocked shots on the defensive end.

Crediting her teammates for her success, Howard said she was pleased that each member of the Lady Eagles’ starting five received all-league nominations, ultimately helping her win player of the year.

“I feel really honored to be chosen as player of the year,” Howard said. “This accolade is really a team award. My teammates helped me get better and kept encouraging me to be my best self. Keely (Alexander), Madison (Manns) and Hannah (Estes) always looked to feed me the ball. I had foot surgery in August, and I didn’t think I’d be ready to play by November, but I was able to. I’ve been really blessed to get to where I am.”

Howard was named to the first team for the state as well as for the All-Southern Region.

Alexander was named to the All-Southern Region second team after an all-around season in which she averaged 9.8 points, five rebounds, 3.5 assists and 3.1 steals per game.

Leading the boys program to its first league championship since 2012, Thomas was instrumental in the Eagles’ rise to prominence this season, using last year’s award snubs as motivation to be the league’s best player this season.

“It’s a tremendous honor to win player of the year for the league,” Thomas said. “Looking back on last year when I was named second team all-league, it gave me a certain wave of motivation to be better for the team as well as to accomplish some personal goals.”

Leaving no doubt this season, Thomas made the first team All-State, as well as first team for the All-Southern Region.