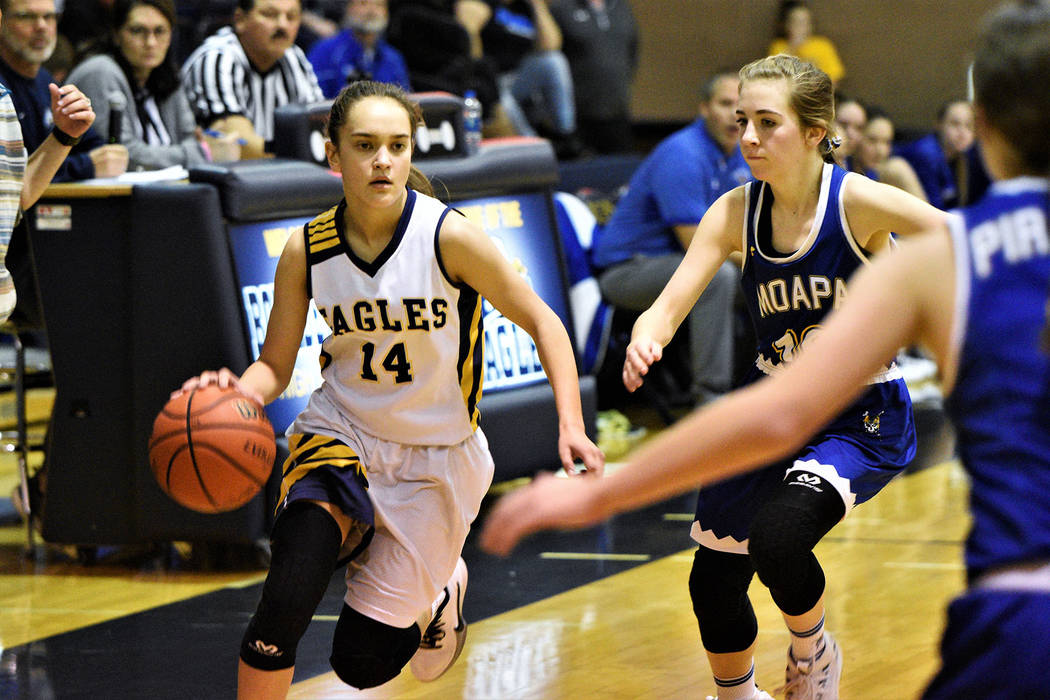 (Robert Vendettoli/Boulder City Review) Guard Keely Alexander, a senior at Boulder City High School, drives the lane with authority to the basket against Moapa Valley on Tuesday, Jan. 14, 2020, in the team’s 44-40 victory.

Ahead 42-40 with two seconds remaining after some late-game heroics from Moapa Valley cut a 10-point lead, Alexander stepped to the free throw line with two attempts, nailing both to ice the game.

“I never had a doubt when she went up to the line,” head coach Lisa Foster said. “I knew she was going to make both free throws. That’s just her.”

Scoring a game-high 18 points for the Lady Eagles, Alexander put any existing pressure aside to help lead her team to victory.

“I was kind of in the moment when I stepped to the line,” Alexander said. “I told myself that if I’m feeling any kind of pressure, that I needed to let it go. I knew those two free throws were the most important thing in the game and I couldn’t let anything get in the way of that.”

Gaining key contributions from senior Ellie Howard (11 points) and junior Callie Williams (eight points), this was the Lady Eagles’ second victory this season over the Pirates, a team they know they’re going to battle down to the wire with for first place in the 3A Sunrise League.

“It feels really good to earn this win,” Alexander said. “Winning a game like this takes a team effort. It takes everyone to beat a team like them. We’re all fighting for first place, so this game means so much considering they’re our biggest rival and one of the best teams in the league.”

Winners of three consecutive games, the Lady Eagles defeated Chaparral 62-40 on Jan. 8 and 4A opponent Cheyenne 62-53 on Friday, Jan 10.

“The girls are doing really good,” Foster said. “I’m super excited. We can be really good if they continue to play like this.”

Currently in first place in the 3A Sunrise standings, the Lady Eagles will travel to rival Virgin Valley today, Jan. 16, followed by a home game against Somerset Academy Sky Pointe on Wednesday, Jan. 22.