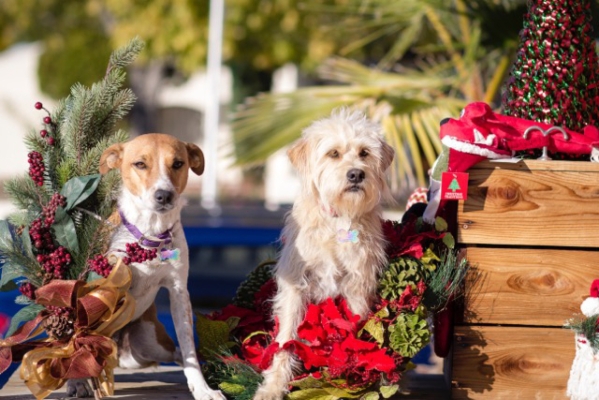 On Saturday, Nov. 7, my neighbors’ two dogs started barking around noon. I called Boulder City Animal Control around 2:30 p.m. and was told she (Animal Control Supervisor Ann Inabnitt) would try to contact them by phone as she was busy. I called again at 3:30 p.m. and got a recording that the shelter was closed. The dogs barked until 7:30 p.m.

I called animal control and was told no contact was made by phone; they were busy with a sheep roundup on U.S. Highway 95, but would make contact.

The next Monday, I called animal control and was told they were busy. They had two dog bites to take care of, and that dog barking was not on her or animal control’s priority list.

I called again and was told to call police if it continued. I call the police and dispatch said someone would be sent out to the house.

At 12:30 a.m., I was awakened by police who said someone had spray painted our garage door, but no one was caught. I filled out an incident report with police.

My complaint is the animal control person is no better than the last one who did not do her job but took the money. Where is the police chief and who is in charge of animal control? It looks like a cover-up by the police department.

Budget may have affected decisions regarding animals

Lets not throw Mary Jo Frazier under the bus! The two dogs shown in the Christmas photo are mine. The have both been in “trouble” with her. She knows them by name. She has always been courteous with me and kind to my dogs when they have decided to get themselves into mischief.

The terrier got into a fight with another dog and I paid over $2,500 in emergency care for the other dog involved. It happened on a Sunday night around 8 p.m. so we had to go into Las Vegas for the emergency care. The owner of the other dog was understandably very upset and emotional. She went onto Boulder City social media and demanded that my dog be put down! Mary Jo Frazier refused to put my dog down.

Mary Jo Frazier’s position required her to have to make difficult decisions. Not spending taxpayer funds on veterinary visits was obviously something the powers that be approved of. How many $2,500 vet bills was she budgeted for?

Ex-animal control supervisor should be prosecuted

I read the article in the Las Vegas Review-Journal about Mary Jo Frazier. It made me sick. Just because she quit her position as the animal control supervisor doesn’t excuse her from being prosecuted for killing animals. She was suppose to serve and protect the precious babies.

This scumbag needs to sit in jail for the rest of her life. Anyone else who was brought up on charges of animal cruelty would have paid dearly for their crime.

I would like to know what kind of cover up is going on in the police department that they aren’t pursuing this hideous crime.

Over the few last months I have been asked by a number of people why I no longer write letters to the editor. The short answer is simple: With the exception of the names and the faces, nothing has really changed in Boulder City. The long answer is that accountability and consequences are as rare now as they were five, 15 or even 30 years ago.

While the city may be patting itself on the back for the fleet of electric vehicles it put into service, any potential benefits from reduced emissions are going to be lost now that the Boulder City Police Department has gone back to the practice of leaving empty patrol vehicles idling at curbside. More people might walk if the sidewalks and streets were in better condition. One of the first casualties of pointless public spending is infrastructure.

I feel no sense of loss over the demolition of the old hospital. Unless it can be proven that Randy Schams and Jim Giannosa broke the law, they had every right to do what they did. It is called free enterprise. No one objected when Boulder City’s historic old post office was torn down to make way for a parking lot for the Boulder Dam Credit Union, and no one has as yet objected to Milo’s (Hurst) motley color scheme for the old service station in the historic downtown.

I seldom hear anyone mention Bill Smith these days. Bill was one of the few people who can truly be said to have loved this town. Bill provided free rent to the community college system so they could operate a satellite campus in Boulder City. When the college pulled out, Bill donated the building to the city. That the building remains unused, save for an occasional performance by the Red Mountain Music Co., is a testament to current leadership’s lack of imagination and initiative.

I have been asked why I do not move and my response is why should I? I have a nice home, with a well-cared for yard, and enjoy a panoramic view of Lake Mead. My regular visitors are rabbits and quail. I have a wall and two gates that largely keep Boulder City out. This suits me as I have come to realize that people who remain in abusive relationships, whether their partners are conjugal or elected, do so because they enjoy the abuse.

Impact of using fossil fuels must be considered

Rep. Joe Heck recently replied to me about his stand on the Environmental Protection Agency’s Clean Power Plan. I believe the core of the letter can be summed up with his statement: “While improving our air quality and protecting our environment are critical, these should not be done through the implementation of overly burdensome regulations that raise costs on families and small businesses.”

While that is true, we cannot ignore the cumulative impact of doing business as usual. Our current standard of living is not completely based on initiative, creativity and free-market capitalism. Unfortunately, there are pesky externalities sometimes mentioned by economists.

Heck doesn’t seem to take into account that one of those, the free release of carbon dioxide from burning fossil fuels, has been a major contributing factor in the increase of its concentration in the atmosphere and oceans to dangerous levels. Dangerous because they have resulted in increased heat in the atmosphere and acidity in the oceans. Continued increases will have increasingly large effects of more dangerous storms and droughts, loss of ice and higher ocean levels, global shifts in the patterns of air and water currents, and substantive changes in the food chains of the oceans.

Against that atrocious legacy which we are leaving our offspring, Heck would balance costs of energy to “families and small businesses.” Costs that have been and continue to be artificially low because the complete impact of energy production has not been paid. Costs that virtually all life forms on the globe are impacted by, while the benefits have been reaped by the technologically blessed.

It is decades past the time we should have implemented strategies to change; it won’t be easier if we put it off because it is painful to do so now. Our leadership needs to face up to the challenges that must be faced, not protecting vested short-term interests such as the coal industry. Bring the externalities into the market place (price carbon) and let the true costs determine how the economy should be structured. Get on with a real attempt to pass on a decent future.

Letter to the Editor, Dec. 19
By Boulder City Review

Letters to the Editor, Dec. 12
By Boulder City Review

Letters to the Editor, Dec. 5
By Boulder City Review

Letters to the Editor, Nov. 28
By Boulder City Review

Letters to the Editor, Nov. 21
By Boulder City Review

Thanks to Scouts, residents for food donations

Letters to the Editor, Nov. 14
By Boulder City Review

Letters to the Editor, Nov. 7
By Boulder City Review