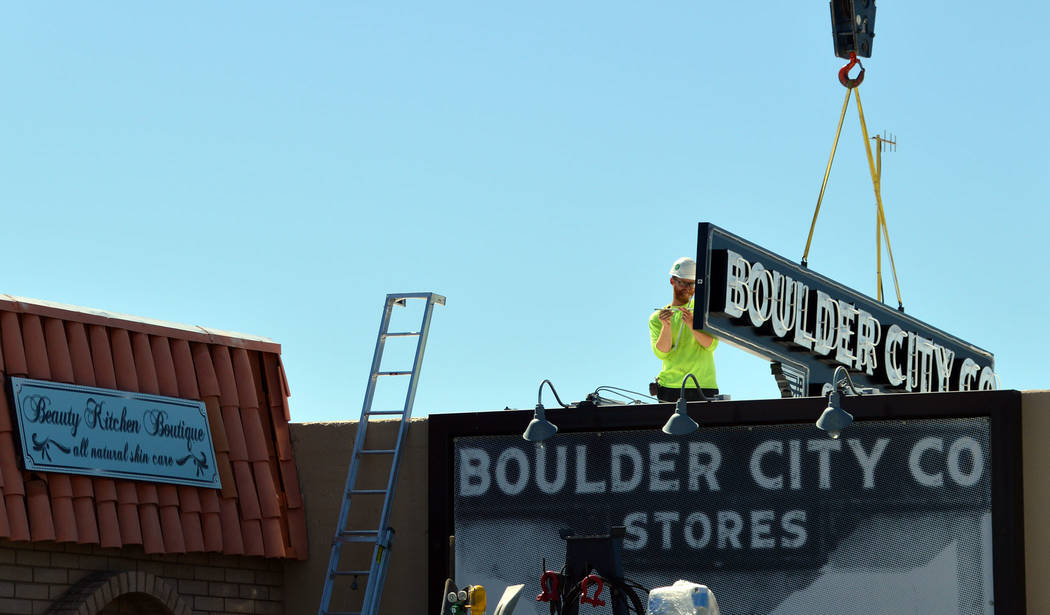 (Celia Shortt Goodyear/Boulder City Review) A worker with High Impact Signs installs a new sign for the Boulder City Co. Store, 525 Avenue B. Owner Tara Bertoli said the sign is a replica of the original one that was at the store when Six Companies operated it in the 1930s for the Hoover Dam workers. 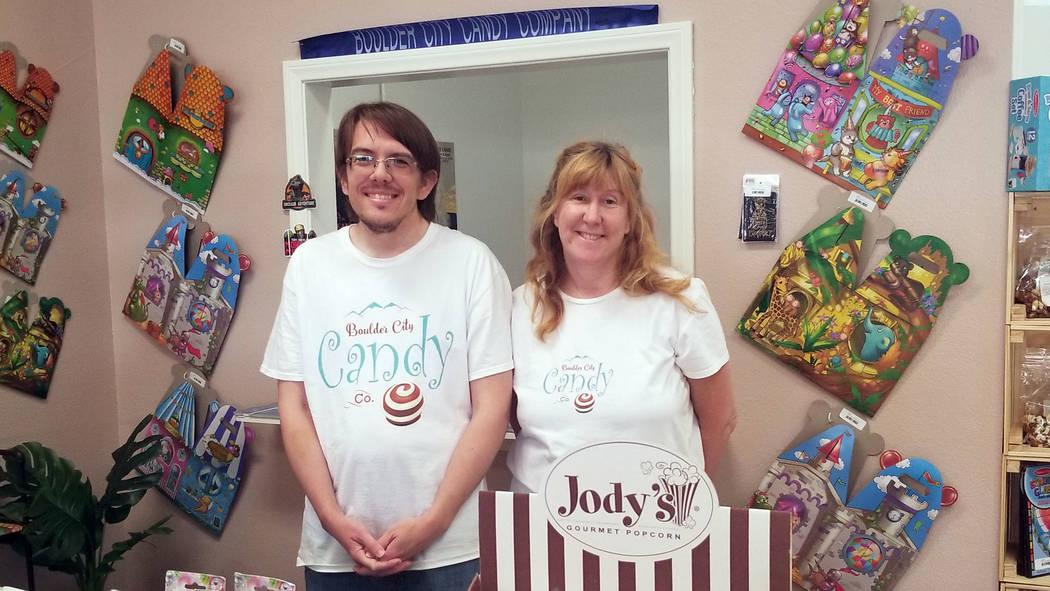 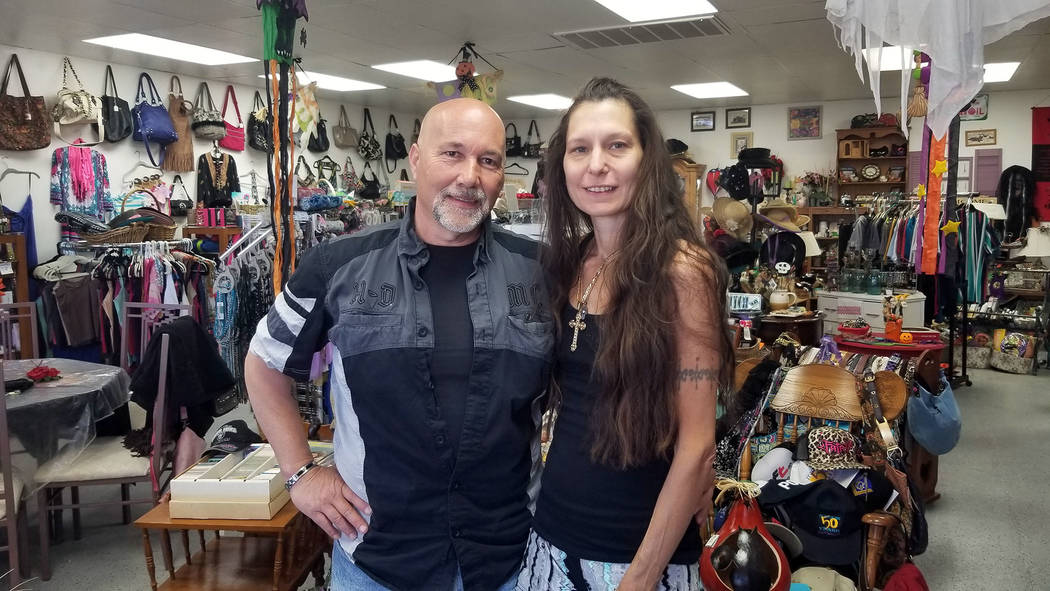 (Celia Shortt Goodyear/Boulder City Review) Darren Mancusi and his wife, Lucia Patane, are the owners of Treasure Finds, 1660 Boulder City Parkway. Mancusi said he thought Interstate 11's opening would be a good thing for his business because more visitors could get to his store because of the reduced traffic. 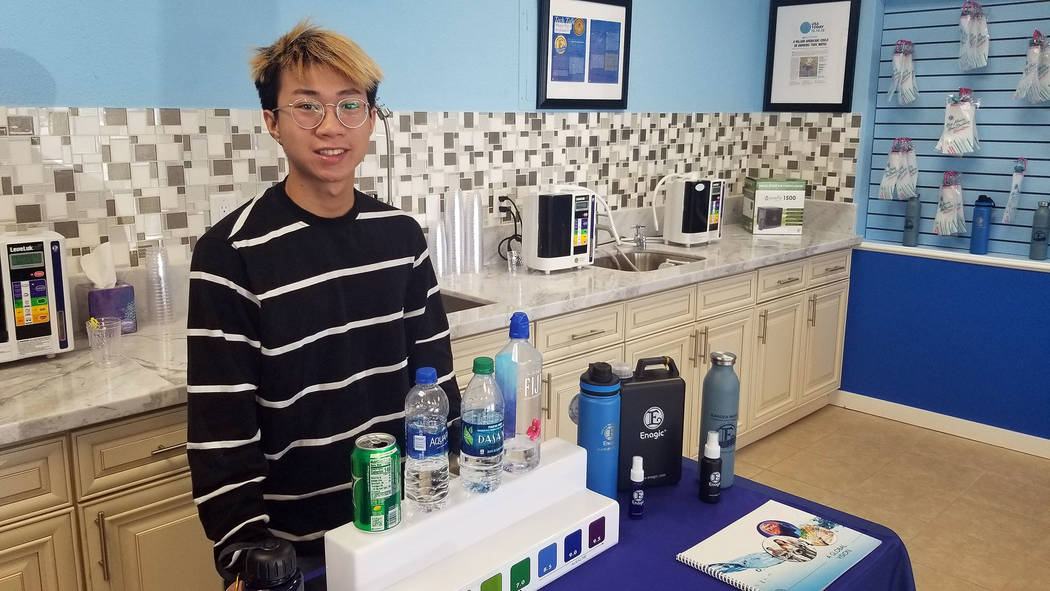 Boulder City has seen a small business boom despite a 30% to 40% drop in traffic after Interstate 11 opened a year ago.

According to the city, it has issued 54 new business licenses, excluding home businesses since Aug. 9, 2018, the day I-11 opened. Additionally, Community Development Director Michael Mays said the retail space vacancy rate is down to 4.5%, which is lower than in Las Vegas, and local spending has increased by 8%.

“I was happy,” said Tara Bertoli, owner of the Boulder City Co. Store, about starting her business after I-11 opened. “I was like, get the semis out of here.”

Bertoli said she chose to open her store because the town needed it.

“I grew up here,” she said. “We didn’t have a store selling Boulder City items. The town didn’t have a brand, and I wanted to help give them one.”

Bertoli’s store is in the downtown historic district and she is one of several business owners who was not worried by less traffic coming through town.

Lisa Savy, owner of Boulder City Candy Co., is another.

Savy opened her store at 1643 Boulder City Parkway earlier this month. She said she chose Boulder City because she lives here and because of the community.

“Everyone in Boulder City has been really supportive … . Everyone wants to help everyone else,” she said. “That’s the great thing about Boulder City.”

Other people chose to do business in town because they fell in love with the area.

Darren Mancusi and his wife, Lucia Patane, moved to Boulder City and opened their gift store, Treasure Finds, after visiting the town for years.

“I have no complaints at all,” he said. “I wanted to do a business in the town I bought a house … . I just like the community here, the people.”

He said he thought I-11 would actually be a good thing for his business at 1660 Boulder City Parkway.

“I felt it would increase the traffic because of a lot of people wouldn’t come to this side of town because of the traffic,” he said.

Mancusi said he’s had local visitors as well as others from over the hill and as far away as North Las Vegas.

The Corys are another set of new business owners who fell in love with Boulder City and decided to put down roots and reopen a business here.

“We love it,” said Darcy Cory, co-owner of Square 1 Gallery, 1638 Boulder City Parkway. “We like the atmosphere of all the local businesses. It’s upbeat … . The location is great for us.”

“It’s a small community and we like it for that,” added Kevin Cory. “We want to focus on local businesses.”

Boulder City is also now home to Kangen Water Store, 1404-B Boulder City Parkway, which sells water that has gone through an ionization process and kept all its natural nutrients.

Owner Brian Nguyen said this type of water can help medical conditions which is one reason why he decided to come to town.

“A lot of people here have health issues,” he said.

The store sells medical grade Enagic water ionizer machines from Japanese company Enagic International and offers financing options for them. It also offers a water share club that allows people to get up to 10 gallons of ionized water a day every day of the month.

“We are pleased to see the number of new businesses come to Boulder City within the last year,” said Raffi Festekjian, economic development coordinator. “We look forward to working with the newest members of our business community, for as they succeed, so does the community.”