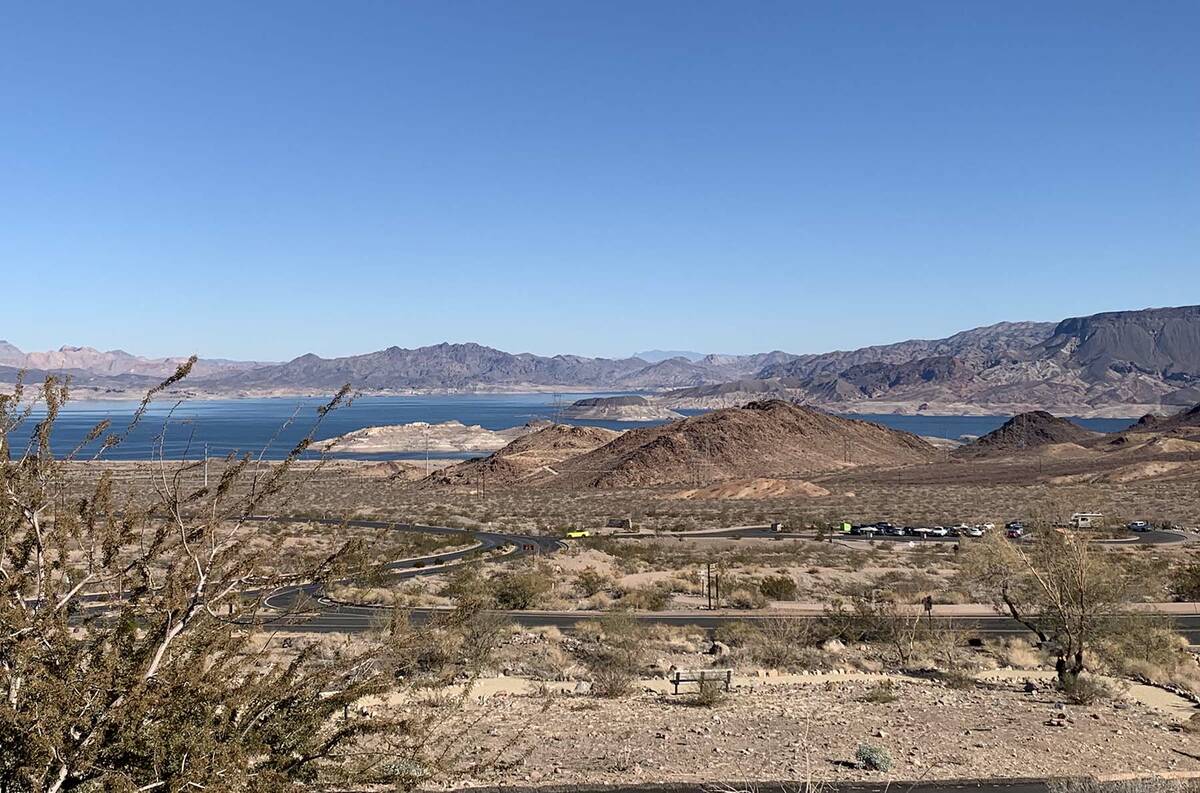 (Hali Bernstein Saylor/Boulder City Review) The future of Lake Mead, as seen Saturday, Dec. 17, was discussed by federal officials earlier this month when hundreds of Colorado River water users and managers gathered in Las Vegas for their annual conference.

Speaking to hundreds of Colorado River water users and managers gathered in Las Vegas, Deputy Secretary of the Interior Tommy Beaudreau said that the 23-year megadrought that has gripped the river basin is one of the biggest challenges facing the United States and Mexico.

“Without immediate and decisive actions, elevations at Lake Powell and Mead could force the system to stop functioning. That’s an intolerable condition that we won’t allow to happen,” Beaudreau told the water conference.

The future of the nation’s two largest reservoirs, Lake Mead and Lake Powell, took center stage at the annual gathering of the Colorado River Water Users Association in Las Vegas, with federal officials detailing grim projections that show a risk that the system could crash and leave water unable to pass through Hoover Dam as early as 2025.

Hotter and drier conditions fueled by climate change and chronic overuse of the dwindling river have driven the system that supplies drinking water to 40 million people in the Southwestern U.S. and Mexico to a point of crisis.

Bureau of Reclamation officials at the conference showed projections for Lake Mead and Lake Powell under varying scenarios. Under one such scenario — which Reclamation officials noted may not represent the more dire of outlooks — Lake Mead could drop below its ability to generate hydropower at Hoover Dam by 2024, and fall to its “dead pool” elevation of 895 feet by 2025, meaning that water would no longer be able to pass through the dam downstream to California, Arizona and Mexico.

Bureau of Reclamation Commissioner Camille Touton in June tasked the seven Colorado River basin states to develop a plan to cut water use from the river by as much as 4 million acre-feet starting next year, or about 30 percent of the river’s recent annual flows, in order to prevent that future.

One deadline came and went in August with no deal in place. States have continued to work toward finding some form of consensus in recent months, but nothing concrete has emerged.

Previous efforts to negotiate the cuts along the Colorado River have taken years before agreements are reached. But the timeline to come up with new cuts — cuts that are magnitudes higher than anything negotiated before — must be done in just months.

In an interview Friday, Touton admitted that it is “very much an expedited timeline,” but said she has full confidence that something will be developed between the seven states over the next five to six weeks.

“It is what the river and the communities need and demand for this moment,” she said.

In October, the bureau kicked off the process of modifying the current drought guidelines for the Colorado, and will look at any proposals submitted by the states while also working to develop a plan that would allow the federal government to take unilateral action and mandate cuts if need be.

Another deadline of sorts came Tuesday, Dec. 20, the last day for states to submit proposals for how to modify those drought guidelines, but states would have until the end of January to continue working toward coming to an agreement.

John Entsminger, general manager of the Southern Nevada Water Authority, said in an interview Dec. 15 that the time crunch could have been avoided had the federal government started the guideline revision process two years ago at least.

Representatives from the basin states met again during the conference in Las Vegas, and Entsminger said he feels like some progress is finally being made.

“I’m slightly more optimistic than I was on Monday,” Entsminger said. “For the first time in 2022, I feel like there’s a path toward consensus. But the way the river works, by next Monday the wheels might have come off again.”

The Southern Nevada Water Authority submitted its own proposal Tuesday, Dec. 20, that lays out a plan for how to conserve water across the basin and stabilize the Colorado River and its major reservoirs, Entsminger said. The plan seeks drastic cuts and altering operations and releases from lakes Mead and Powell.

Entsminger has worked this week to get other states to sign onto his plan, and feels like there’s been some modest progress on that front. So far no other state has signed on to the water authority’s plan. But no one has told them “hell no” this time around, either, he said.

Much of the focus in the negotiations has fallen on the lower basin states, and specifically Arizona and California, where roughly 70 percent of the Colorado River’s waters are consumed annually on average. California recently committed to conserve up to 400,000 acre-feet of water per year, or about 9 percent of the state’s annual allotment, as part of an agreement with the federal government to fund restoration efforts at the Salton Sea.

And if the federal government and states are going to protect the infrastructure at both Lake Powell and Lake Mead, Entsminger and the authority believe the Bureau of Reclamation’s high-end ask for the cuts of 4 million acre-feet might be too conservative. The authority’s modeling shows that in order to achieve those goals amid the arid outlook for the basin, the states may need to cut as much as 6 million acre-feet — or nearly half of the river’s average yearly flows — by 2025.

David Palumbo, deputy commissioner of Reclamation, said during a panel Dec. 15 at the conference that climate change is forcing officials to alter how they think about the future of the river.

Historically, they have been able to rely upon the long-term record of the river to plan for the future. Even years that see near-average snowpack are proving inadequate to supply the river the way it has previously.

“We can’t rely on what we’ve done in the past to be adequate for the future,” he said.

“The time for strongly worded letters has passed,” Cullom said.