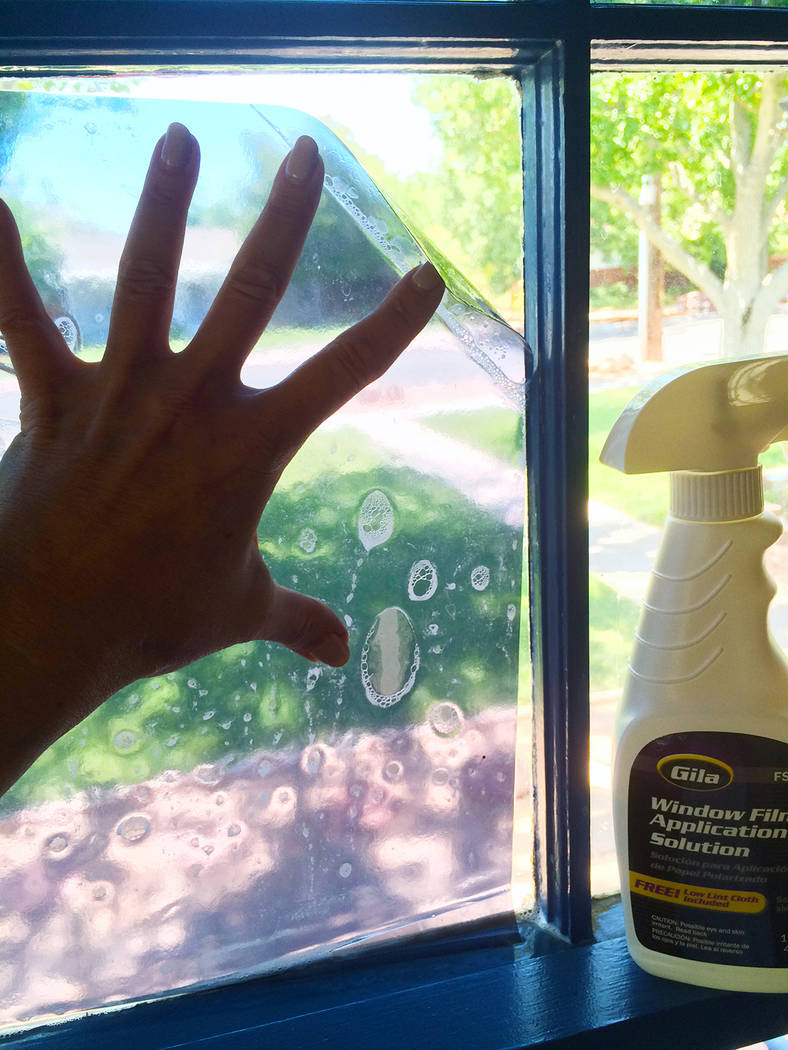 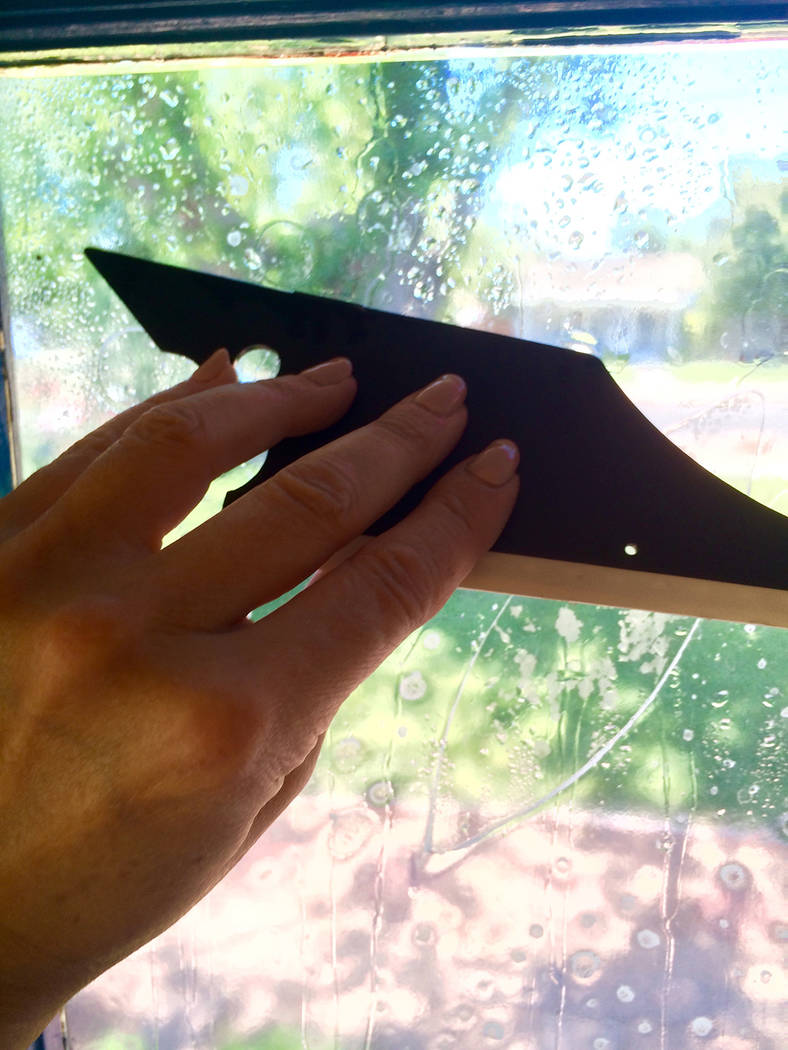 Norma Vally A squeegee is essential in removing bubbles and wrinkles when applying window tint. 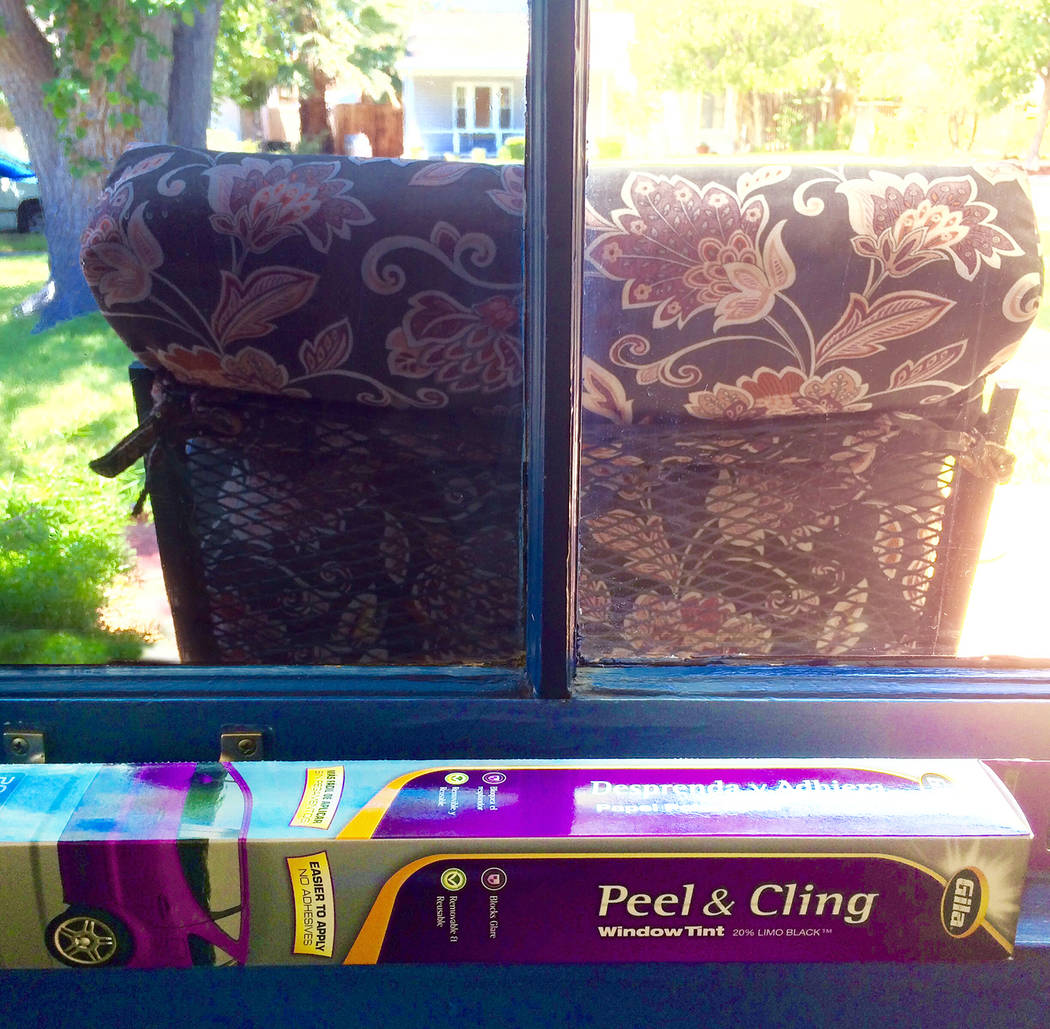 Norma Vally Peel and cling window tint is easy to apply properly and makes a visible difference in reducing the amount of sunlight that enters your home.

I thought about the tourists who came to Las Vegas last week eager for some poolside sun and fun but instead got the cold and wet shoulder. Yet even with a May 1 cold snap, when those sun rays poked through, there was no denying the Earth started her tilt toward the sun.

When we start the ascent to the summer equinox, you can really notice it in your car. Driving without tinted windows in Southern Nevada is akin to walking barefoot on blacktop — an issue I recently had to resolve. While the rear windows of my car are tinted, the passenger and driver’s side windows aren’t. Not ready for another season of frying my skin and brain cells, I priced out a local tinter.

I thought that wasn’t so bad.

I may have a few fried brain cells, but this guy’s out of his mind altogether. Walking away, I thought, “I’m going to do this myself,” and off I went the auto store.

With an investment of under 20 bucks, I was thrilled with the job I did on my now 80 percent light blocked car windows (20 percent visible light transmission). The tint degree is measured in VLT, where the lower the number, the greater the tint, which was a little confusing at first.

Drawn to the “easiest install” labeling, I chose the “peel and cling” type, as opposed to the adhesive one. The peel and cling was very forgiving. If the film goes on lopsided, just peel it off, realign and start over.

I know I’m over the state’s legal tint limit, which is 35 percent VLT for driver and passenger windows. Worse cast, I can swiftly peel it off to quell a police officer’s tint ticket temptation.

The difference the tint made was remarkable. It cut down glare and heat and made driving pleasant again. Excited by how well it worked and with most of the roll left over, I searched for more windows to tint.

I remembered the unwelcomed morning sunlight that comes in through my bedroom window, even with the blinds closed. Car tint on a house window? Why not? It worked great.

Noticing how much more comfortable the bedroom was prompted an all-out tinting frenzy. Now with almost the entire house tinted, the heat gain has diminished dramatically.

The term “heat gain” refers to the transfer of heat into your home from various sources, with the greatest source being the sun. As the season heats up, so do our houses as solar radiation intensifies. If you’re interested in reducing heat gain, saving on power bills and creating a mellow daylight hue, consider this DIY tinting project:

■ Pick out your tint — 20 percent VLT peel and cling is my first choice.

■ Prep your windows by giving them a good cleaning. Once cleaned, wipe again with a lint-free cloth.

■ Take your window measurements, being as exacting as possible.

■ Roll out the film and make your cuts with a sharp blade and straight edge.

■ Peel off the paper liner and quickly spray the window surface with the solution. While the glass is good and wet, position the tint on the surface, matching up the corners. Now spray the front of the tint and, using the squeegee, firmly glide out bubbles to the edges, being sure the surface is slippery.