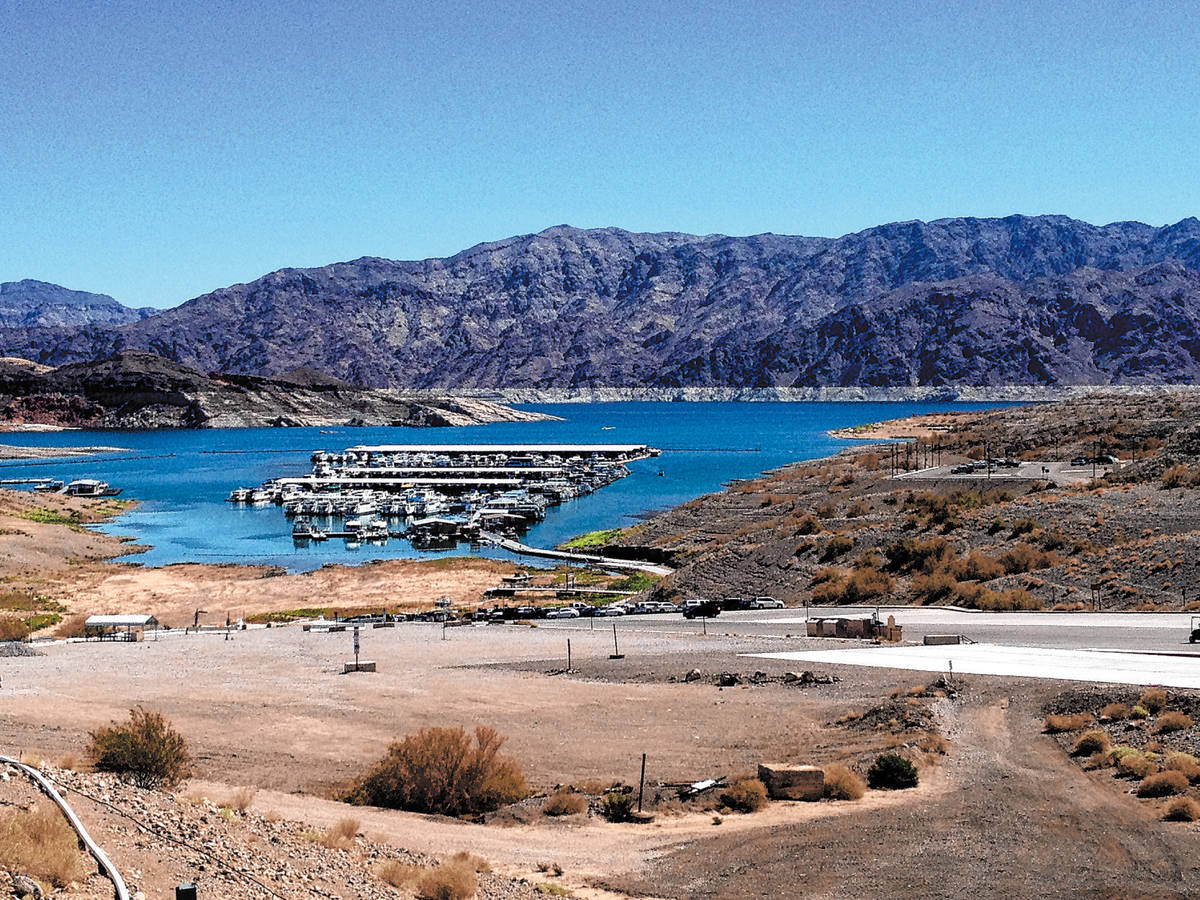 Callville Bay, as seen in this photo from 2014, was once a bustling city that served as a stopping point for those traveling to Salt Lake City and shipping point for farms and ranches in Las Vegas.

It was a long, difficult and hard journey, crossing the Atlantic, then traveling westward by land to the Utah territory. Thus, leaders in Salt Lake City sought a way to bring in the converts that would avoid the hostile sections of the U.S.

Historians say a plan was adopted to bring these people across the Atlantic to Panama. From there, they would travel up the Gulf of California to the Colorado River, where they would embark at Yuma, Arizona, and go up the river as far as they could go, then travel overland to Salt Lake City.

Accordingly, elder Anson Call was assigned the task of establishing a port and a community on the river and building a road to the Pahranagat Valley. By the time Call and his crew were able to get things going, the Civil War was raging back East.

However, on Dec. 17, 1864, while Confederate forces were being routed from their defense of Nashville, Tennessee, Call and his men were working on the foundations for a stone building a short distance above Black Canyon, which is now the location of Hoover Dam and Lake Mead. They erected a landing, corrals and other buildings. They christened it “Callville Fort,” which was later just called Callville.

Historian Don Ashbaugh notes that within the next two years they had also built 140 miles of road to the Pahranagat Valley and linked it to roads to Salt Lake City.

The flow of emigrants to Utah began in more earnest. Two steamboats, the Esmeralda and the Nina Tilden made regular trips between Yuma, up river over 400 miles to Callville. Ashbaugh wrote that for the next five years “the little colony was a busy place.”

In “Croffut’s Pacific Coastal Guide,” published in 1879, he noted there was a steamboat stop at El Dorado also, “but in the season of high water the river is navigable to Callville.”

Callville, small as it was, not only served as traffic to Salt Lake City but also as a shipping point for Mormon farms to the north and the ranch and trail of what later became Las Vegas.

But five years hence was now 1869 and the new transcontinental railroad, completed on May 10, 1869, cut the travel time across the U.S. from six months to six days. This had a dampening effect on Callville and trading dropped off. By late summer the steamboats quit coming and the landing was abandoned.

It was not too long after that a mail carrier out of St. George, Utah, came upon three desperate horse thieves, who were being pursued by a posse. They had taken refuge in an abandoned building in Callville. With their horses worn to exhaustion and surrounded by miles of empty desert, the situation looked hopeless; capture was imminent.

Then one of the thieves had a flash of inspiration. They pried the giant wooden doors from the stone walls of an old church warehouse. Leaving their exhausted horses behind, they fashioned the wooden doors into a makeshift raft. Piling saddles and baggage onto the large, heavy wooden doors, they pushed the raft into the waters of the Colorado and off they went, never to be heard from again.

Callville Bay is today a waterway on the northwestern side of Lake Mead. It features a marina and camping resort. It is situated east of Las Vegas and upstream from Las Vegas Bay.

A far cry though from the days when the small community was a busy, active steamboat port used for shipping freight, and passengers, to Salt Lake City, it is now submerged along with St. Thomas under the waters of the Colorado River in the Lake Mead National Recreation Area behind Hoover Dam.

Nevertheless, Nevada’s seaport is a story of particular interest when one goes in search of Nevada’s Yesteryear.