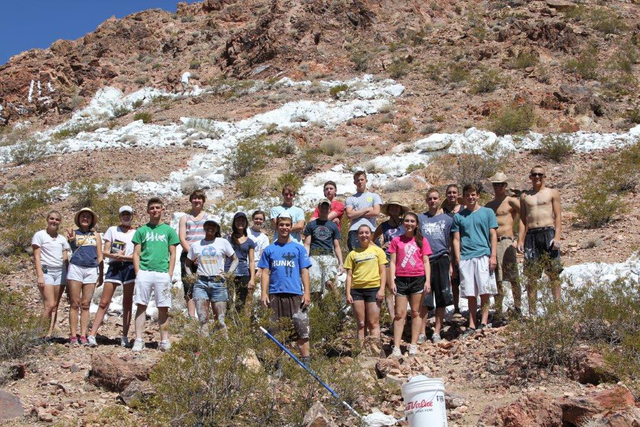 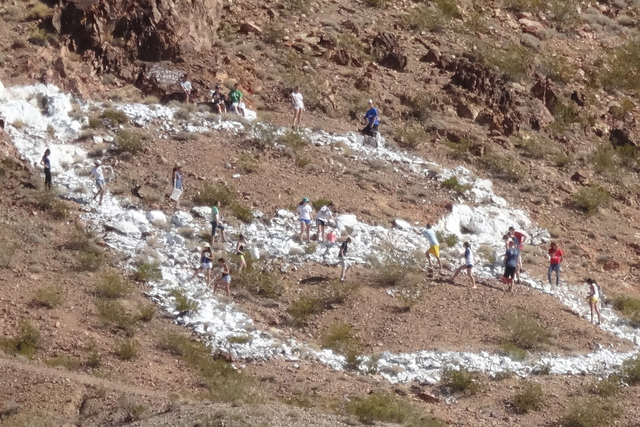 In a giant show of school and community spirit, a group of about 50 Boulder City High School students and alumni whitewashed the B and C on the hillside on the north side of the city Saturday.

The daylong task involved lugging 50-pound bags of lime and buckets of water up the mountain to the letters’ location. There, the lime was mixed with water to create a whitewash that was mopped over the rocks.

“Strong, cute boys are the answer,” she added with a sly smile.

The letters, which are about 100 feet tall, had to be painted on the sides as well as the tops. According to Herr, they had to have spotters at the bottom of the hill to check their progress because it was difficult to see if any spots were missed when applying the whitewash.

The last time the B and C were whitewashed was in 2012 as part of the Senior Sunrise activities to start the school year.

She said the C was added to avoid any confusion with Basic High School. Now, because of its location, the student council is sponsoring a spirit campaign to prevent students from associating the letters with the nearby Bootleg Canyon.

“We want to get the kids in spirit,” said Emma Herr, who is following in her parents footsteps.

With two younger brothers, including Nolan, who will be a freshman in the fall and has already committed to joining the student council, the Herrs’ tradition of caring for the BC will continue.

Cheryl Herr said she also would like to see if whitewashing the letters can become an annual senior class project.

“The kids did enjoy it and they made good memories,” she added.

Emma Herr said growing up in Boulder City and meeting with alumni is like meeting celebrities. “What’s cool about Boulder City (High School) alumni is they have a strong love of the school and community. They tell us about past events and are willing to help,” she said.

“I approached Cheryl earlier and said I would pay for the supplies if they (student council) would do the work,” Runion said. “I challenged them to do it.”

Runion and his company, Desert Sun Realty, donated the necessary supplies, with assistance from Roger Tobler and Home Hardware &Variety and Urban Jungle, which brought water to the site.

“The kids did a great job,” said Runion, who was accompanied by his son, Grant, who graduates today.