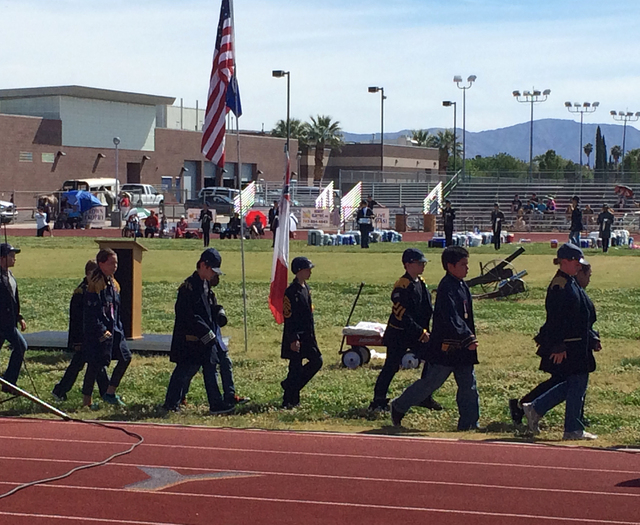 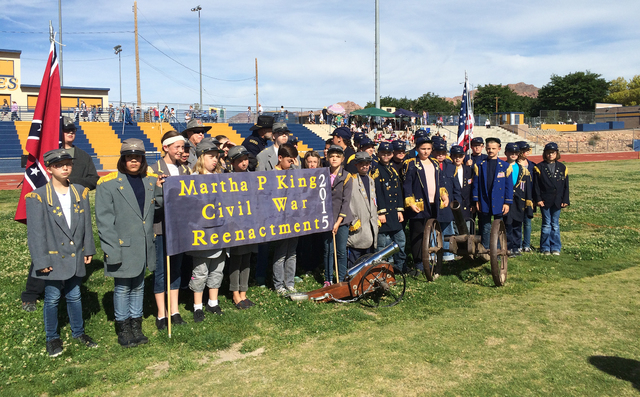 In ill-fitting blue and gray uniforms, the soldiers faced their mortal enemies. The soaring temperatures were surpassed only by the heat of the battles on the field. Some survived, others did not.

But unlike the original battles more than 150 years ago, all of the slain soldiers came back to life.

From the first shot at Fort Sumter to the surrender at Appomattox Court House, the entire Civil War played out on the football field at Boulder City High School. There, Union and Confederate forces hurled rounds of water balloons at each other — about 14,000 in all — as they fought the battles of Bull Run, Vicksburg and Gettysburg.

In the end, the Union forces were once again victorious, and President Abraham Lincoln was assassinated. The fifth-grade students weren’t there to rewrite history; they were there to learn about it.

“We are not here to glorify war but to re-enact it and understand the cost of freedom so it doesn’t happen again,” Coe told those assembled to watch the battles.

Before each battle or historic event, a student read a short essay offering key information while fellow students in the stands took notes for future classroom lessons.

In addition to four major battles, the students also engaged in a little naval warfare, bobbing up and down as they pretended to be aboard either the Monitor or Merrimac in the battle of the ironclads.

They also listened to Lincoln as he gave his Gettysburg Address, watched his assassination and attended his funeral.

The morning re-enactment included participation from King’s fourth-graders, who dressed as Nevadans to mark the state’s admission to the Union, its role in the Civil War and sing “Home Means Nevada.”

According to Tobler, the annual event started as an idea from the students in his fifth-grade class 31 years ago.

As a way to engage the students during lessons about the Revolutionary War, they re-enacted a few battles. The lesson was so successful that when they asked about doing another battle — this time with water balloons — when they studied the Civil War, Tobler said he couldn’t refuse them.

The following year, Coe, a fellow fifth-grade teacher at the school, asked to join in, portraying the spectators who watched the first real battle at Bull Run near Washington, D.C. Just as the spectators had done more than 150 years ago, they brought picnics, Tobler said.

When it came time for the lesson on the Civil War the next year, the teachers were told they couldn’t hold the re-enactment unless the entire school was allowed to participate.

“It turned out to be a real fun thing,” he said.

Tobler, who retired from teaching 18 years ago, also started the Great American Award program, which is now taught to fifth-graders nationwide. He said he thought the historical re-enactment might be discontinued when both he and Coe retired (Coe retired about five years ago), but the teachers at King have embraced the tradition.

“I knew the kids liked it, and it was important to show what freedom really means,” Tobler said.

More than just a one-day event, the annual re-enactment culminates an eight-week lesson about the Civil War.

King Principal Tony Gelsone said the students learn more about the Civil War by participating in the event than they would just by reading about it because they are so engaged.

For the re-enactment, each of the four classes at King Elementary were divided into Union and Confederate troops. They practiced drills and, just like real soldiers, were given medals (special pins with colored beads) to mark their accomplishments.

“The parents are so supportive of it,” Tobler said, adding that “kindergartners can’t wait till they are older and get to throw water balloons.”

Participating in the re-enactment has become a family tradition for many, Coe said, noting that uniforms are passed down through the generations.

“Students I taught now have kids or grandkids of their own,” he said.

“I learned a lot, and it was fun,” said Zoey Robinson, who portrayed a Confederate soldier in the battle.

Through the many skirmishes, she only “died” once, in the final battle at Gettysburg, Pickett’s Charge, when all the Confederates were killed.

In all, Zoey said she lobbed about 50 water balloons at her enemies.

She said learning about the assassination of President Lincoln, especially how they captured and killed John Wilkes Booth after finding him in a barn and burning it down, was the lesson she enjoyed and remembered the most.