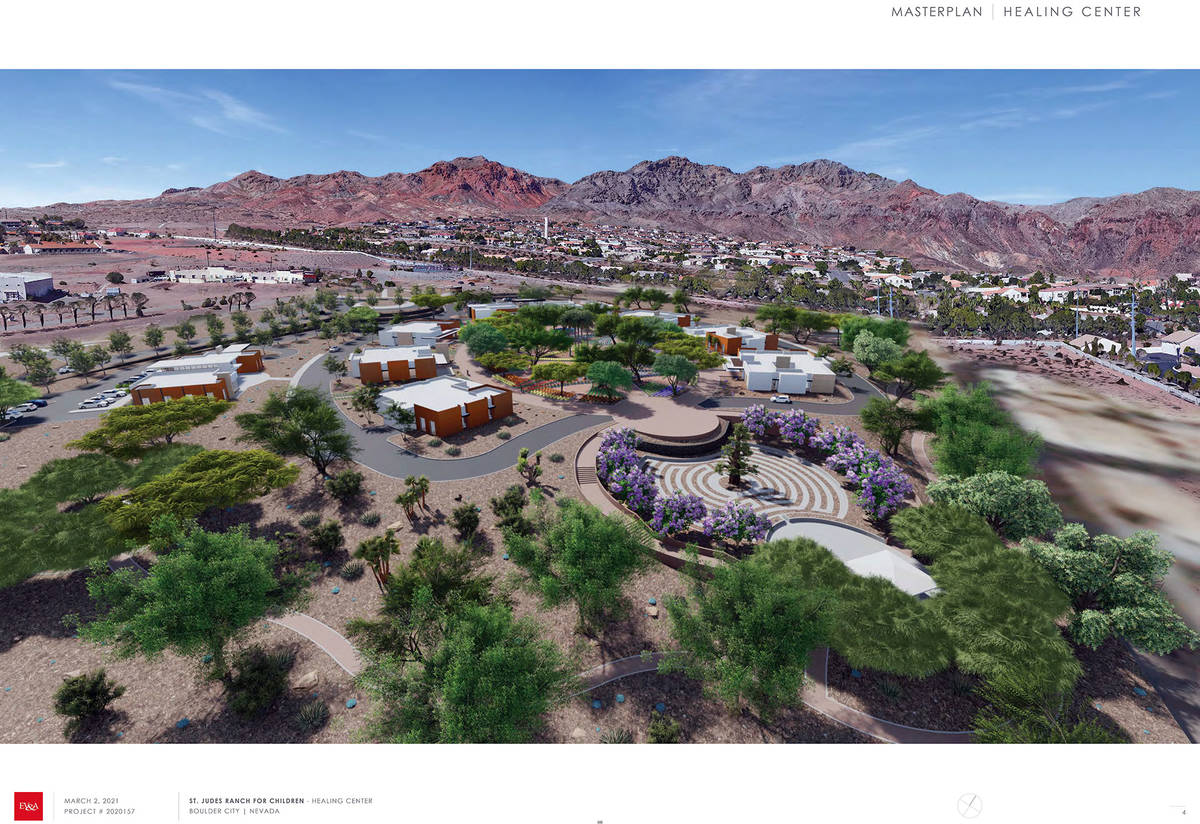 Boulder City Officials with St. Jude's Ranch for Children in Boulder City hope to break ground on its proposed healing center for victims of sex trafficking this year.

The proposed center encompasses 10 undeveloped acres of the ranch’s 38.65-acre property, according to a staff report given at the City Council’s June 8 meeting. It will be at the northeast corner of the campus and will have a maximum of 63 residents at one time. It will be separated from the rest of the campus by fencing and will serve different children than the other part of the ranch.

The new master plan amendment allows for changes with the layout of the healing center.

St. Jude’s CEO Christina Vela said they were still planning on nine one-story buildings, but some of them have been moved closer to the northwest and northeast boundaries of the property. The roads also have been moved to surround the buildings within the healing center. Vela said the changes were to increase functionality.

Throughout the planning for this project, residents of an adjacent subdivision on Blue Lake Drive expressed concern about how close the proposed facility would be to some of their homes. The part of St. Jude’s campus where the healing center will be is only separated from the subdivision by a wall.

Resident Robert Jarrard said he and other residents had been working with Ed Vance, the architect for the project, and Vela about how to handle their concerns.

He said they were hoping the view from the existing homes to the new project could be enhanced and that a level of privacy could be created for them by repairing the wall between the subdivision and St. Jude’s, planting trees that match the ones near their homes between the road and the wall, and enhance the landscape palette so that the elevation is softened.

“Quite honestly, I was not aware of the (level of) need of repair of that wall … we’ve continued to state to our neighbors that we intend to be a good neighbor, and we will fix the wall because it is the right thing to do,” said Vela.

Vela said those repairs would happen as soon as possible. She also said they were going to plant the requested trees.

Vance said he had been working with Jarrard and they had come up with a landscape plan to install trees that would address the third concern.

“I think we have a solution now that meets everyone’s needs … we’re committed to meeting the requirements of our neighbors and our constituents,” said Vance.

Vela said they are still fundraising for the project, but they have enough to start the permit process.

“I am grateful to St. Jude’s Ranch for Children for making the commitment to raise enough money to build a facility which will keep children who have been trafficked safe from child sexual predators while providing services to help the children recover from their traumatic experiences,” Shearing said in a press release. “One of the saddest times in juvenile court was seeing the young victims of sex trafficking when we had only limited resources to keep them safe and help them heal. My experiences have taught me that this a severely unfulfilled need and too large for any one purse to meet.”

St. Jude’s needs to raise $15 million for the project. For more information about the finances of the proposed healing center, go to https://stjudesranch.org/.