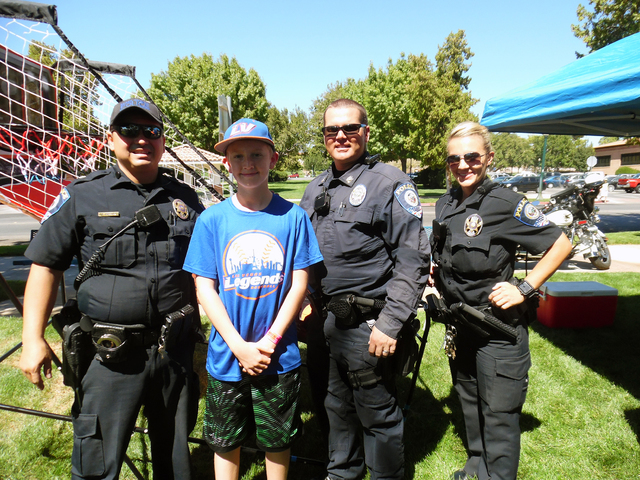 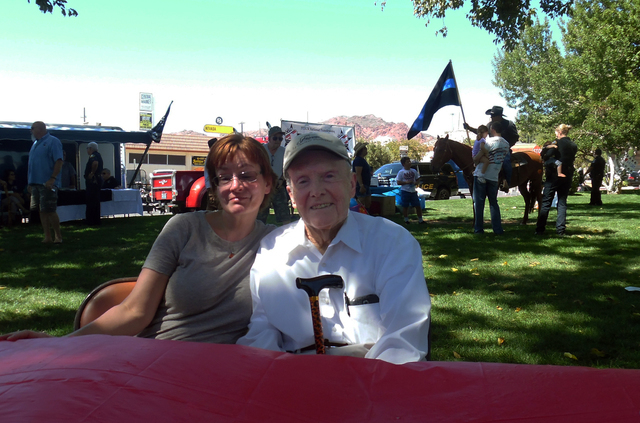 Hunter Terry/Boulder City Review Sherri May and her "adopted father" Ed Waymire agreed that, with all they do to keep us safe, it was important to attend the Hero and First Responder Appreciation Day on Saturday and show their support to members of the police and fire department. 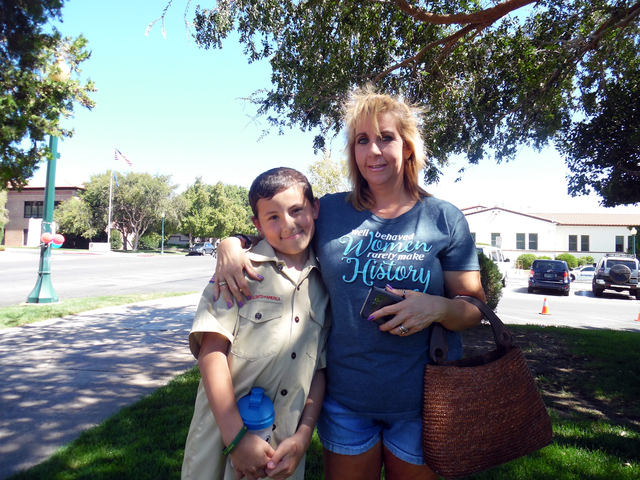 Hunter Terry/Boulder City Review Ethan Short and his mother, Suzi Rivera, moved to Boulder City a year ago from Henderson. Ethan, the son of a volunteer firefighter, said it was important to attend the Hero and First Responder Appreciation Day on Saturday to show the police and firefighters that we support them because they protect us. 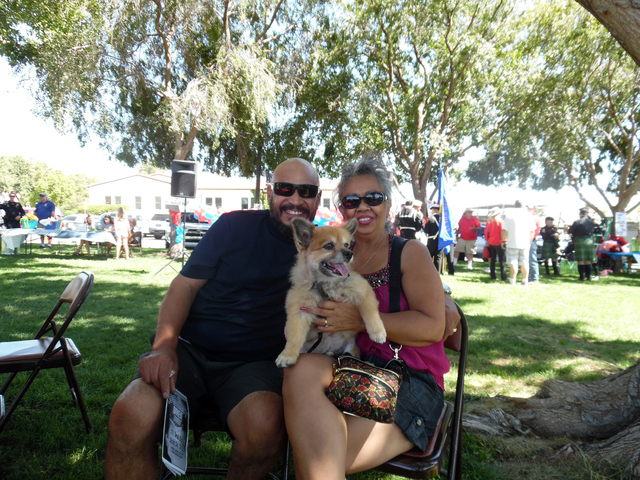 Hunter Terry/Boulder City Review James Majari and his wife, Katie Majari, were visiting from California on the way to visit Hoover Dam with their dog Buddy on Saturday when they saw banners for the innaugural Hero and First Responders Appreciation Day and decided they had to stop by. 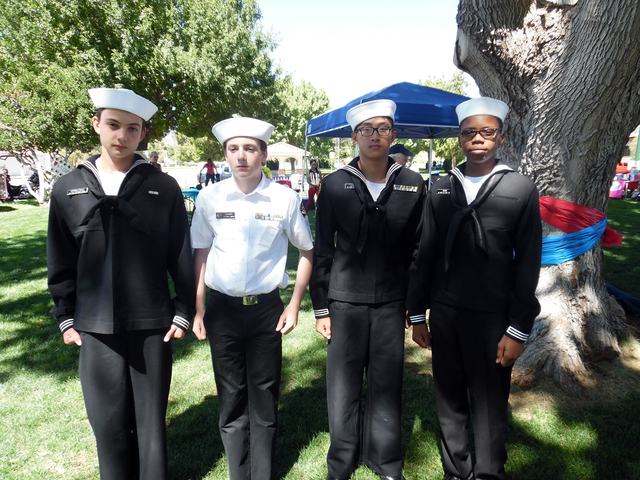 Hunter Terry/Boulder City Review Andrie Iorgulescu, from left, Eddy Kadian, Simon Lin and Keysean Winn are members of the Sea Cadets, a pre-Navy youth organization, and they attended the Hero and First Responder Day to participate in the ceremonial parade with the multiagency honor guard. 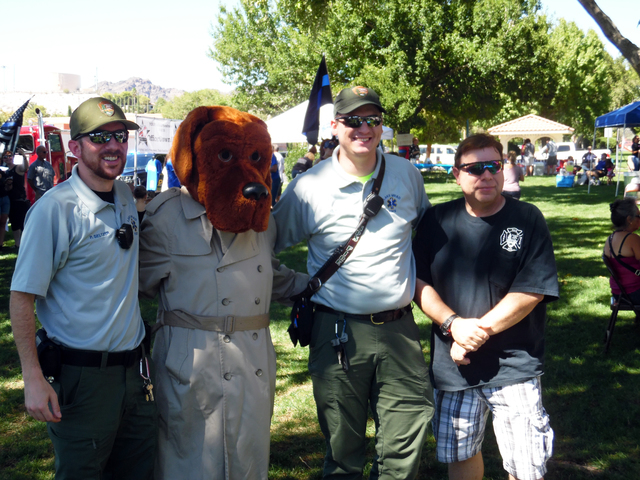 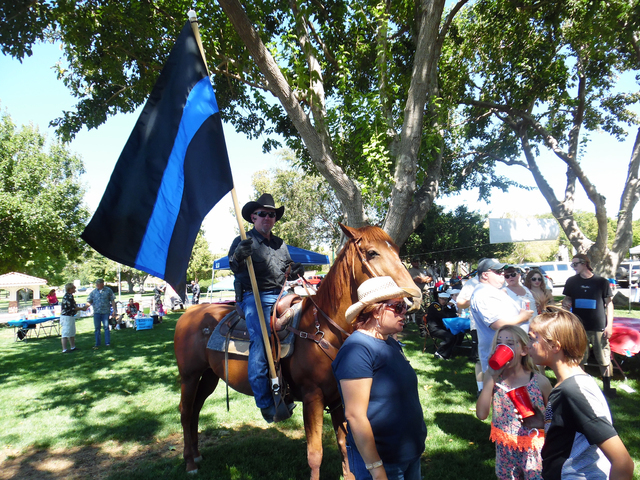 Hunter Terry/Boulder City Review Rafael Sarabia, riding his chestnut mare Red Sonia, is a big fan of law enforcement and said he was thrilled to be invited to carry the Thin Blue Line flag in their honor at the Hero and First Responder Appreciation Day. 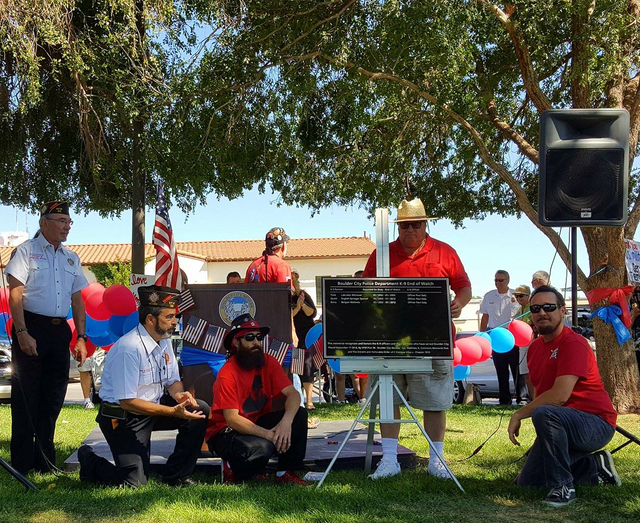 Courtesy photo Veterans of Foreign Wars, Matthew A. Commons Memorial Post 36, and the Ancient and Honorable order of E. Clampus Vitus, Chapter 1919, dedicated a plaque to Boulder City Police officer Paul Daly and the K-9 units who served during the first Hero and First Responder Appreciation Day on Saturday. The plaque reads: "This memorial recognizes and honors the K-9 officers and their partners who have served Boulder City." 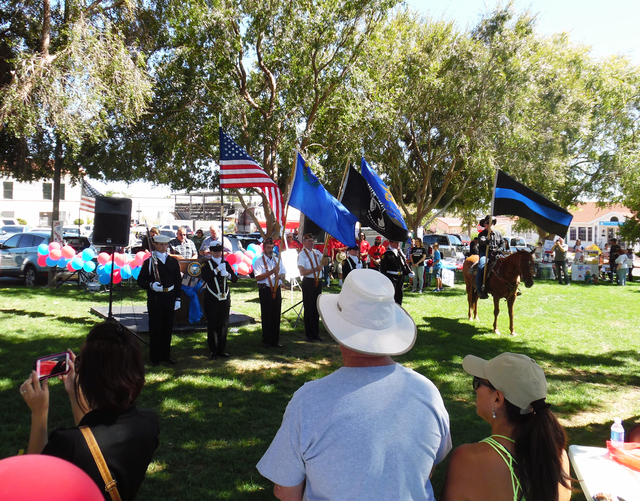 Hunter Terry/Boulder City Review Community members from Boulder City and all over Southern Nevada were in Boulder City on Saturday to thank and mingle with members of police and fire departments, as well as other public safety officers, at the inaugural Hero and First Responder Appreciation Day.

Residents from Boulder City and around Southern Nevada came together Saturday in Escalante Park to show their thanks to public safety officers at the inaugural Hero and First Responder Appreciation Day.

Boulder City has a reputation as a close-knit community with ties to military families, and attendees at Saturday’s event were grateful for the opportunity to show that same kind of support to men and women of the police and fire departments, as well as other public safety officers, including park rangers and emergency medical services.

“They are out there putting their lives on the line to protect us,” said Boulder City resident Sherri May. “It’s important that we take this opportunity to come out and show them they have our support.”

There were booths representing a number of organizations dedicated to educating the community and serving the men and women in blue. Some local organizations offered treats, and Fox Smokehouse BBQ provided fresh smoked meats for everyone, giving them away free to anyone with a badge.

Over the past few years, especially since the shooting of Michael Brown by a police officer in Ferguson, Missouri, in August 2014, there has been what many who attended Saturday’s event perceive as consistent negative coverage of the police.

Although attendees were excited about the event, there was a consensus among many that the men and women in blue were receiving a bad reputation and that citizens should show their support.

“Everybody is willing to criticize, but not many are willing to help,” said Andrew Truelson, executive officer of the U.S. Navy Sea Cadets Corps, which was in attendance and participated in the ceremonial procession. “These guys step up without even thinking about it and put their lives on the line.”

Though many in attendance shared that sentiment, some pointed out that in Boulder City there is a different atmosphere.

“The news is full of bad things about people in blue, that’s why this event is so great,” said J.C. Clift, a Boulder City fire fighter and paramedic. “But our community is amazing. In Boulder City, people are always strong in their support.”