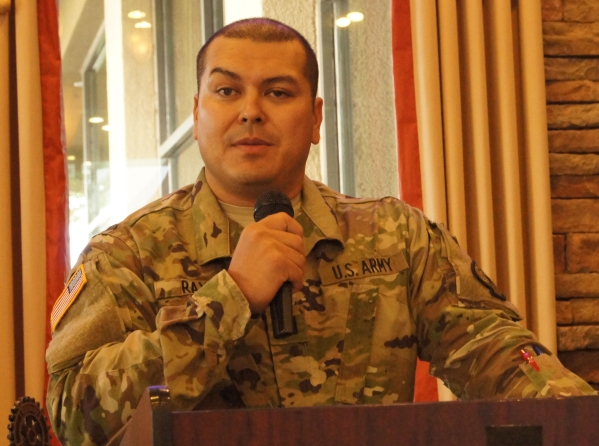 When Army veteran Fritz McDonald joined the Boulder City Sunrise Rotary Club, he knew exactly what his first act of philanthropy would entail. With the help of the Rotary Club of Boulder City, it’s coming to fruition.

The two clubs, in cooperation with one another, have donated $10,000 to the 137th Military Police Detachment out of the Nevada Army National Guard.

The reason for the donation, as McDonald states, is to help the 40-plus member unit travel home for the holidays during training before the soldiers head off to war.

The troops of the 137th were called, and will be stationed in Texas for training in the days after Thanksgiving.

According to McDonald, two days before Christmas the soldiers are told that they need to leave the camp, but that the Army cannot pay for them to leave.

“The Army doesn’t pay for you to go home on Christmas exodus,” McDonald said. “They’ll give you a pass, which means you don’t have to stay there, in the barracks, on a bunk-bed, eating a peanut butter and jelly.”

There’s a reason for McDonald’s passion with the mission the two Rotary Clubs have put together.

Born and raised in Boulder City, McDonald left and spent 10 years in the military. His last stop during his career was as unit commander for the 137th. Two months after McDonald left, his old unit was ordered to deploy.

After coming back to Boulder City and joining the Sunrise Rotary club, McDonald approached the board with this idea, and it was unanimously passed by the two clubs.

The $10,000 donation to the unit was made Oct. 8. The money will go directly toward plane tickets so that each member of the unit can spend the holidays with family.

But that’s not all both clubs will do, as McDonald says the goal wasn’t just to help for such a short period of time.

“We didn’t want to make a donation that may have helped them out one time, nor did we want to do something we would have to be on the hook for, for the rest of time,” said McDonald. “So we decided on a happy medium, and that was to adopt the 137th Military Police.”

According to McDonald, by year’s end, the unit will be in Afghanistan, so the two clubs will be sending care packages and also will be pen pals with members of the unit.

Additionally, the two clubs want to support the families and spouses of each member while the military police are overseas. Spouses and families will be helped with anything needed from “mowing the lawn to paying their NV Energy bill,” McDonald said.

To do that, the two committees have rolled out a fundraising campaign called Boots for Troops, which will run the month of November.

Through Boots for Troops, area residents can make donations for the unit at local stores and establishments.

“It feels good,” said Barbara Agostini. a member of the Rotary Club of Boulder City whose father spent six years in the Marine Corps. “I hope it will bring our community even closer together. It’s always good to give back to those who give for us.”

The two clubs would like to make these campaigns happen twice a year, with one running in November, around Veterans Day, and the other in May, around Memorial Day.

“The response has been overwhelming,” McDonald said. “I was so excited to hand these guys that check and say ‘This is one less thing you have to worry about.’ For the town, for the clubs, this is what we’re here for. This is what we do as a community. It’s been very rewarding.”