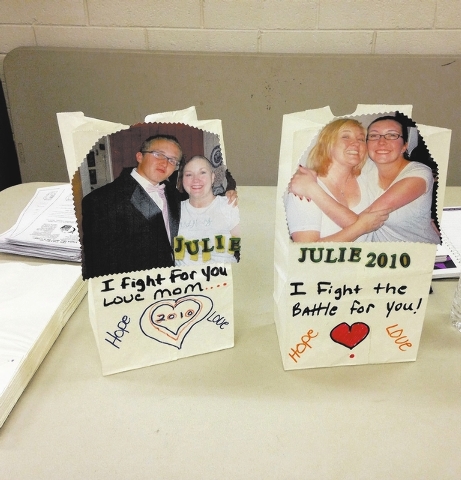 The organizers behind the American Cancer Society’s local Relay for Life fundraiser met Friday evening for a kickoff party.

The small gathering at Broadbent Park’s multiuse building was held “to bring all of our teams together to get the relay season started and get everyone excited about fundraising and why we’re fundraising,” said Shannon Moore, one of the event’s organizers.

Relay for Life is a worldwide community fundraising effort, where teams raise money through various means such as bake sales and car washes.

“Each team decides what kind of fundraiser they want to do,” Moore said.

Then, the night of the event, the teams show their support for the fight against cancer by walking around a track for hours. The goal is to have at least one team member on the track for the entire 12-hour event. A special survivors’ lap finds only cancer survivors walking, while being cheered on by the other participants.

“The whole point of it is to raise funds for the fight against cancer,” Moore said.

Funds are donated to the society to support its various research and programs. Last year, Boulder City teams raised nearly $40,000.

Teams will camp out on the field, which will feature live entertainment and activities all night.

This year’s event also will be movie themed, named “Lights, Cameras, Relay!” with awards given for the best campsite, Moore said.

“For a lot of teams, you have one cancer survivor and all the people who rally behind them,” Moore said.

The kickoff event also raised funds by selling luminaria bags, which will be decorated and placed around the track for a special ceremony during the event.

As of Friday, Moore said, there were 12 teams signed up. Last year there were 26.