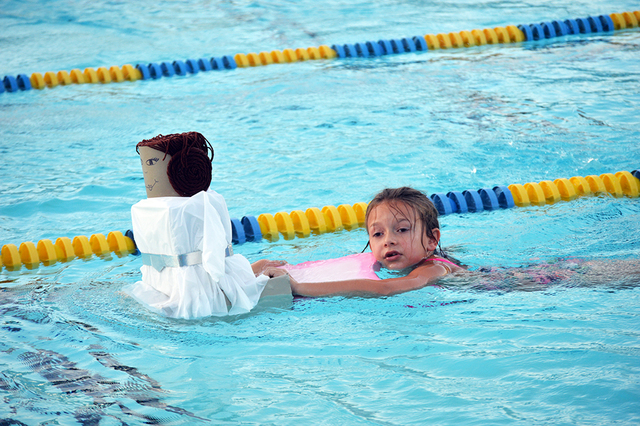 The force was strong with the participants at the 16th annual Cardboard Boat Race presented by the Boulder City Parks and Recreation Department on July 20. Kids of all ages packed the Boulder City Pool for an evening of Star Wars-themed boating.

Over 20 children made boats representing their favorite Star Wars vehicle or character. Mayor Rod Woodbury helped judge the boat contest and happily talked to the children about their creations. Parks and Recreation Commission Chairperson Carol Lelles also judged the event.

Cash Arioste, 5 and his brother Colton, 4, are fans of the dark side and made black boats with silver racing stripes in the shape of Star Wars two most infamous villains: Darth Vader and Kylo Ren.

Colton said he and his brother made the boat with his mom.

My mom helped me paint my boat and I put the racing stripes on myself because I liked them.

Colton and Cashs boats made it through the race without sinking and they were nothing but smiles at the end of the race.

Avery Huysentruyt, 12, is a veteran of the cardboard boat race and was excited to put her boat-building and driving skills to the test for the fifth year in a row.

I really like building a boat, Avery said. I have done the boat race a lot now and I think I have a better boat this year because I got to think about last year and what I did wrong and how much cardboard I should use. It is really cool.

This year Avery created a boat in the shape of the robot R2D2, which was a huge success with the judges. She won second place for best Rebel boat.

Everyone always looks forward to the boat race, but the Stars Wars theme brought out some really cool boats this year, Andersen said. We have a lot of Rebel and Imperial fighters here tonight and I think the kids are really enjoying it.

I made an Imperial boat because my sister was being a Rebel so I thought I would do something different and both our boats did great.

Mekenzie said it was really cool to win an award for her boat.

I like winning awards because you dont get them very often.

Win or lose kids were smiling as they pushed and paddled their boats through the water hoping they didnt sink. Many of the boats made it across the pool and others made it across in pieces.

Taylor Reeves, 5, had no problem getting her boat across the pool as she floated it to victory.

Taylor said she had a lot of fun racing and that she always knew she would win.

At the end of the night Andersen said he would have a lot of trouble finding a theme that could beat Star Wars for next years event.

It is going to be tough finding a theme as good as this one, Andersen said. We will have to wait and see what we can figure out.

No matter what the theme is, a lot of the kids will be excited to race their boats next year.