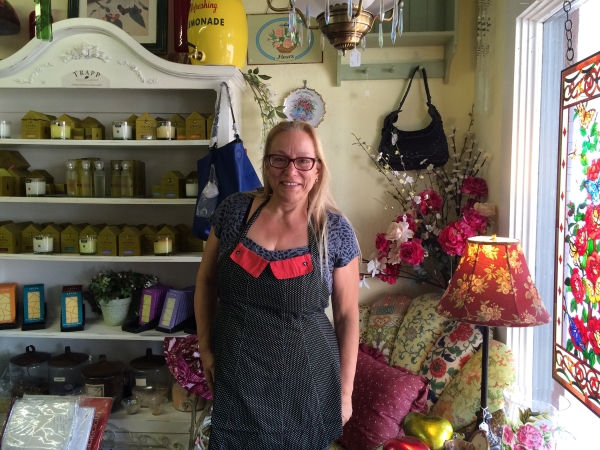 Karen Pellouchoud walked into Periwinkle Cottage in 2002, a year after she and her husband had moved to Boulder City, and fell head over heels in love with the home decor store. Not only did she become infatuated with what the store was at the time, but what she could potentially turn the store into.

The “For Sale” sign in the window at the time, put up by owner Jody Kincaid, attracted Pellouchoud more than the actual items in the store did.

Before she could even deliberate with her husband Dan, Pellouchoud marched straight to Desert Realty and told the staff, “I want to buy it.”

Dan, who had been working on the Salt River Project was assigned to a spot at Hoover Dam from 2001-2011 as part of a federal program designed to impart fresh ideas into government organizations, so the Pellouchouds were looking to settle down and make a life in Boulder City.

“There’s several reasons I’m leaving, not just one. It’s a mixture of the right timing and the building being up for sale,” explains Pellouchoud with a heavy heart.

Periwinkle Cottage was originally a women’s boutique before Pellouchoud took if off of Kincaid’s hands in the early 2000s. After Pellouchoud purchased it, she began to make it more diverse, incorporating things for men and children, making it a gift store for everyone.

According to Pellouchoud, she was searching for something to set them apart, and catch Boulder City’s eye. So one day her friend Cindy Bezard came to Periwinkle Cottage after work and proposed an idea to her.

“I had an experience with the Red Hat Society one day, and I went over to Periwinkle after work and told Karen, ‘You know, if they can have a club and wear red hats, why can’t we have a club where we bring our purses,’ ” explains Bezard.

Just like that, the Mary Frances Purse Club was born.

Every week the ladies would meet, have lunch and bring their purses. The goal was to encourage shopping downtown and keep Periwinkle Cottage’s customers in the heart of Boulder City. It was a gesture that not only represented what the club was about, but what the owner of Periwinkle Cottage was about.

Eventually, Mary Frances herself came to Periwinkle Cottage and signed all the ladies’ purses and even helped create a purse that Pellouchoud sold to customers in the store.

“Karen has significantly added to the strength of the small business in Boulder City,” said Bezard of her friend of 14 years. “She also contributed to the community. She always had something to contribute, whether it was a gift basket or her time.”

According to Pellouchoud, the construction of Interstate 11 makes her a little nervous. She does not know what kind of traffic will be coming in and out of Boulder City and how that will affect small businesses.

She holds out hope that one day she will be able to open another Periwinkle Cottage somewhere in Boulder City, where she and her husband plan to retire. For now she is going to have to settle with spending time with her 2-year-old grandson and three daughters, who all just recently started their freshman year of college.

“The people I’ve met are the best part of owning this store. They’re still my friends today,” Pellouchoud said. “I used to think I needed to put a couch here because it was a place a lot of women felt they could come talk to me about anything.”