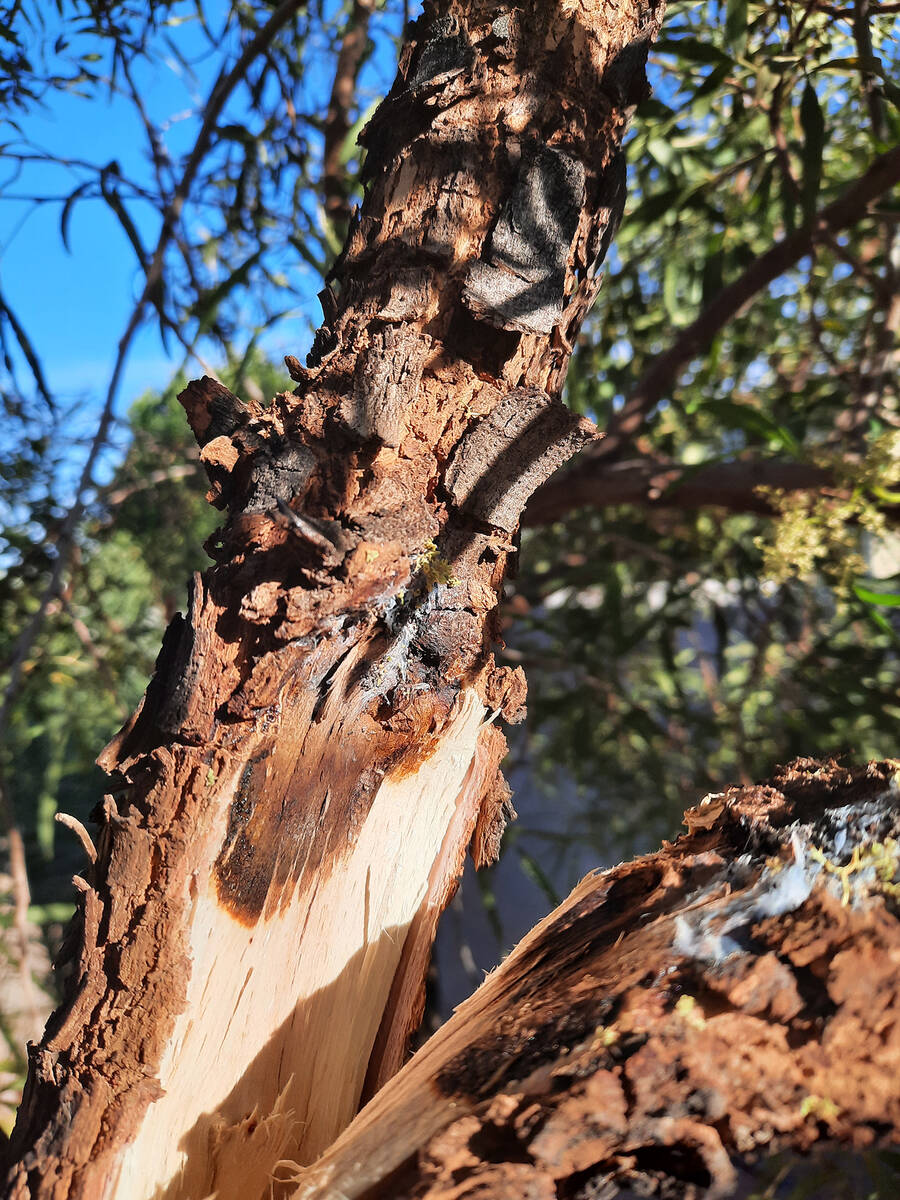 (Bob Morris) The internal rot of dead wood can be seen on thie African sumac. 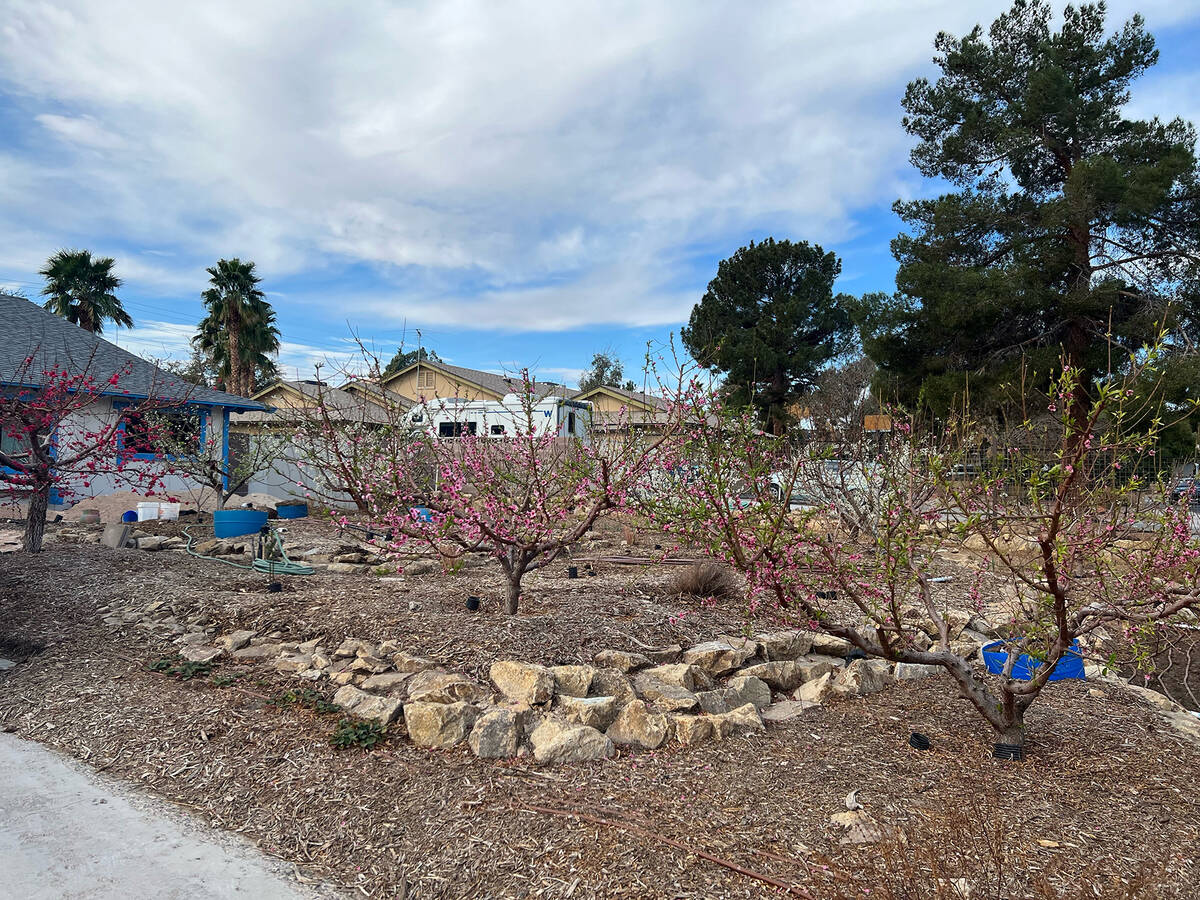 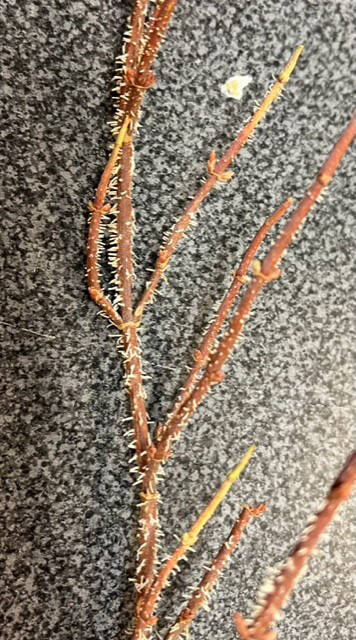 (Bob Morris) The branches of this ephedra or Mormon tea plant have died due to drought.

A. California pepper tree is a better selection than Brazilian pepper. But they are both evergreen and can pose a problem near water that you want to keep clean. Evergreen plants drop leaves all season long but drop their leaves heaviest soon after times of new growth. A deciduous tree that drops its leaves for the winter months is a better choice near pools because you clean the pool only once.

Make sure it’s not dropping leaves because of a lack of water. Increase the amount of water and the frequency of application to make sure it’s not dropping its leaves because the soil is too dry. Check to make sure enough water is applied each time to penetrate the soil 18-24 inches deep. Make sure that water is applied to at least half the area under the tree’s canopy. Water again when the soil at 8-10 inches deep is about half full of water or starting to dry out. To reduce soil evaporation and weed growth, apply a surface mulch of rock or wood chips to a depth of 2-3 inches.

Also remember to apply water on, or just before, windy days. Use a weather app on your phone to judge when it will be windy in the future.

You’re right that lowering the tree’s height decreases the amount of leaves and stems you must clean up, but evergreen trees are still going to drop leaves at inconvenient times of the year. If you decide to lower the tree’s height rather than replace the tree, then pay the extra expense to have it done correctly by a licensed arborist. Not all licensed arborists are good at pruning trees. See some examples of their work before you employ them.

Q. My African sumac tree has a fungus in it. I am thinking of cutting off the whole main branch because of the disease but it’s a guide branch and I hate to do that. Can I just cut off the branch that broke? Any info you have would be greatly appreciated.

A. The disease won’t spread to healthy parts of the plant. The rot or disease spreads internally because it’s what we call “saprophytic” and only attacks dead or very weak wood. There is nothing you can do to stop it.

The center of the tree is composed of dead wood. The only living part of the tree is a thin ring just under the bark. This living part is strong enough to stop the spread of this saprophytic disease. The only thing you can do to help your tree is to make sure that whatever you use to cut or prune the wood is as clean and sharp as possible.

My guess is that this rot started at the top of a narrow crotch where two limbs come together. A narrow crotch makes the letter V when you look at it. Weak crotches can split in strong winds, particularly if the inside of the tree has been starting to rot. A strong crotch angle makes the letter “U” and is less likely to start rotting in that spot and then split apart in strong winds.

Prune it enough to shape the tree the way you want it. Just cut off the branch that broke very close to the next larger branch and let it heal and completely close it off in three or four years. It takes longer to heal if it’s not cut close to the trunk so there is no longer a stub remaining. If the tree looks healthy to you otherwise, then don’t worry about it. Cut off the limb close to the trunk with a clean blade.

Q. At our wildlife preserve near Midland, Texas, I found ephedra plants (Mormon tea) that look like they might be diseased. Other plants in the area look fine. We are currently in a severe drought condition, but most ephedra clumps are flowering. Have any ideas?

A. Native plants like “Mormon tea” or ephedra will die back when the soil gets dry for a long time. Dying back is normal but it can be confused with a disease, or it might be a disease causing it. Sometimes native plants succumb to diseases when they are weakened and don’t receive enough water. But don’t worry. They will spring back to life during the next rain.

Water in the soil is irregular in supply because of its distribution and the soil’s capability of storing water. For this reason, some plants receive more water than others just simply because of differences in soil texture (variability in soil, various amounts of sand, silt and clay). Because of genetics some plants are more susceptible to disease than others.

If your curiosity is bugging you, the way to find out about disease is to contact your state plant pathologist and send in a sample. This may not give you an answer you can apply but it may satisfy your curiosity. I’m guessing the state plant pathologist will confirm there is a disease present but it’s probably one of the less vigorous diseases like Cytospora spp. that affects weakened plants that are in the process of dying to the ground because of a lack of water.

Instead of sending it to the pathologist I would take a couple of gallons of water and pour between 1 and 2 quarts at the base of several of the “diseased” plants and watch what happens. Reaction by the plant might take two weeks in warm weather. You may see some new growth at the base of the plant in a week or two. Then again, you might not. It depends on what you want to learn. Is there a disease present? Or do you want to solve the potential disease problem?

Q. Did you see a reduced fruit set in plums, pluots and pluerries this year or was just mine? I have 3- to 5-year-old trees and this year I just did not see many flowers at all. Not so much lack of pollination, but a lack of flowers. I fertilize with compost and try to keep an eye on how much growth I get each year. I want “fruit production” not “wood production.”

A. I look at fruit production from now forward to judge how much thinning (or none) should be started in about one or two weeks. Fruit removed should be about the size of your thumbnail. Sometimes late freezing weather removes fruit for me. Right now, early flowering peaches have fruit about the size of a large pea. A reduced number of flowers, however, usually means poor pruning practices. It’s best to be observant.

Fruit production varies where you live in the valley and in different microclimates. Some places in the valley (and landscapes) are warmer than other places. At The Orchard at Ahern, we have about 70 varieties of fruit trees producing fruit from late May through December. Our 25-30 varieties of peaches finish producing fruit toward the end of July and into the early parts of August. There are varieties that produce peaches in September or October but for me it’s no longer peach season. September through December is apple or pear season.

The same holds true for apricots, apples, pears and plums but not citrus. Generally, early-flowering fruit trees produce the earliest crops of fruit. These early flowering varieties are also the varieties most likely not to produce fruit because of late spring freezes. If you want to be sure to get early production of fruit, live where it’s less likely to freeze.

About mid-March I observe the fruit remaining on earliest flowering varieties of peach, plum/pluot and apricot as indicators for this year’s harvest.