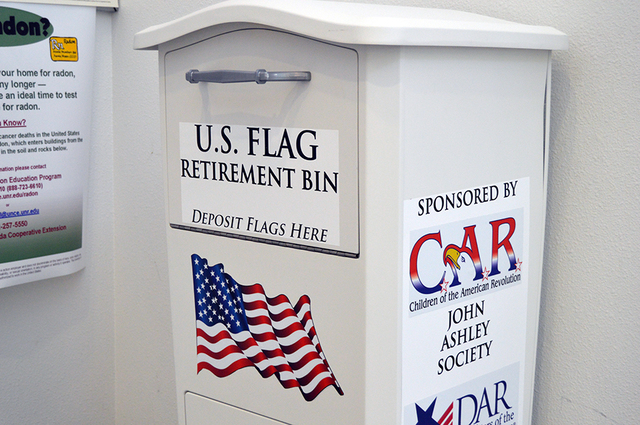 Old American flags have found a new place to retire their stars and stripes.

The Silver State Chapter, National Society of Daughters of the American Revolution, dedicated a flag retirement bin to Boulder City Library on Jan. 12.

The bin is at the entrance of the library and can be used by anyone looking to properly dispose of an old flag.

“Disposing of a flag is a form of patriotism,” NSDAR spokesperson Roberta Ohlinger said. “We put up the bin because we wanted people to remember they can get rid of their old flags in a respectful way.”

Ohlinger said that the library was the perfect spot to put a flag bin.

“We thought the library seemed like a good fit because it is such a good central nexus for the community.”

Library Director Kimberly Diehm said she saw the request for the bin right after her staff had found an old flag in the library.

“I found an old flag and gave it to our maintenance man and he had no idea what to do with it, and shortly after I got an email about the flag bin,” Diehm said.

The library has heard positive comments about the bin, according to Diehm.

“I haven’t personally seen anyone dispose of a flag, but I did hear about some people who were happy because now they know what to do with their old flags.”

Flags will be picked up on a regular basis, and then they will be properly burned.

For more information on the flag bin or Daughters of the American Revolution, contact Ohlinger at robertaohlinger@yahoo.com.