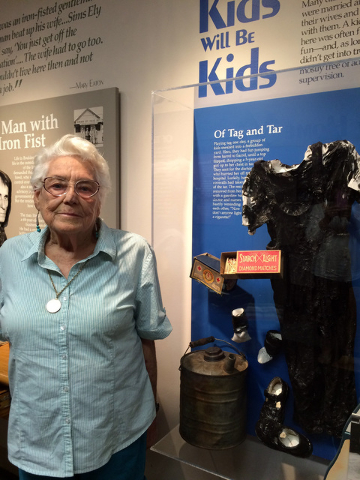 Standing just a bit taller than the tar-covered overalls in the exhibit Boulder City-Hoover Dam Museum, Joy Allen McFate stares at the display and smiles.

She knows how that child fell into the barrel and exactly how the gooey black substance felt as it sucked the child deeper and deeper.

“She’s the Tar Baby,” family members say in unison to the people looking at the exhibit.

Nearly 85 years later, McFate recalls that day as clearly as if it had happened yesterday.

Unlike many little girls, McFate was a tomboy and would happily play with her older brothers in the surrounding desert catching horned toads and lizards.

“We had tons of stuff to play with: rocks, sticks and sand,” she said.

One day she and two other kids were “just running around” when they decided to visit the corporation yard, which was filled with stacks of lumber, big boxes and 50-gallon drums of tar.

“We climbed on top of a car and over the fence. I saw the barrels of hard tar and jumped on it.”

Unfortunately for McFate, the desert sun softened the tar in one of the barrels and as soon as she jumped on it she said she could feel her toes begin to wiggle in the gooey stuff. The more she wiggled, the deeper she sunk.

She said she knew that if she went too deep, like being underwater, she would not be able to breathe. She saw a 2×4 nearby and had one of her friends put it across the top of the barrel and she was able to hold on and keep her head above the surface though she was up to her armpits in tar.

“I just hung there. I don’t know for how long,” she said.

She was saved by some government workers who arrived in a station wagon.

They tried unsuccessfully to pull her out and ended up spilling her and the contents of the barrel onto the ground. Still covered in tar, the men wrapped McFate in a tarp and brought her home.

McFate said her mother, who was not the fainting type, fell backward and was caught by a couple of her brothers when she opened the door and saw her daughter.

They sent someone running to get the doctor, as they didn’t have a car or telephone. When the doctor arrived with a small bottle of gasoline and a rag to remove the tar, he quickly realized they would need more help.

She said she was wrapped back in the tarp and taken to the hospital.

“My feet were just big blobs,” she said.

They were able to cut off the overalls, which protected much of her body, and use gasoline and scissors to remove the remaining tar from her body and hair.

“I was red and sore on my legs, hands and feet,” she said. “It was like I was sunburned.”

Once she was cleaned up, McFate said she was sent home.

But that wasn’t the last of her tar experience. For the next decade or so, everyone called her “Tar Baby,” reminding her of her misadventure.

Now living in Redding, California, McFate was in Boulder City on Tuesday and stopped by the museum to share memories with Shirl Naegle, the museum’s director and historian.

She is the youngest of J.V. Allen’s nine children. Her father was a friend of Frank Crowe and he followed him here from Jackson Hole, Wyoming, to help build the dam and city.

Her older brother, Marion Allen, also worked on the dam and wrote “Hoover Dam & Boulder City,” which provided an account of the construction project and formation of the city.

Joining McFate to reminisce about her early years in Boulder City was her niece, Reva Allen Richard, one of Marion Allen’s children.

“I was so jealous of her,” said Richard of her aunt’s ability to dress and play like a boy.

In addition to recalling McFate’s misadventure with the tar barrel, the two women talked about the early days of the city and how a group of dedicated workers followed Crowe from dam project to dam project,