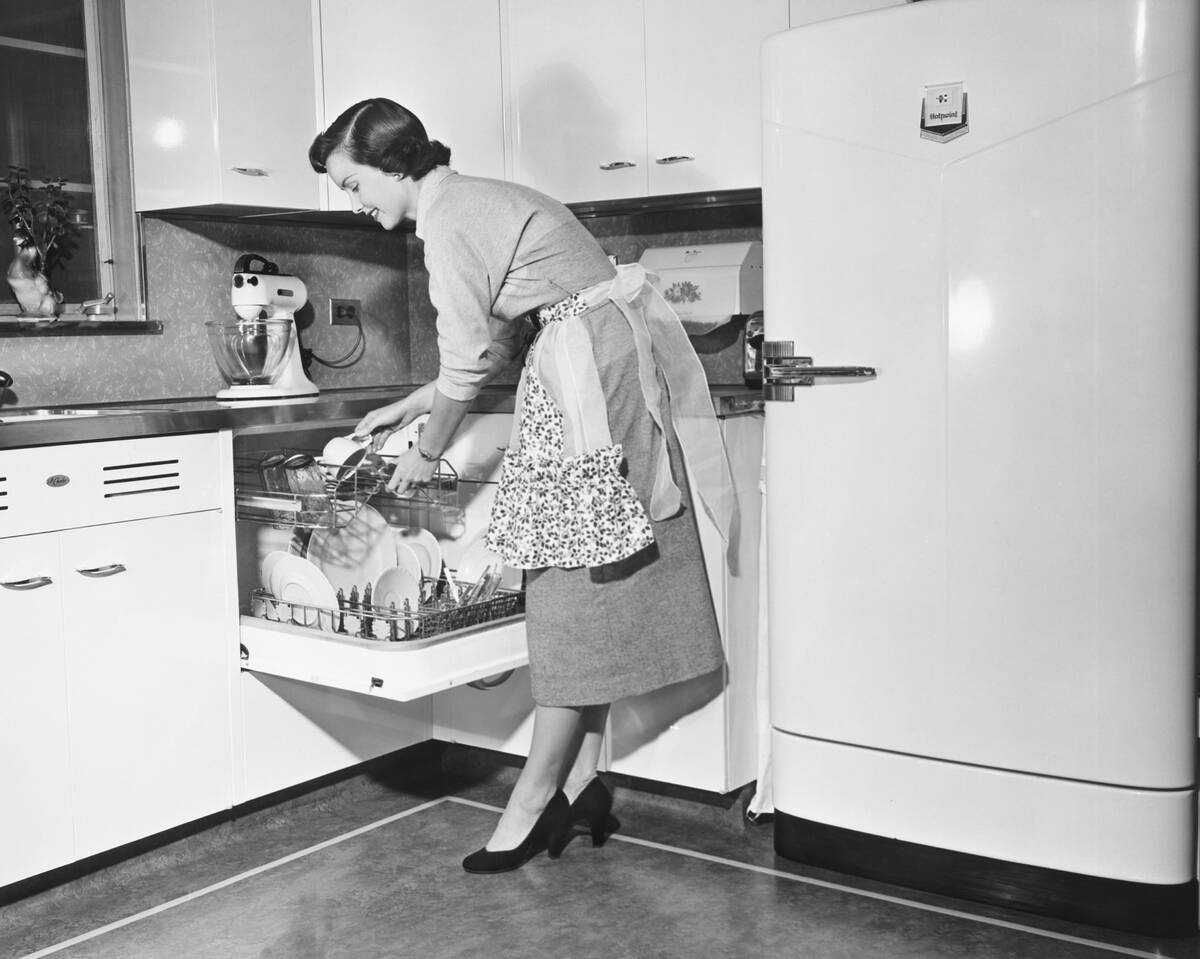 Think however of the housewife or single person in Nevada’s yesteryear that had no idea of a dishwasher, other than by hand. And while the dishwasher isn’t specific to Nevada history, it certainly played a part in the lives of the people of Nevada.

As the U.S. was going through the industrial age of the mid-1800s and beyond, historians note, “The first mechanical dishwashing device was registered for a patent in 1850 in the United States by Joel Houghton. This device was made of wood and was cranked by hand while water sprayed onto the dishes. The device was both slow and unreliable. Another patent was granted to L.A. Alexander in 1865 that was similar to Houghton’s, but featured a hand-cranked rack system. Neither device was practical or widely accepted.”

The earliest inventions that show any similarity to today’s dishwashers first appeared in the second half of the 19th century in the United States and were all hand powered. Still, they were the first devices known to spray dishes to the end of cleaning them, but unfortunately, the idea did not catch on.

Other historians have cited as an obstacle to dishwashing machines was the historical attitude that a woman’s value was the effort she put into housework rather than mechanical devices making household chores easier.

One of the most significant movements toward the modern day dishwashing machine came in the 1880s. Beginning in 1883, Josephine Cochrane of Shelbyville, Illinois, started working on a device to wash dishes using water pressure, instead of rotating brushes. Cochrane (a wealthy socialite widow) said the inspiration was her frustration at the damage occurring to her collection of antique fine china when her servants handled it during cleaning.

By 1886. Cochrane, with the help of railroad mechanic George Butters, had developed a hand-powered dishwasher that was introduced at the 1893 World’s Fair in Chicago and became quite popular, winning a top award.

The machine was tailor built to hold cups, saucers and plates and was a distinct success. And it was this success that spurred further developments.

It was learned quickly that hotels and restaurants would be a ready market for the dishwasher on a commercial scale. Further improvements in designs employed electric motors, front door loading, a wire rack to hold the dirty crockery and a rotating sprayer. Drying elements were added in the 1940s, and came around the time when permanent plumbing and running water in the home was becoming increasingly common.

Still however, dishwashers were used primarily in commercial businesses. It would be the post-World War II boom in the 1950s that saw dishwashers become more in domestic use, albeit mostly to the wealthy.

Eventually, by the 1970s, dishwashers, either built-in or portable, had become more widely used in the home by the general public in North America and Western Europe.

No doubt, also in the 1950s or earlier, commercial dishwashers began to be used in Nevada’s many casino restaurants and hotels.

Just imagine what the housewife in Nevada’s yesteryear would think of the many household conveniences you have that she did not.