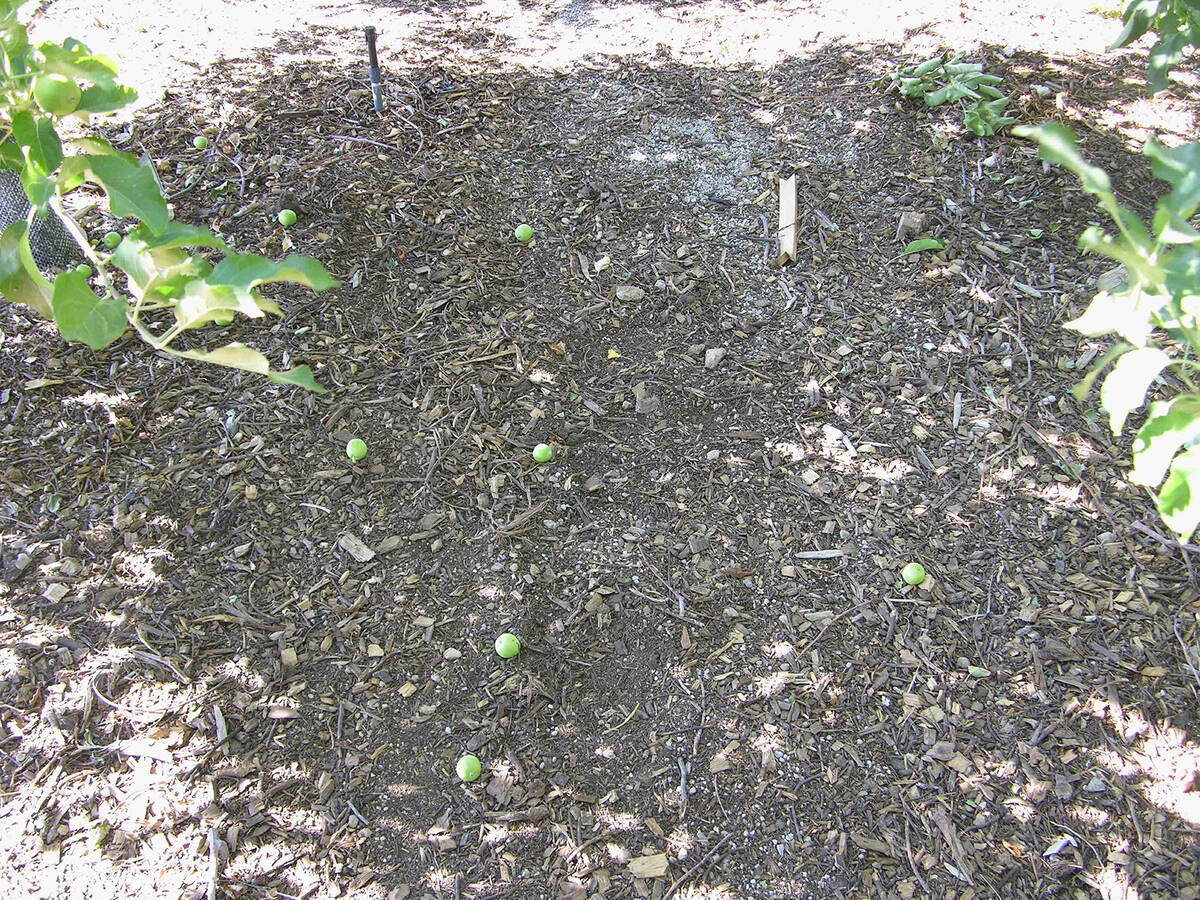 (Bob Morris) Look for light speckling on the ground to determine if enough of the top canopy of the fruit tree was removed. 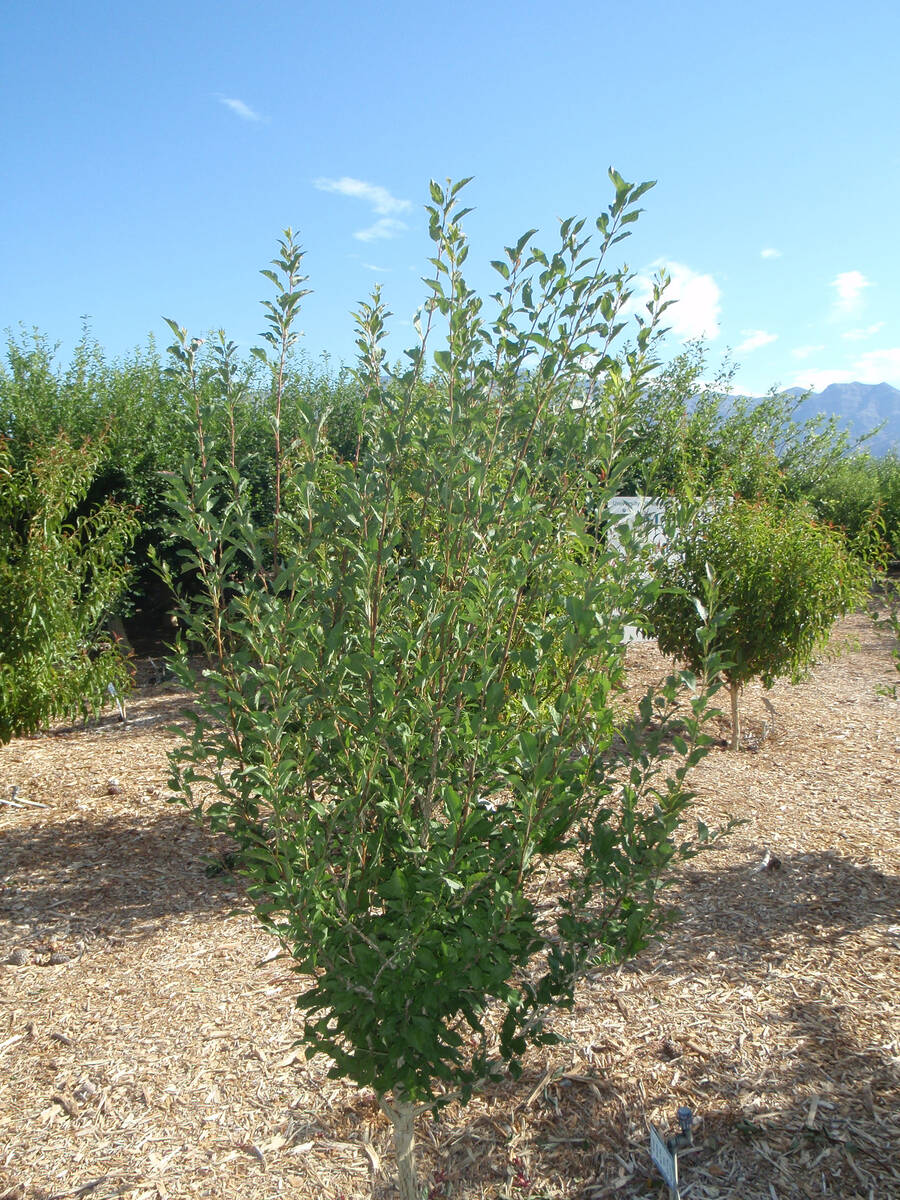 (Bob Morris) When a tree is young, it can be pruned or trained to fewer branches so those remaining can grow more. Additionally, removing some of the new growth allows more light to penetrate inside the tree for better fruit production. 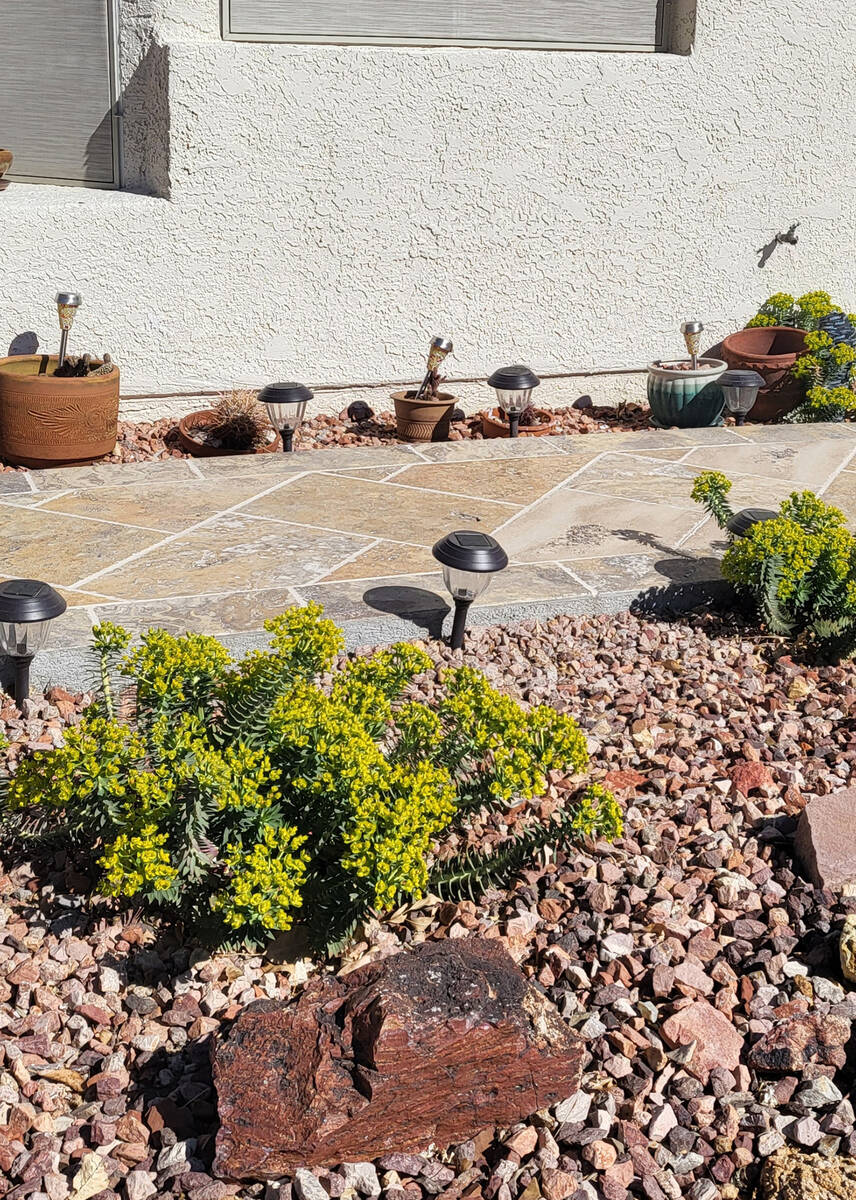 (Bob Morris) Euphorbia, or gopher plant, is a xeric succulent that is good for low water use landscapes and rock gardens. 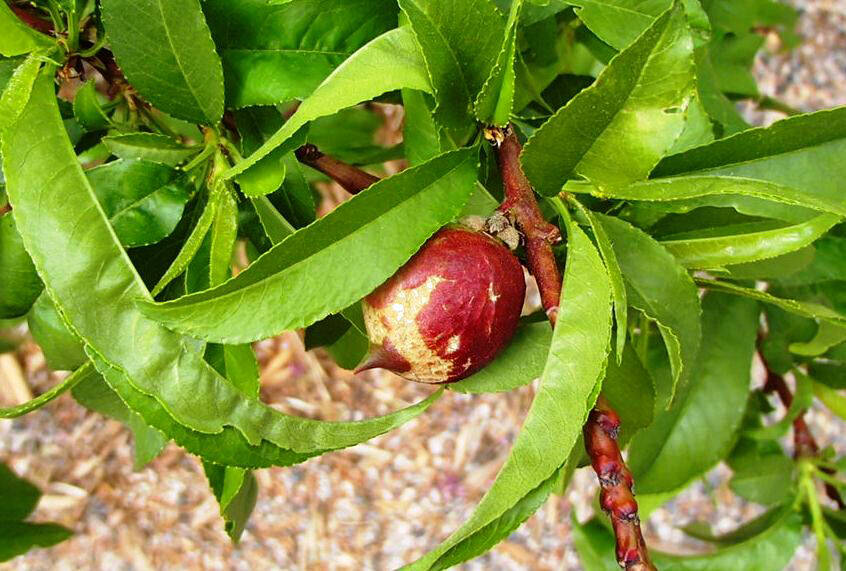 (Bob Morris) Scarring on nectarines as they develop is a sign of damage by flower thrips. Applications of spinosad spray can deter the thrips.

A. Major pruning cuts, requiring a saw or a lopper, should be done during the winter months when the leaves are gone. Minor pruning cuts requiring hand pruners are done anytime you see a problem. You can do them now if you want. Just not large limbs.

In the desert, don’t remove so much wood that lets our hot desert sun burn the limbs and trunk. Overheating of limbs and the trunk happen in about 20 minutes when there is no sun.

In the desert, I believe the less removed when pruning the better. If you must remove limbs, do it on the north side of a tree where the sun is less intense and production is lower anyway. Think of the tree leaves as solar collectors. Leaves need full sun as much as six to eight hours each day. This is the reason major limbs are arranged like three dimensional “spokes on a wheel” and pruned far enough apart to let light enter the canopy when it shines at lower angles.

The best place to look to see if there has been enough pruning done is the ground. The light speckling on the ground tells you if enough limbs and leaves have been removed. Stop removing leaves, stems and branches when the light from the speckling occupies about one-third.

Summer pruning removes new growth before it gets established. Summer pruning is the removal of new growth when ground speckling is threatened. The tree grows into areas where light is available. Tree growth is not the kind of production you want from the tree unless you’re a termite. During the production season the owner of a small tree is managing the light, insisting the tree produce fruit instead of growth.

The tree “invests” in its new growth or it can “invest” in its fruit production. When the tree fills in these “light” spaces, its “investment” is removed. But the leaves and green stems are rich in “food.” Rather than burn it, return this rich growth to the soil by dropping it in place and letting it compost.

In wintertime less pruning is needed because of summer pruning.

Q. I have roses growing in my yard and the flowers have a lot of damage to the petals this spring. Some of the flowers never fully open. What do you think is the problem?

A. This type of damage is most likely from flower thrips. Flower thrips are very small, poor flyers, and difficult to see. If you’re not careful in your observations, they can be totally missed. These insects are common in the spring when temperatures are cooler.

Spinosad sprays are effective on flower thrips, but they can be overused, which can cause insect tolerance to these sprays. To prevent this from happening, use either insect soap sprays, neem oil or dormant oils every other spray.

I noticed in your picture that rock was used as a surface mulch. Roses do not like rock. They like organic soils. If you use rock with roses, you must either rake back the rock and apply organics such as compost to the soil once a year or switch the surface mulch entirely to wood chips.

Q. I have a Santa Rosa apricot and Arctic Star nectarine. Are there any prophylactic applications of pesticides that I need to be doing?

A. The only truly prophylactic (preventive) sprays are the dormant oils that are applied during the winter on warm, windless days to help curtail soft-bodied insects like aphids. The rest of the time requires regular visits to your fruit trees and inspecting them for potential problems.

Apricots, depending on the variety, produce fruit in our climate from May through September. Early apricots, like the variety Santa Rosa, normally do not require any spraying. These trees may require some thinning, or fruit removal, in late March or April if the clustered fruit is bunched up in some areas. But often very little thinning or spraying is needed.

This may not be true of nectarines like Arctic Star. If the fruit has been heavily scarred in prior years, then the fruit needs to be protected from flower thrips. Spraying for flower thrips begins when the fruit is the size of a BB, soon after the petals fall from the flowers. The 10-day spray intervals need to include spinosad.

Q. I am hoping you can identify a tree that was quite prevalent in the ’60s in Las Vegas. We called it an umbrella tree. It gets small purple flowers which turn into seeds that look like garbanzo beans. Are they still available at local nurseries?

A. The tree you called umbrella tree is called the Texas umbrella tree, aka Chinaberry. It would grow quickly to 30 or 40 feet in irrigated landscapes, a bit smaller than mulberry with a more regular form, and deciduous in the winter. Some people didn’t like this tree because it was considered messy. I liked it because it was uniform, a smaller tree for the landscape and could get by on less water than mulberry.

This tree is not found locally very often so you may have to look for it online in early spring or fall.

Q. I only water my cacti with a hose and I found these weeds growing that the honeybees love. Do you know what they are?

A. It looks like you’ve got a euphorbia (one of the gopher plants) growing as a weed. It is a large group of plants and can range from a landscape plant to a weed.

All the euphorbia (poinsettia is one of them) produce a white, milky latex in their stems that can be irritating to some and highly toxic to others. Wear gloves, break a stem and check to see if I am right.

Euphorbia can be started easily from root pieces or from seed, so it’s not surprising you have one. One of the weeds that invaded open areas once watered again was a creeping (spotted) spurge: a euphorbia with a brown spot on its tiny leaves.

Their yellow flowers strongly attract bees, but they don’t start attracting bees with their flowers until they start growing in the spring. The kind you have should not need watering very often, but should grow about 2 feet tall and spread 3 or 4 feet wide.

Q. This caterpillar is on my Texas mountain laurel. Just two of them. What will they become?

A. May is the time for the Genista moth to be feeding on the young leaves of Texas mountain laurel. You might see a couple now but that might be the beginning of something bigger. If it were me, I would see if Texas mountain laurel is being used in other landscapes close by. If it is, I would control them. Otherwise if yours is just an isolated tree, then you might ignore it if there are just a couple.

The easiest way is to get rid of them is to hand-pick them and drop them in a bucket of soapy water. Or you can use a hand pruner and do the same thing. Sprays include Bt (dipel or thuricide or equivalent) or spinosad if you see a large population. If there are a number of plants in the neighborhood, I would chemically treat the tree with spinosad for long-term protection.

Q. Our queen palm seems to be distressed. A local nursery representative said this palm does not like our environment and suggested I apply a tonic to help the plant recover. Any suggestions?

A. The nursery representative is right. The queen palm does not like our dry wind and looks ratty primarily because of our high winds. There is some discussion about heat tolerance as well and to avoid planting them in western or southern exposures in full sun and surrounded by rock.

Palms are easier to water because they don’t require much more water as they get bigger like some other trees might. About 25-30 gallons at each watering is all that’s required. Queen palms prefer growing in organic soils so they will benefit from having compost added to the soil before planting.

As far as the plant tonics are concerned, that’s really a personal preference. Some people swear by them and other people think they are a waste of money. Anything that improves their growth improves their recovery.