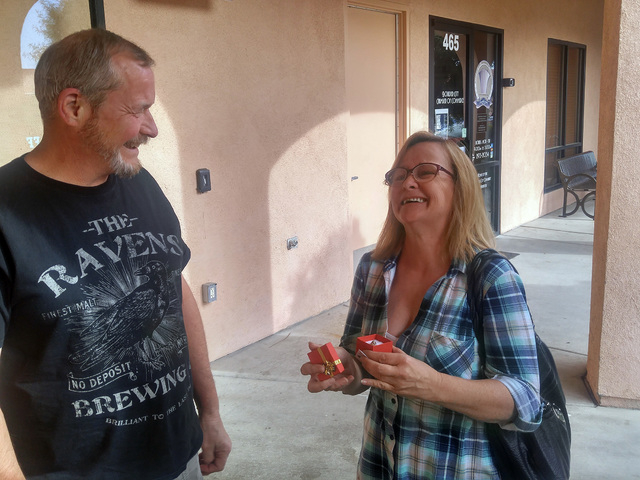 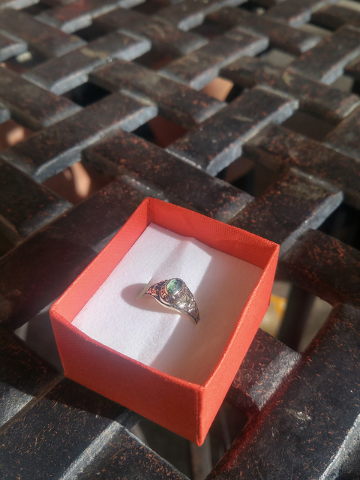 Treasure hunting might not always be lucrative, but Mike Ditto made a priceless discovery Friday in Broadbent Park when he found a dingy ring that had been missing for more than 30 years.

Ditto takes his Minelab metal detector whenever he and his wife, Cookie, travel the country, always looking for a chance to uncover lost treasure. His find last week was made extra special because for the first time he was able to reunite the item with its original owner.

Many metal detectors are unable determine the difference between 10 karat gold rings and nickels, of which he found 42 that day, but Ditto’s instrument is a little more precise.

The ring didn’t have much shine to it as he dug it out of the ground, covered in decades of earth, but after rubbing off some soil he was able to see it was a Boulder City High School class ring, from the class of 1985.

With a little more cleaning, and the help of his wife, he was even able to determine the cursive name inscribed on the interior: Nancy Morrel.

Since he began using the metal detector four years ago, Ditto has found countless coins, bits of jewelry and dozens of rings, many of them gold wedding rings, but never in the past has he been able to determine a way to find the owner.

Armed with a name, Ditto hoped this time would be different, and he was not disappointed.

After reaching out to the Boulder City Review and getting the story on Facebook, people from the Boulder City community leapt to his aide, and in less than two hours he received a call from an overjoyed Nancy Vandewalle.

Vandewalle had lost the ring in the spring of 1985, after wearing it for just three months.

Ditto hoped to have the ring cleaned a little before returning the lost item to Vandewalle the next afternoon, and upon hearing his story, Oro Jewelers cleaned and polished the treasure at no charge; they even provided a box to hold it.

Vandewalle met the Dittos on Saturday at the Hoover Dam Brewing Co., and when she opened the box and saw her ring gleaming in the sun, she couldn’t help but smile.

When she slid the ring on to her finger for the first time in more than 30 years, it still fit, and she began to tear up as she was overcome by memories.

Mike and Cookie, of Pocatello, Idaho, were making their way home after watching their son compete in a triathlon in Palm Springs when they decided to stop in Boulder City.

They had heard about the city’s historic downtown, as well as the plentiful antique shops, and thought it could be the perfect place to discover an unexpected treasure. It seems they were right.