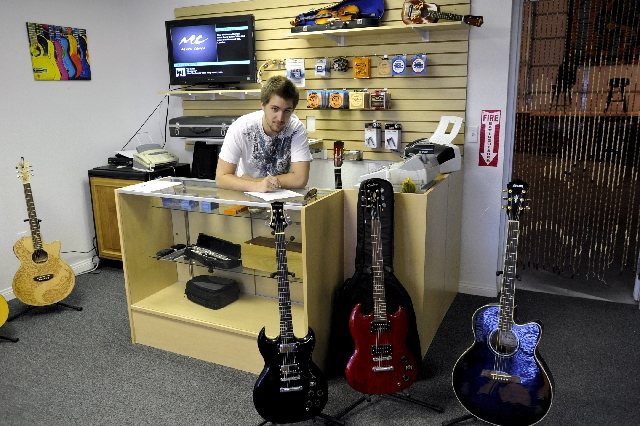 College isn’t for everyone, including the owner of Dam Guitars, 730 Canyon Road, Boulder City’s newest music store and performance venue.

Ricky Arcand, 19, who recently graduating high school in Las Vegas, attended University of Nevada, Las Vegas for one semester. It was one semester too many for Arcand, who had been studying guitar for four years and realized it was the only thing he wanted to do.

When he broke the news to his mother, rather than urging him to continue school, she told him she would help him open a guitar store.

Around the time Arcand and his mother began discussing the business, she became romantically involved with Djamel Kalafate, former owner of Boulder City’s Le Sagittaire restaurant and live music venue.

In the wake of the short-lived Le Sagittaire’s closing in 2011, Kalafate said he had been considering opening a new music venue.

“After the experience at Le Sagittaire, it ingrained in me that this was my environment,” Kalafate said.

So with help from his mother and Kalafate, Arcand opened Dam Guitars last month.

Arcand will focus on running the shop, and Kalafate plans to focus on the venue.

“It’s been a thought for a long time, and it’s finally starting to come together,” Arcand said.

Dam Guitars offers music lessons in guitar, taught by Arcand, as well as violin, piano and drums, taught by other instructors.

It also serves as a retail shop for miscellaneous small items, including guitar strings, tuners and reeds for woodwind instruments.

Arcand said he believes the shop will be helpful to local musicians and students who previously had to drive to Las Vegas for equipment.

“We want people to bring in their instruments so we can sell them,” Tracy Arcand said.

Dam Guitars features a warehouse in the back of the shop, which has been converted to an all-ages performance venue with a stage.

“I think basically anything is on the table,” Ricky Arcand said.

His mother, however, said the venue will not be a place for parties.

“It’s not a club. It’s not a party place. It’s for the appreciation of art and music,” she said.

The venue’s first concert will be Saturday at 8 p.m., with local rock band Boo Fighters, a family band that covers the songs of popular modern rock band Foo Fighters. Admission is $5.