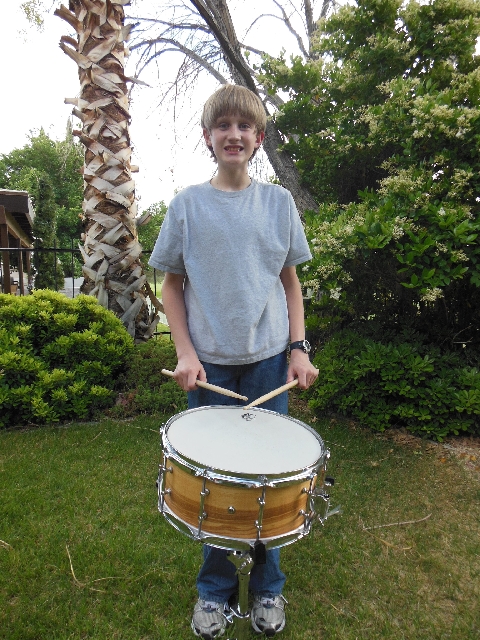 Not many 13-year-olds find themselves playing with a university-level orchestra, but Johann Thomsen is unlike most 13-year-olds.

Johann, a seventh-grader at Garrett Junior High School, will perform tonight with the Las Vegas Civic Orchestra in room 160 of the Beam Music Center on the University of Nevada, Las Vegas campus. The free concert is open to the public and begins at 7:30 p.m.

The orchestra will be performing pieces of music by classical composers Carl Maria von Weber, Joseph Haydn and Jaromir Weinberger.

Johann will be featured as a soloist in “Concerto for the Timpani” by Weinberger, which was composed in 1939 and is one of a small handful of concerto works for the timpani.

He began playing with the civic orchestra in December at the insistence of his parents. His mother, Sharol Thomsen, is the orchestra’s principal oboist.

However, he found he enjoyed the challenge of playing with a more mature group of musicians.

“It’s kind of nice to transition from a middle school band to a college-level band where they have the nice equipment that’s pretty new and people are more serious about their music,” Johann said.

The civic orchestra, sponsored by the UNLV Department of Music and the Division of Educational Outreach, is a community ensemble open to any UNLV students and Las Vegas-area residents who wish to perform in an orchestra.

The ensemble features amateur musicians and professional musicians playing on instruments they are less familiar with.

Tonight’s concert will be the third concert Johann has played with the orchestra, and his first experience as a soloist.

“Little by little, he has grown to be quite a fine young percussionist,” Trinkle said.

Johann said he enjoys being a percussionist because he is not stuck with one instrument.

“I like the variation of the instruments instead of just having one that plays several octaves,” he said.

The roughly six-minute “Concerto for the Timpani,” played with the timpani accompanied by trumpets and bassoons, will give Johann a chance to showcase his new skills, Trinkle said.

Johann said that his playing with the civic orchestra has helped with his playing at Garrett.

“UNLV taught me more about how to play my instrument and then when I take it into normal band it helps,” he said.

Johann said he has “a lot of other interests,” including computers and rebuilding fire alarms and exit signs.

Though he does not plan to pursue music professionally, he said he will probably use his music experience to help him get college scholarships.