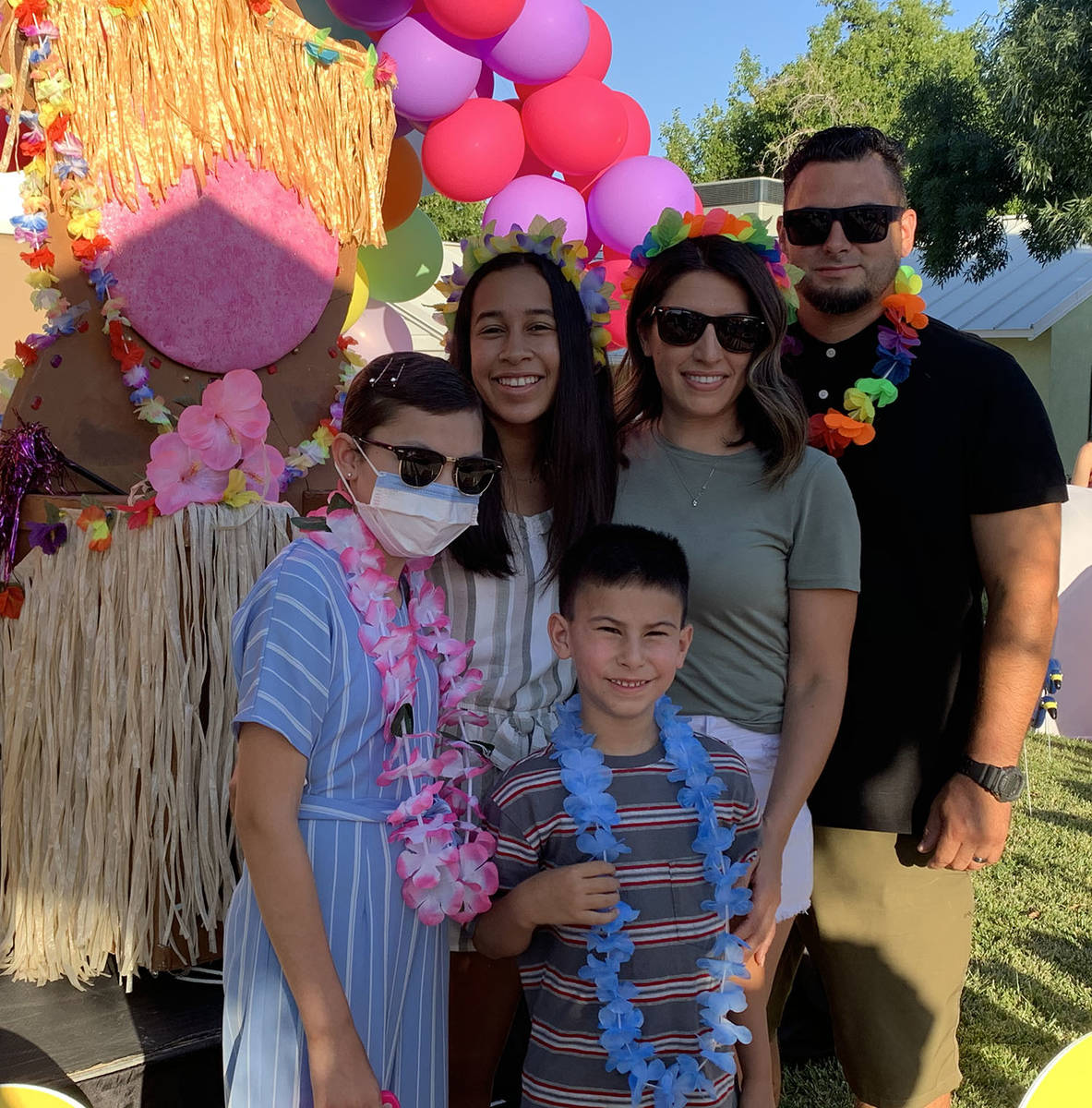 (Hali Bernstein Saylor/Boulder City Review) The Giamanco family, from left, Emilee, Natalee, Preston, Marissa and Joseph, paused for a moment before the start of a parade in front of their Avenue I home to celebrate Emilee’s 11th birthday, June 18. Members of the community drove by their home, dropping off flowers and gifts for Emilee, who was diagnosed with an aggressive form of cancer in November. 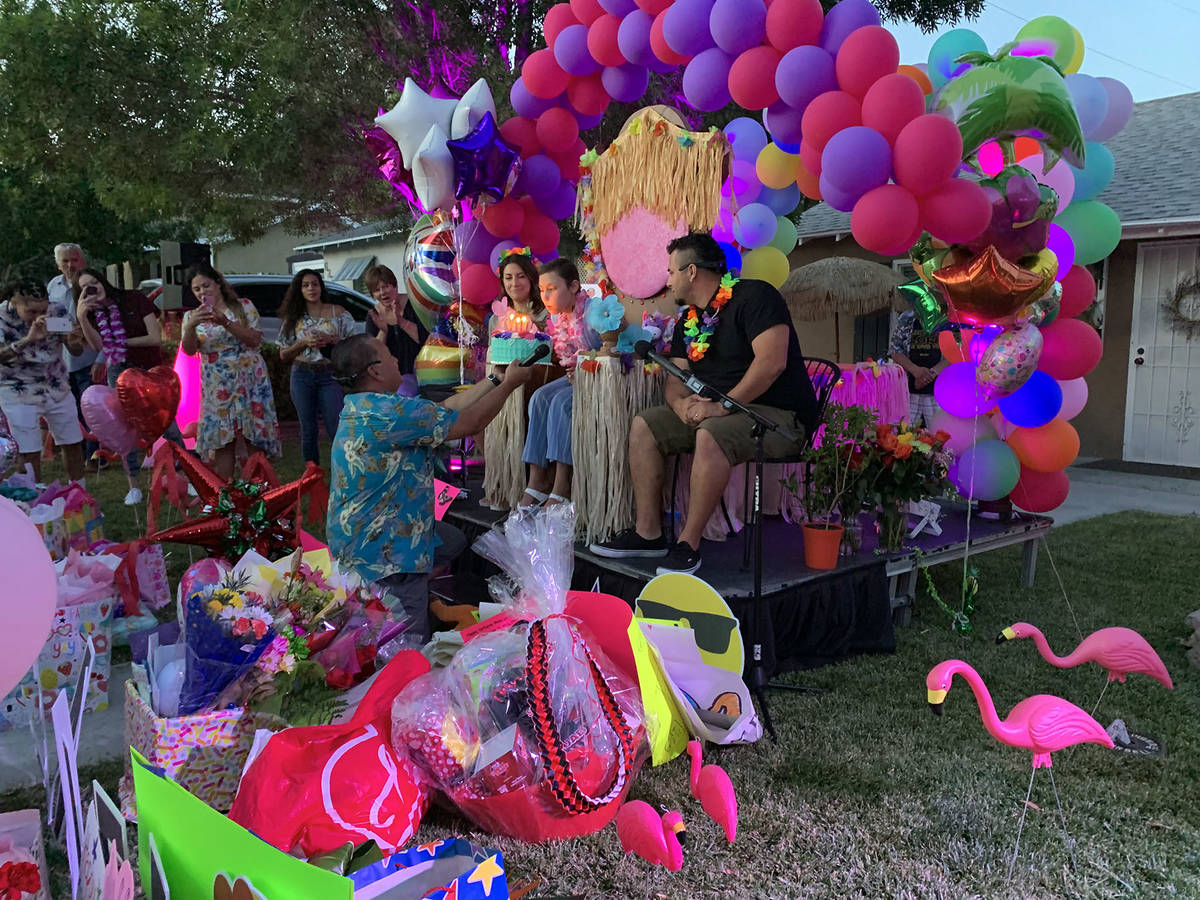 (Hali Bernstein Saylor/Boulder City Review) Emilee Giamanco, seated in the center, blows out candles on a birthday cake presented by Mike Pacini, kneeling, who helped organize a parade in honor of her 11th birthday, June 18. Looking on are Emilee’s parents, Marissa and Joseph Giamanco. 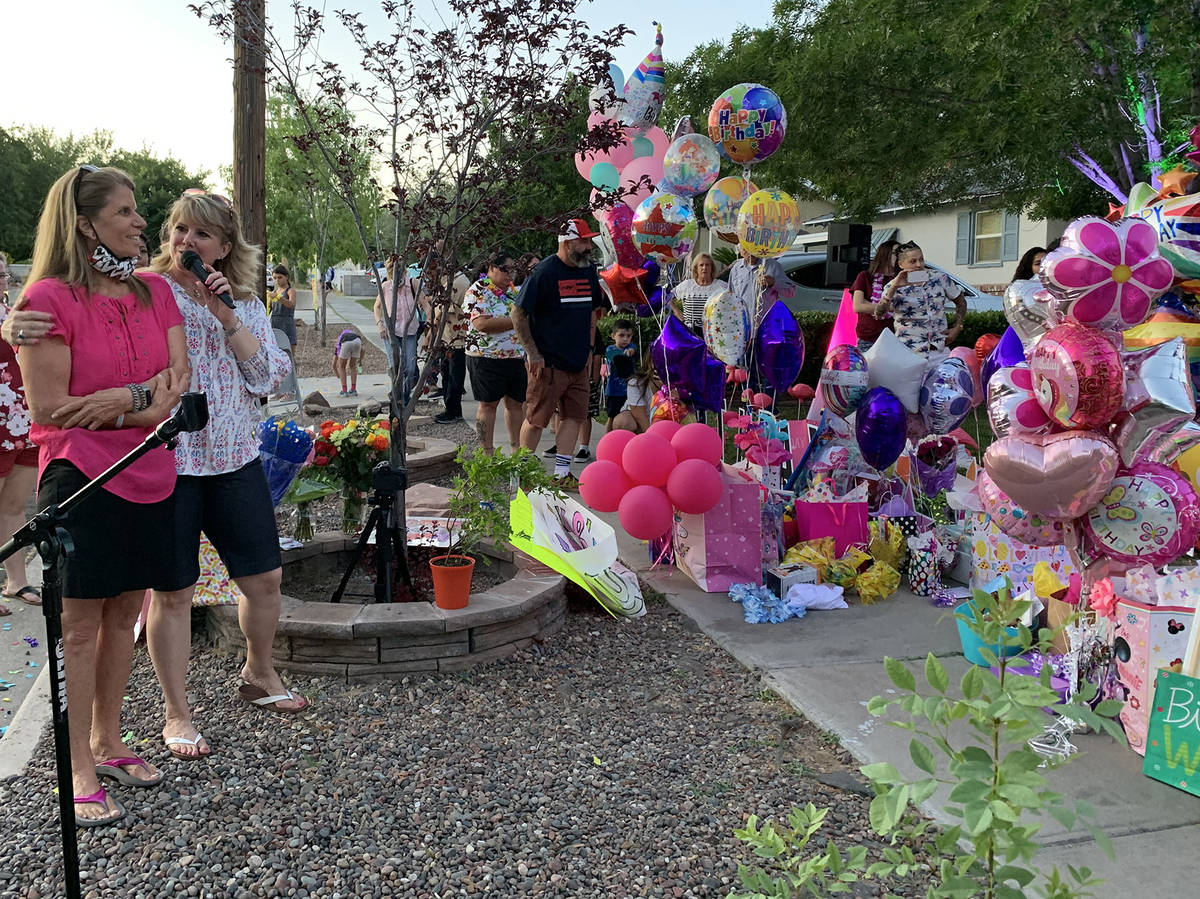 (Hali Bernstein Saylor/Boulder City Review) Cheri Emerich, left, who works in the office at King Elementary School, chats with Jill Rowland-Lagan, CEO of the Boulder City Chamber of Commerce, who helped organize and the get word out about a parade in honor of Emilee Giamanco on her 11th birthday, June 18. Giamanco attended King elementary before being diagnosed with cancer and a brain tumor in November. 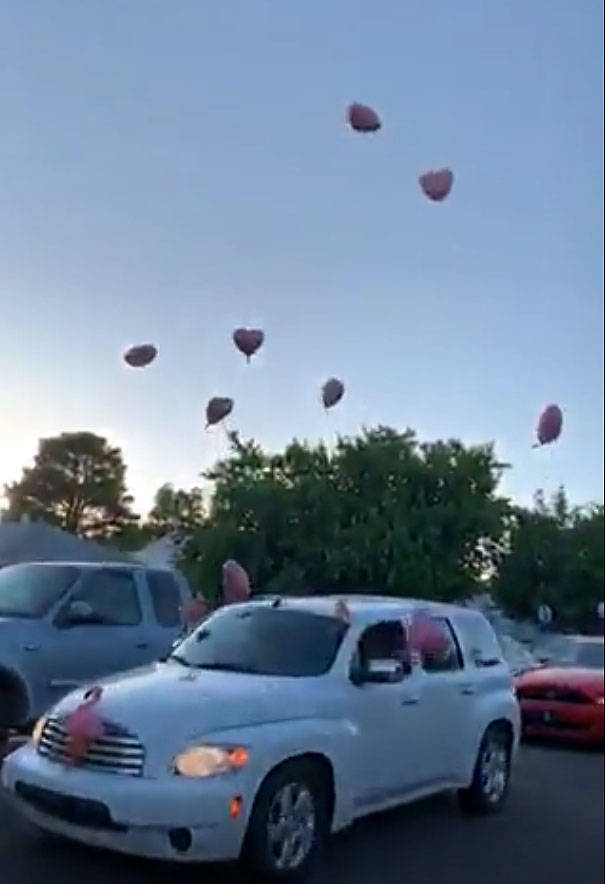 (Hali Bernstein Saylor/Boulder City Review) Heart-shaped pink balloons were released as part of the birthday parade for Emilee Giamanco, who celebrated her 11th birthday, June 18, and was diagnosed with an aggressive form of cancer in November. An hour-long parade of cars passed by her home on Avenue I to help her celebrate.

It was a picture-perfect day as hundreds of cars, many decked out with tropical decorations, colorful balloons spilling out of their windows and signs covering their doors, passed slowly by a home on Avenue I on June 18 as Boulder City residents came out in full force to wish one girl a happy 11th birthday.

The parade, which lasted well over an hour, was held in honor of Emilee Giamanco, who is battling an aggressive brain cancer.

As they passed by, people dropped off bouquets of flowers and balloons, stuffed animals, gift-filled baskets and bags, cards and cash.

In addition to the many Boulder City residents, special guests at the celebration included Chance, the Golden Knights mascot, accompanied by several members of Vegas Vivas cheerleader squad; Spruce, the Las Vegas Aviators mascot; and Cinderella. She arrived, not in a golden carriage that was once a pumpkin, but in a black stretch limousine and bearing a small pink box that contained an all-expense-paid trip to Disneyland from United Nissan. Cinderella also serenaded Emilee, wishing her a happy birthday.

“This is amazing,” said Emilee, who waved to all who passed by.

Emilee’s mom, Marissa Giamanco, said the parade was originally intended to be a small gathering with family and close friends.

But once word of the party got out, “the rest is history,” she said.

Marissa Giamanco said among those invited was Cheri Emerich, who works at King Elementary School where Emilee was a student. She let Mike Pacini know about the celebration and he jumped on board and put plans into place to throw a party of a lifetime.

“She just inspires me,” Pacini said about Emilee.

After meeting with Emilee and her parents, he said he felt he needed to do something to help out.

“No little girl should have to do that,” he said of her illness and treatment.

He first became acquainted with the Giamanco family while working with Emilee’s aunt, Lori Tesch, at Lake Mead Cruises.

In addition to organizing and DJing the parade, Pacini started a Go Fund Me account to raise money to send the family to Emilee’s favorite place: Disneyland. He set a goal of $10,000 and as of Monday afternoon, had raised more than $11,200.