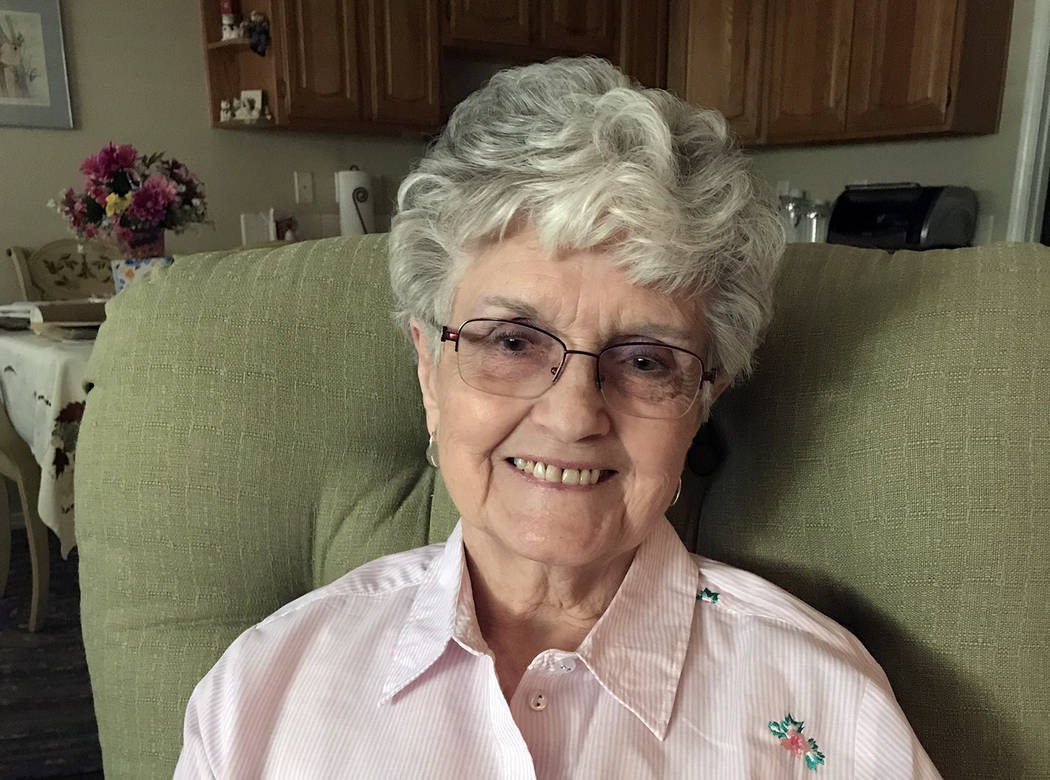 Hali Bernstein Saylor/Boulder City Review Ethel Huish of Boulder City celebrated her 90th birthday May 8; a party in her honor, attended by more than 100 family members, was held Saturday.

More than 100 family members from throughout the Southwest surrounded Ethel Huish of Boulder City on Saturday, May 5, as she celebrated her 90th birthday.

With the exception of four relatives who live in town, all the guests traveled from out of state to mark the occasion with Huish.

Her son Ron Huish, who planned the party, said she told him she was glad family could get together to celebrate a birthday and not for a funeral.

She attributes her longevity to hard work and clean living.

Huish was born May 8, 1928, in Douglas, Arizona, a small town on the border with Mexico. She was the youngest of four children. Two of her brothers died when they were in their teens, and the other one died when he was 79.

She married her husband, Teddy Huish, on May 30, 1946, just a few days after graduating from high school.

She said she met her future husband after his cousin, whom she was dating, asked him to look after her when he had to leave town for a bit.

During her lifetime, Huish worked several jobs, including as a nurse at the county hospital in Douglas, as the accountant for the family’s laundry and dry-cleaning business, as the accounting supervisor at Cochise College, and for a construction company. Though she pursued accounting positions after leaving the hospital, Huish said she never completely abandoned the field, working as a substitute at doctors’ offices when their regular staff went on vacation.

“I enjoyed them all,” she said of her various jobs. “I always wanted to learn new things.”

Additionally, she was active in The Church of Jesus Christ of Latter-day Saints, serving as a seminary teacher for 15 years and stake president for 10 years.

“She is a woman of class, always helpful to those who need help, always loving and never says anything bad,” said Inez Lilly, a cousin who came to the celebration.

Huish was also an avid seamstress and made five Western shirts with pearl snaps for each of her sons at the start of each school year, many with embroidered yokes, according to Ron Huish.

Teddy Huish died 21 years ago. She moved to Boulder City in 2004 to be near Ron Huish and his family.