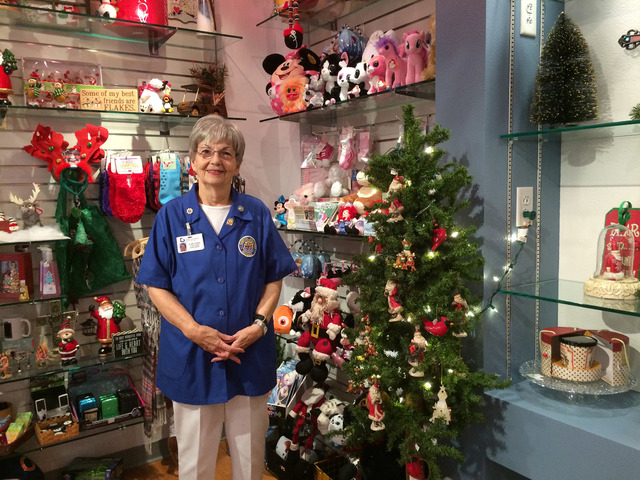 The Auxiliary at Boulder City Hospital is the epitome what an auxiliary should be. Its sole purpose is to provide help when it is needed.

Its 70 members are there to serve: working in the gift shop, helping with long-term care, assisting in the office or providing aid to various departments, said Barbara Murphey-Framke, who is wrapping up her fourth year as president and is becoming a director.

Murphey-Framke and Jennifer Floyd, who will take the helm of the group in 2015, said it is their desire to find new opportunities for auxiliary members to volunteer.

“If you do not want to work in the gift shop or with long-term care, we can find other opportunities,” she said. “We will look at your skills and incorporate them to help the hospital.”

Murphey-Framke added they hope to create some services that larger hospitals offer, such as a traveling library.

On average, volunteers donate more than 14,500 hours a year to the hospital.

But for the members, being part of the auxiliary is just a way to help and make friends.

“I get such a satisfying feeling. Everyone here is so nice,” said Aryliss Cerbin, who has been working in Goldie’s Gift Shoppe for about 2½ years. “I’m getting to know the nurses — some by name and some just by their smiles.”

Cerbin joined the auxiliary at the urging of her friend the late Goldie Begley, who was its president until illness forced her to resign in 2011.

Janine Perkins agreed that it is the friendliness of the people that keeps her coming back to the hospital and working in the gift shop, where she has volunteered for about 3½ years.

It’s that and more. Cerbin said the auxiliary plays a vital role in the hospital’s operation.

The Auxiliary of Boulder City Hospital was born in 1954 when the Bureau of Reclamation, which operated the hospital, suddenly decided to turn the facility over to the city.

About $15,000 was needed and citizens went door to door collecting money to ensure that Boulder City had a hospital for its residents, Murphey-Framke said.

Although its roots go back to collecting money to keep the hospital open, today it is focused on providing the necessary tools and equipment that are not funded by the facility’s operating budget, she said.

Each year auxiliary members work with the staff to see what new equipment it could use to assist it with its job. Purchases have included a bedside pulmonary function testing machine, microscope, temporal artery thermometer, microwave and meat/cheese slicer for the kitchen and floor burnisher.

In the past 10 years, the auxiliary has donated more than $100,000 in equipment and funds to the hospital.

The majority of the group’s funds are raised through sales at Goldie’s Gift Shoppe, which recently expanded and moved to the new hospital lobby.

Murphey-Framke said the new location has been a boon for the auxiliary, with sales in the first full month it was open the highest ever.

“With the new location, community members come in, not just those coming to the hospital,” she said.

People are discovering the shop’s high-end gifts and upgraded merchandise, thanks in large part to the efforts of Kathy Calhoun, its buyer.

People are attracted to the good prices it offers and the fact that there is no sales tax because the auxiliary is a nonprofit organization, Murphey -Framke said.

The auxiliary also provides scholarships to Boulder City High School graduates who plan to pursue medical careers, as well as for hospital employees who need advanced training. In the past decade, the group has awarded $22,000 in scholarships.

“The Auxiliary at Boulder City Hospital is a collection of loyal, dedicated, hardworking individuals that anchors the hospital firmly in the community. They raise money for the hospital, donate needed supplies and equipment and award scholarships to young men and women seeking a career in health care. We are grateful for their presence and participation,” said Tom Maher, CEO of the hospital.

Even though the group raises money, the role of fundraiser belongs primarily to Boulder City Hospital Foundation, which sponsors the annual Art in the Park and Heart of the Arts gala.

“We do work hand-in-hand with them,” Murphey-Framke said. “The way I look at it, we’re both here to help the hospital.”

Annual dues are $10. For information or membership applications, visit http://bchcares.org/auxiliary/.