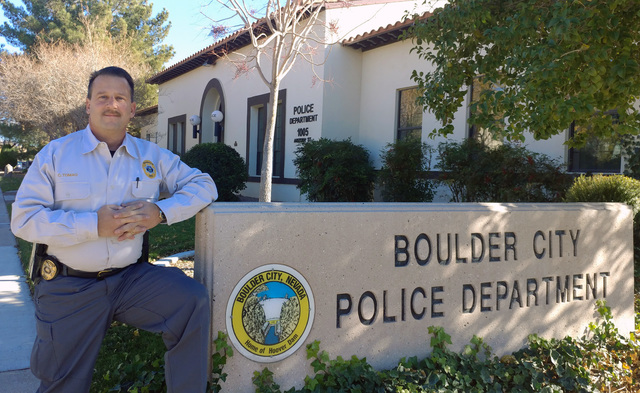 Hunter Terry/Boulder City Review Detective Craig Tomao has been with the Boulder City Police Department since 1998 and has been an adviser for the Boy Scouts' Explorer program for most of the years the group has been active since 2000.

Detective Craig Tomao has been with the Boulder City Police Department for nearly two decades, but that is only part of his commitment to the community.

Tomao also has been a stalwart supporter of the Boulder City Law Enforcement Explorer Program, where he works with kids who are interested in a career in law enforcement.

The Explorer program is an independent program that works in conjunction with the Boy Scouts and provides high school students an opportunity to experience a variety of careers firsthand as they work with an adviser from that profession.

Tomao first joined the program as an adviser in 2000 for Boulder City’s Post 198, one of the oldest in Southern Nevada, and stayed with it until it went defunct in 2003. It was a perfect fit for him as he joined the Scouts when he was 13 and made it to Eagle Scout before he was done.

When the program was renewed by BCPD officer Scott Pastore, Tomao soon signed back on. He has remained involved for the past five years, helping the kids decide if a career in law enforcement is something they want to pursue.

“The kids get to experience a lot of what we do every day,” Tomao said. “The program provides guidance and mentors, and it helps teach them some structure. They go on ride-alongs and assist with duties at the station. Some might go into a career in law enforcement, many won’t, but it’s a program that helps keep them on the right path and away from trouble.”

“The Scouts and the post’s senior adviser Pastore really emphasize community involvement for the group,” Tomao said. “It instills a positive attitude as well as a sense of respect, which are fundamental building blocks for life.”

The impact on the kids of Tomao’s dedication and attention to detail are things that really cannot be overstated, according to Pastore, who has known Tomao his entire career.

“I worked with him my first day on the street, and we’ve always complemented each other well,” Pastore said. “He’s tough, but he really wants to see these kids succeed, and he won’t give up. We believe in second chances; even if a kid is having a hard time, he puts in the work to see them through.”

Since September, the group has trained for the Chandler Tactical Competition, held by the Chandler Police Department in Arizona, which, according to Tomao, is a pretty big deal and the kids were really excited. Their work paid off Jan. 13-15 as the post brought home five trophies, including two for first place, from the event that included 59 teams and more than 1,000 participants from across the country.

The competition tested the Explorers’ skills handling police duties in a live-action situations, such as dealing with a downed officer, an active shooter or a drug raid.

According to Deanna Heisler, the Exploring executive for the Las Vegas area, if it weren’t for leaders like Tomao, many of these kids would be lost and have no real idea where they want to go with their lives or what they want to do.

“He works all the special events and donates an extra 20-plus hours a week,” Heisler said. “The kids can’t do anything without an adviser, and he does it without pay, recognition or much thanks. It’s work that’s really essential to these kids’ development.”

Tomao also had a mentor that led him to a career in law enforcement. His father was a New York Police Department patrolman for 20 years and although he didn’t join law enforcement until he was in his early 30s, Tomao knew for years that he wanted to follow in his father’s footsteps.

His father retired in 1976, when Tomao was 13, and they moved to Las Vegas. After school Tomao moved back to New York for a few years, from 1988-90, but it was prohibitively expensive, and he returned to the Las Vegas area.

He has lived in the valley ever since, working, contributing to multiple communities and raising three kids, all of whom still live in the area, including a 33-year-old son, a 20-year-old daughter and a 16-year-old son who recently became an Eagle Scout just like his dad.

After spending his 20s working in the auto industry, even running his own tire shop for a few years, Tomao joined the North Las Vegas Police Department’s reserves in 1998. The next year he joined the BCPD full time and hasn’t looked back.

North Las Vegas gave him a taste of the kind of work his father did in a bigger city, and it didn’t take him long to realize Boulder City was the kind of place he wanted to protect.

“It’s different than what my father dealt with in the South Bronx, especially the severity of the criminals,” Tomao said. “There you had to deal with everything, up to the worst of the worst, just going from one call to the next. Here you actually have the chance to help the people you’re dealing with.”

He says he loves the closeness of the town, the fact that police here get to know the people for whom they are working.

“In larger agencies you’re just a guy driving a car, here they all know me as Officer Tomato,” Tomao said. “Here you get to know the people on both sides of the law, but mostly you’re just dealing with good people.”

After 16 years with the department, the end is in sight as Tomao will be retiring in about four years, on Jan. 16, 2021.

“I look forward to it, but I love my job,” Tomao said. “It can be trying, but it’s very rewarding. We have a unique community, and it’s a pleasure to be a part of.”