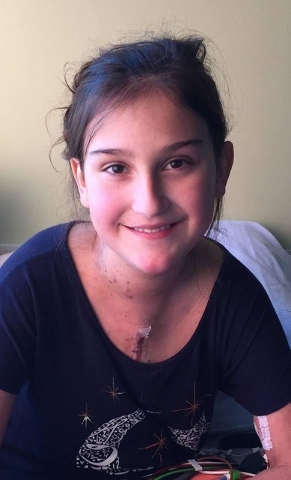 Madison Elizondo, 12, a former student at King Elementary School in Boulder City, is fighting a form of brain cancer, a side effect from the medication she must take since getting her heart transplant in July 2015. Photo courtesy Elizondo family

Nearly a year after 12-year-old Madison Elizondo received a heart transplant, the young girl is once again battling health issues.

The former King Elementary School student is back at Childrens Hospital of Los Angeles, where she received her new heart last July, for chemotherapy treatments.

According to her father, Paul Elizondo, one of the side effects of the medication she must take to keep her body from rejecting the new organ is post-transplant lymphoproliferative disorder.

Since the transplant, she has continued with a strict regimen of follow-up appointments with her doctors at the hospital, but she began having seizures and uncontrollable vomiting.

In May, she was diagnosed with the disorder, which came in the form of a malignant tumor on her brain.

Paul Elizondo, a native of Boulder City who now works with the Metropolitan Police Department in Las Vegas, said post-transplant lymphoproliferative disorder is one of the most common cancers in those who receive transplants and it behaves like an aggressive lymphoma.

It only affects 1 to 2 percent of people who receive heart transplants, he said.

Madisons mother, Gina Elizondo, also a Boulder City native and former special education teacher at King Elementary School, is staying in Los Angeles to be near her daughter. Madison was born with hypoplastic left heart syndrome, a form of congenital heart disease in which the left half of the heart, including the aorta, aortic valve, left ventricle and mitral valve, is underdeveloped. She had six open-heart surgeries before receiving her new heart in July 2015.

When they received the call about a heart being available, Madison has been placed on a ventilator and her other organs had begun to fail. A fundraising campaign to help offset some of the familys costs has been started at officerdown.us. As of Tuesday, $929 of the $5,000 goal had been raised.

The familys ties to law enforcement run deep. In addition to her father, a 16-year veteran, Paul Elizondos brother, Raul Elizondo, was a North Las Vegas Police Department officer who was killed in 1995 while on duty. Madisons older brother, Mathew, works at the Nevada Department of Corrections.