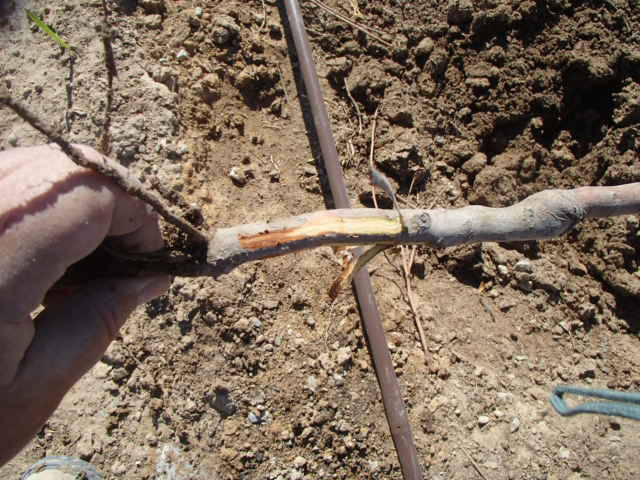 (Bob Morris) This fruit tree has collar rot disease from keeping the soil too wet or planting it too deep. The brownish color of the wood beneath the bark is indicative of the disease. 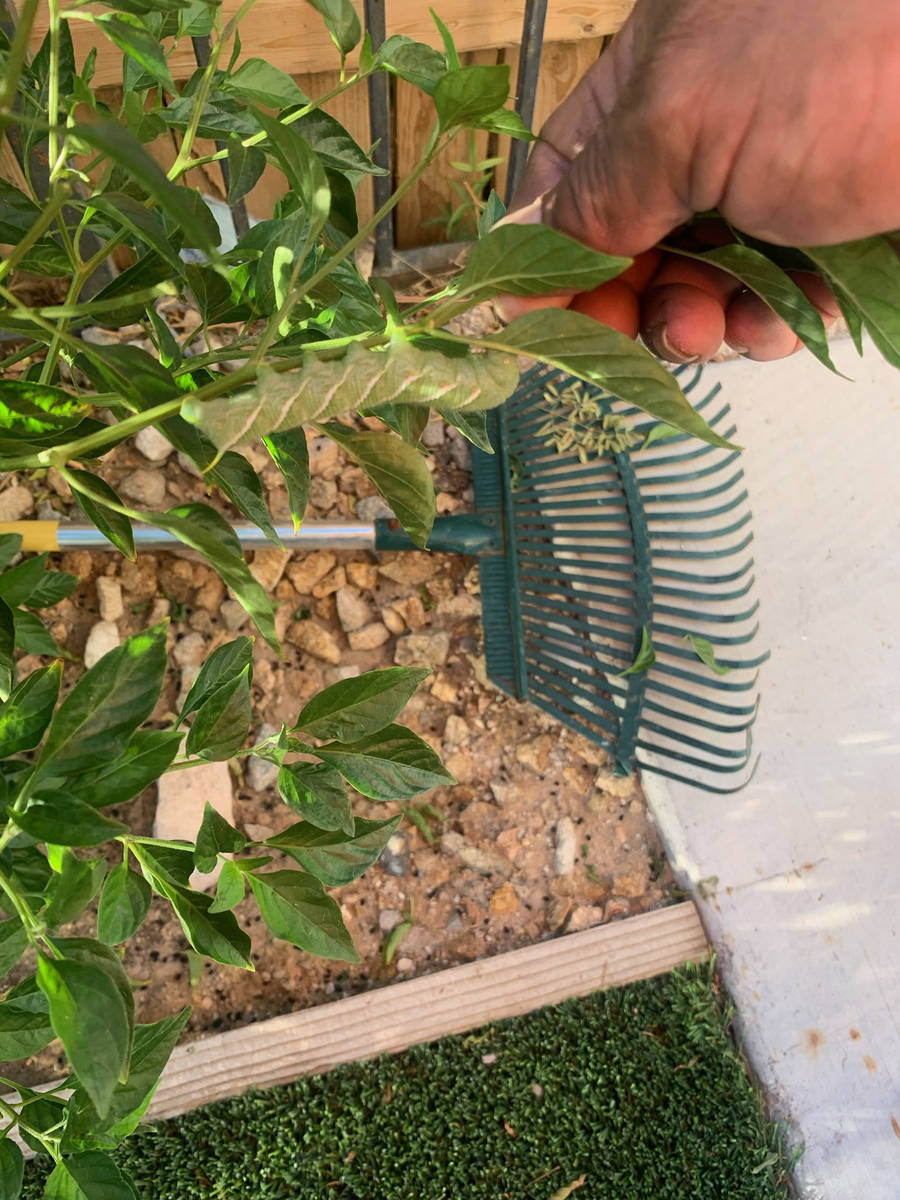 (Bob Morris) The recent rains may have encouraged a larger population of hornworms, which like to eat tender young leaves on tomato, pepper and eggplant plants. 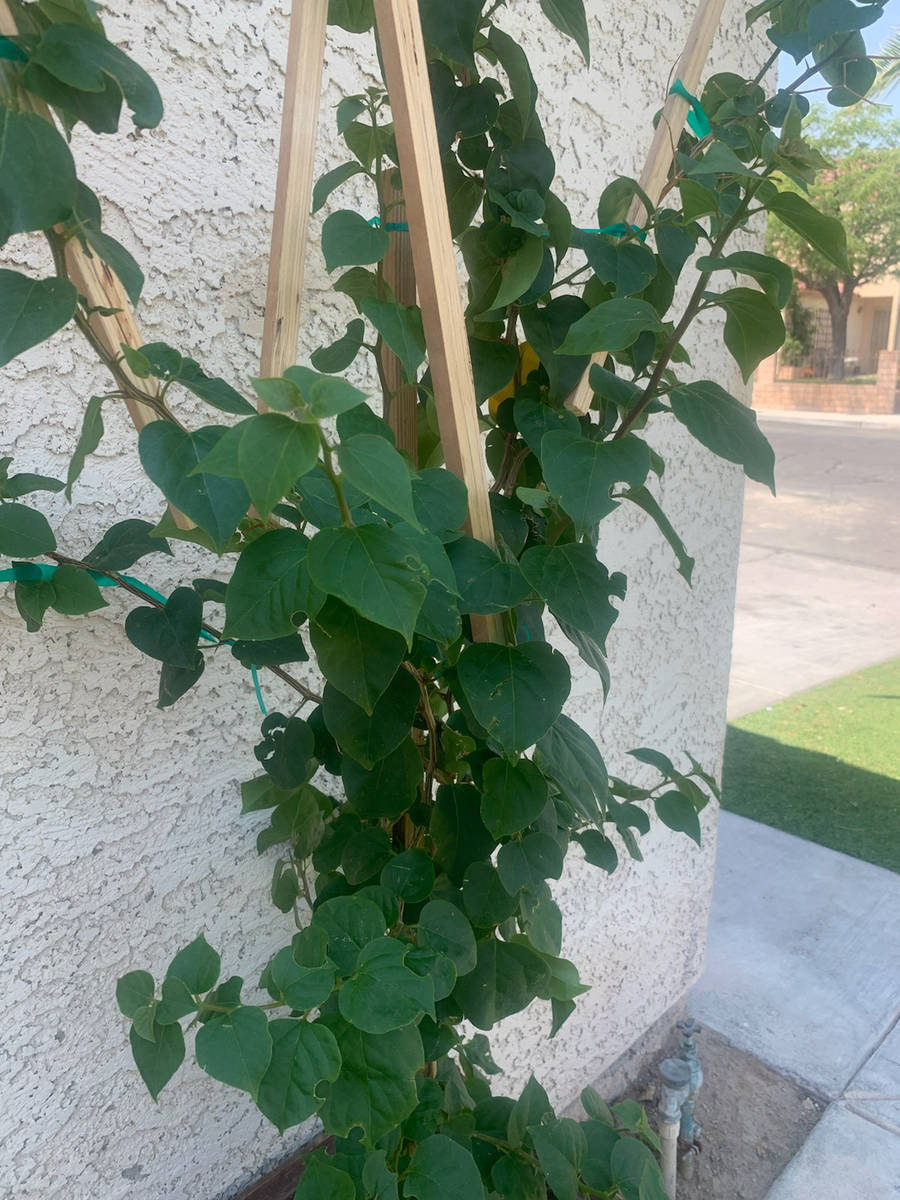 (Bob Morris) The small circular cuts out of this bougainvillea are from the female leaf cutter bee, which uses the pieces for nesting her young.

Q. I have a one hopseed bush out of about 20 that were planted about seven years ago that died about a week ago after the rain. I am watering them deeply only once a week. Before that they were all doing fine.

A. Hopseed bush is a great choice for a desert landscape; it is adapted to the high temperatures of the desert and low water use. It is evergreen, can make a good visual screen and will grow to 15 feet in height with irrigation. I hoped there would be something that jumped up at me about hopseed bush and what you might be doing but there was not. I will have to make an educated guess based on the KISS principle.

I decided it is most likely root or collar rot disease (Phytophthora spp.) due to the recent heavy rains and possible poor drainage. All desert plants, including hopseed bush, are prone to this disease if grown in moist soils or in low spots in desert landscapes that accumulate water. Your watering schedule was good and I considered you had success growing it for the past seven years.

This bush is native to our desert Southwest. Nearly all our desert trees and shrubs are susceptible to root and collar rot when grown in even seasonally wet soils. The recent rains may have contributed to this disease. Root or collar rot disease can be caused by overwatering, poor drainage or both.

Check to see if this particular plant was in a slight depression; it might have accumulated water during the recent rain. High temperatures can make this problem worse and the disease act faster. I think the combination of high temperatures and poor drainage may have contributed to this problem. If this is the case, watch for root and collar rot to occur in other desert shrubs planted in depressions in your landscape or at the end of a slope where water accumulates.

What to do? If you want to confirm my speculation, then inspect the shrub at the place where the main stem enters the ground. With your thumbnail or a small knife, scratch the bark along the stem and see if the wood under the “bark” or skin near the soil level is brownish in color. If this wood is discolored, then it will be brown, not white or greenish white as it should be. Also, inspect any living roots you might find in the soil. The roots should be creamy white in color and growing vigorously. The difference between collar rot and root rot is just its location.

Don’t replant in the same hole. It’s OK to plant a new hopseed bush 2 feet away. Make sure to plant it in level or raised ground and dig the hole three to five times wider than needed. Make sure it is planted at the same depth it was in the container. Otherwise, make sure they are planted on a slight elevation.

Amend the soil with compost at the time of planting to improve drainage and resist disease attacks. The soil should drain water overnight when filled. You could auger four holes, about 3 feet deep and 12 inches from the main stem of these plants, to improve water drainage.

It’s possible it could recover but if the top died due to collar rot, I doubt it. You will know for sure by early October. If the brown top bothers you and you are not sure it’s dead, cut the entire shrub off about 1 inch above the soil and see if it regrows.

Q. You recommend growing vegetables and herbs in a raised bed. Why can’t I grow them in the ground?

Growing vegetables in the ground is less expensive and avoids some of the pitfalls of raised beds with constructed sidewalls. I prefer to grow vegetables and herbs in plain old desert soil amended with compost. Just keep your feet out of the growing areas between the times of planting and harvesting, which is something I do encourage people to do.

I started growing vegetables and herbs in an amended desert soil in the late 1980s. The soil I had access to was pathetic when I started. You had to use a pick to start a hole and the soil was classified as a sandy loam. But it improved with time. It is basically a raised bed without the sidewalls. It’s my modification of Bartholomew’s square foot gardening technique. It allows for the intensive growing of vegetables and herbs in a small area.

Just use plenty of compost when you plant; that’s the missing and magical ingredient. The first year growing vegetables in this kind of soil the results are good, the second year is better and the third year and after is perfection.

I do suggest growing vegetables and herbs in your first garden on the east side of the home or wall in at least 5-gallon sized nursery containers. Growing in containers avoids the drainage, nematode and salt issues. I also encourage people to mulch their vegetables and herbs prior to the heat with something that easily decomposes.

Q. I have a bougainvillea planted in my yard and some insects have been eating the leaves.

A. From your picture it looks like damage from leaf cutter bees. The damage they leave are round smooth circles cut out of the leaves about a dime in diameter. During the heat of the summer is when these female solitary bees actively cut partial circles from the tender leaves of plants like bougainvillea, large-leaved herbs like basil, bottle tree and others. The female solitary bee uses these cut leaf circles in nesting for her young.

I usually encourage people to leave them alone.

Q. What is this worm on my jalapeno pepper plant?

A. This is the caterpillar called a hornworm, the immature form of a hummingbird moth, also called a Hawk moth. See the spike (horn) on its rump? We start seeing these worms on irrigated plants in the Las Vegas area around late April or May. Seeing them is usually a spring phenomenon but the rains may have encouraged a large population of them later in the season.

They do like to feed on nectar from the jimson weed, a desert native. The “worm” or caterpillar gets larger by eating lots of leaves from all plants in the tomato family (tomato, pepper, eggplant) as well as young tender grape leaves. We don’t see them very often on fruit trees.

Because they are oftentimes green in color and prefer feeding on leaves inside the plant during the day to avoid detection, they can be very hard to see. Standing back quietly during the day and watching for plant movement is a way to know where they are located. Because they are large, they are easy to hand pick from plants. On a larger commercial scale insecticides have been used to kill them.

Q. What kind of cactus fertilizer do you recommend for my San Pedro cacti I started from seed? I repotted them last September with a cactus soil mix from a reputable company, but they are still very small and I’m worried about them.

A. There are two primary reasons why your San Pedro cactus, or any cactus for that matter, might not grow as fast as it should. It might be the fertilizer, but I suspect it might be the soil mix. Let me explain.

Sometimes soil mixes are marketed for cacti and succulents because they contain pumice. You will see it is added to the soil mix because it’s prominently featured. But the other ingredients in the soil mix are just, and possibly even more important, than pumice. Pumice is added for primarily for drainage improvement and to a lesser degree its ability to hold water. Pumice, as well as the other ingredients, can be important in soils for cacti, succulents and many other desert plants.

The better soils for cacti are primarily sand-based (sandy loam even sandy clay loam). Look for ingredients in the mix that might be hydrophobic: peat moss, coconut coir and bark-based products. Wood-based products are not hydrophobic. Hydrophobic ingredients should not dominate the soil mix or it may be difficult to wet after it’s dried.

The other ingredient important in cacti mixes is sand because it is filled with pores and is not hydrophobic. Add either sand or garden soil (natural garden soil is not hydrophobic) to your mix (no more than 25 percent) and see if that helps root growth before selecting a cactus fertilizer.