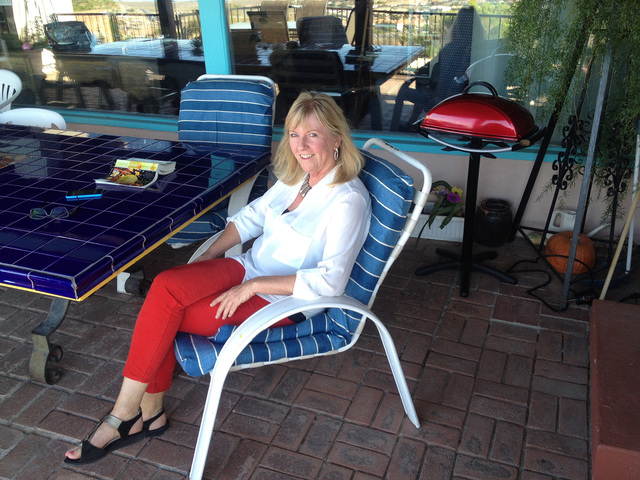 Sally Denton sits in her backyard overlooking the entirety of Boulder City. Her glasses sit on the patio table right next to the book she just put down.

The book, “The Money and the Power: The Making of Las Vegas and Its Hold on America,” has her name on the bottom of the cover.

She’s supposed to have a discussion on it, she says with a smile, but has to refresh her mind since she hasn’t focused on it in so long. “The Money and the Power” was published in 2001.

Thirteen years and five books later, Denton is on the final stages of her latest book, “Behemoth,” an investigative story about the Bechtel Corp., one of the six companies involved in the construction of Hoover Dam. Since the completion of the dam, Bechtel has grown into one of the largest contractors in the world.

“It’s a fascinating look at how corporations work today,” Denton said about “Behemoth.” “It’s a representation for the larger issues in America, and very few people know anything about Bechtel.”

Denton grew up in Boulder City and graduated from Boulder City High School in 1970. Her father, the late Ralph Denton, was a notable attorney and Clark County commissioner, as well as an ardent fighter for civil rights and liberties during the 1950s-’60s.

After graduating from college, Sally had a brief stint with the Boulder City News before moving to New Mexico, where she’s lived ever since.

Denton has written seven books since 1990, with topics ranging from corruption in Kentucky to Mormon pioneers, and an attempted assassination on Franklin Roosevelt, among others.

Now, she’s writing a book about an international company that gained its foundation after the Hoover Dam project that took place in her own backyard, the backyard she first came to know in 1959 when her family moved to their house atop Denver Street.

Bechtel’s important, yet mysterious reputation was one reason Denton wanted to tell its story. The fact that such an international powerhouse got its start in her hometown was beneficial in her decision to take on the topic.

“It’s the second-largest, privately held corporation in America,” she said. “And it’s a fascinating look at how corporations work today.”

Denton received the BMI-Kluge Fellowship from the Black Mountain Institute in 2013 that provided her with a $50,000 stipend and an office at the John W. Kluge Center at the Library of Congress in Washington, D.C., to conduct her extensive research on Bechtel.

She described her four months at the Library of Congress as one of the best experiences of her life.

College of Southern Nevada history professor Michael Green credited Boulder City with giving Bechtel the beginnings of a career that would later play a serious role on the international circuit.

“Bechtel is important to Boulder City’s story, and Boulder City and the Hoover Dam are important to the Bechtel story,” he said. “This was its first really big project, and it helped put Bechtel on the road to becoming one of the most important government contractors and multinational companies of the last 80 years.”

Green praised Denton for taking on a topic whose history isn’t well-known, and the fact that Bechtel has expanded immensely over the years makes it even harder to get the story, he said.

“No organization likes to air out its laundry,” Green said. “And doing it from the outside like Sally is doing is tough and comes with its own set of problems.”

During her time in D.C., Denton obtained information about Bechtel that wasn’t previously known to many, including the mysterious death of the company’s founder, Warren Bechtel, in Russia during the 1930s.

Green agreed that no matter how big Bechtel is today, Hoover Dam was the catalyst for its success.

“When you consider its enormous growth, you can trace the trajectory to the moment that bid was opened in 1931,” he said.

Denton said writing “Behemoth” has challenged her to find a different way to look at how she writes and researches. It changed her perspective on the kind of work she does.

“I finally figured out that what I do is investigative history,” she said. “I’ve been focusing on stories that victors aren’t writing.”

“Behemoth” is expected to be published by Simon and Schuster in 2015.