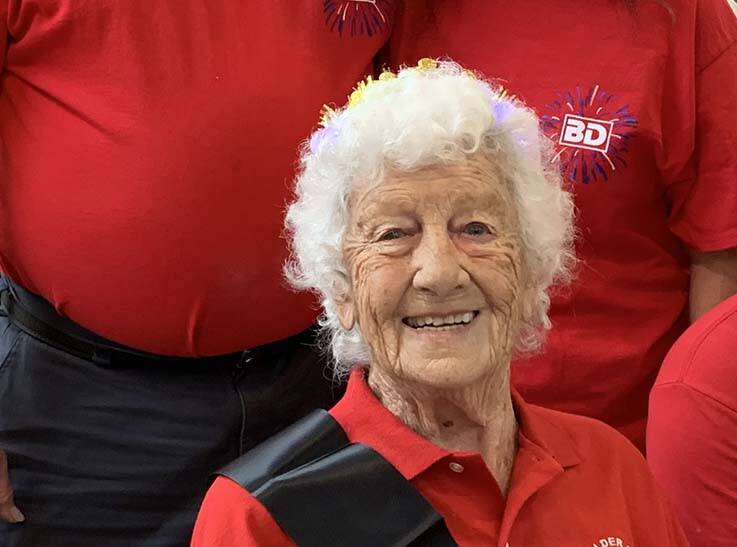 (Hali Bernstein Saylor/Boulder City Review) Gwen Davidson, front left, was the guest of honor Friday, June 24, at the Senior Center of Boulder City as she celebrated her 100th birthday.

“Yes. Happy birthday,” was the reply.

Davidson was the guest of honor at the center’s monthly birthday celebration. Each cupcake served at lunch had a golden 100 decoration on it and she sat at a table draped in a special tablecloth with silver balloons spelling out 100 as the centerpiece.

She recalls that her late husband, who died in 2000, was six months younger than her and that she thought he was “too young” for her.

Davidson grew up near London and said she will never forget the night when the bombing started in the city.

One day they discovered an unexploded bomb in her father’s cabbage garden, forcing the family to evacuate.

“He was so mad,” she said about her father’s reaction to the destroyed cabbages.

She and Robert Davidson married in England and then traveled by ship to the United States, coming through the St. Lawrence Seaway. They lived in several U.S. cities before settling in Boulder City about 60 years ago.

Davidson worked in the old Boulder City Hospital and then transferred to the new hospital before joining the staff at the National Park Service where she was secretary to the chief engineer.

She is an avid Scrabble player and meets twice a week with a friend to play.

Davidson said she also likes to play tennis and played every day for many years. She said she “loves to hike” — though she doesn’t recall hiking when she was in England — and would regularly go on 15-mile hikes near Carson City, where she lived during the spring hiking season. When she had to cut back, her trips were only 7 miles.

Davidson split her time between Northern and Southern Nevada for several years and returned to Boulder City as a full-time resident about five years ago.

Though she misses her mountain hikes, she takes her rescued Chiweenie, Little Girl, on walks about three times a day.

She was accompanied at Friday’s celebration by Scott and Kim Davidson of Boulder City, her son and daughter-in-law, and grandson Anthony Davidson.

Though she has lived in the United States most of her life, she still has some ties to England and received a special birthday message from Queen Elizabeth.