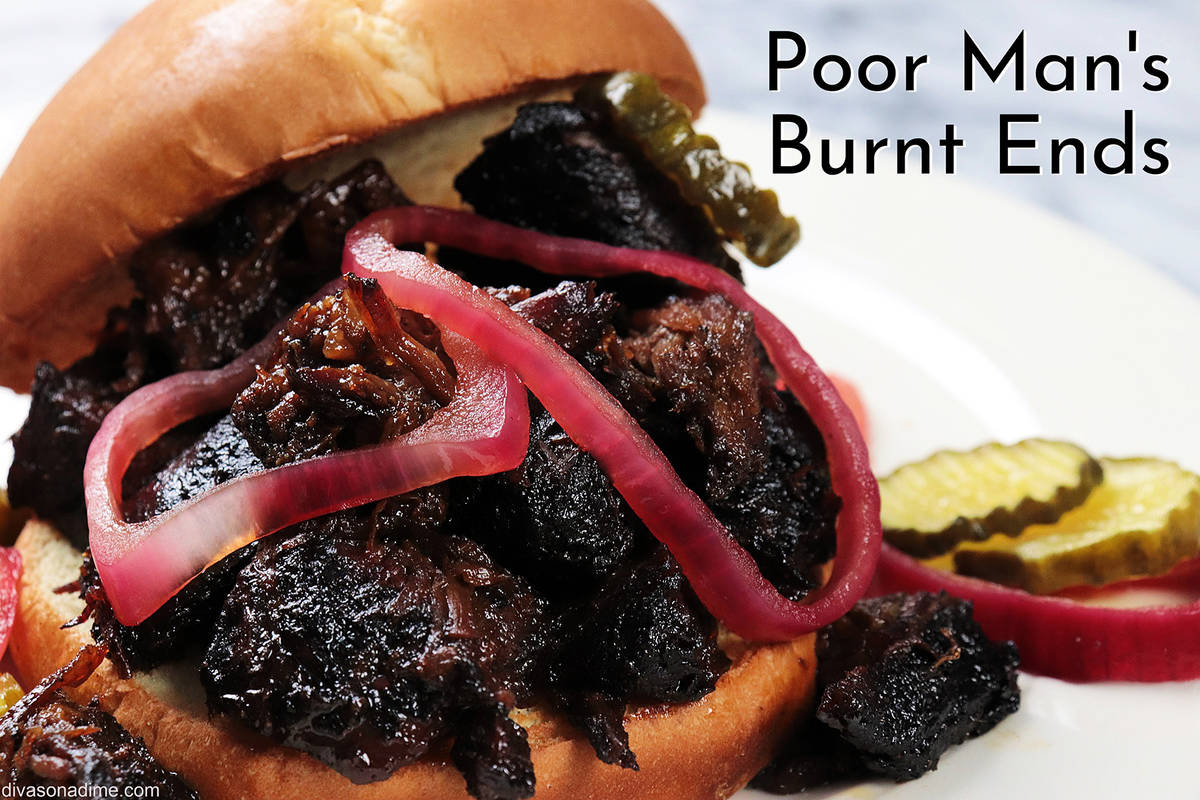 (Patti Diamond) Using a chuck roast and swapping out some time in a smoker for a few hours in the oven lets you replicate the taste and tenderness of traditional burnt ends.

Memorial Day weekend fills my heart with gratitude as we honor those who made possible the freedom we so often take for granted. It’s a weekend of recognition and remembrance. For many families, this weekend also signals the official beginning of grilling season. Care to join me in a patriotic foodie-licious happy dance?

My social circle is overflowing with barbecue fanatics. Consequently, we’re spoiled by amazing barbecue. When we get together, we usually slow smoke a whole brisket and the most coveted of all pieces are the “burnt ends.” Some of you are already nodding knowingly in agreement.

It used to be that barbecue joints would collect burnt end trimmings from briskets during the week and serve them all saucy and unctuous as a Friday night special. Well, it became such a hit many restaurants started featuring them on their regular menus. What started as scraps became the star of the show.

There are two problems with traditional brisket burnt ends: time and cost. But here’s a solution. We’re going to make “Poor Man’s Burnt Ends” using a chuck roast instead of brisket.

Brisket takes between 12 to 18 hours to cook and chuck roast, made with the directions below, takes about five hours. Chuck roast and brisket usually cost about the same per pound but a whole brisket weighs between 10 and 16 pounds and my recipe uses a 4-pound chuck roast. I’m going to satisfy your barbecue craving at a fraction of the time and cost.

Look for a chuck roast that’s nicely marbled with fat. It’s the smoke, rendered fat and caramelization that develops the signature smoky flavor we savor. To save time, I’m starting this on the grill or smoker to get some smoke and cultivate a layer of light char, or “bark.” The roast is then finished in the oven, cut into small pieces, smothered in your favorite barbecue sauce and returned to the oven until everything is sticky, caramelized, chewy and falling apart tender.

This recipe cuts several hours off the cook time, is less expensive than loading a smoker for hours and still yields exquisite results.

Choose a sauce with the tang of vinegar and mustard, but also brown sugar and/or molasses. You want the flavor to stand up to the char and fat but also caramelize.

Season your chuck roast on all sides with the easy dry rub.

Preheat your smoker or barbecue within the range of 200 F to 225 F. If smoking, use hickory, oak or mesquite wood. Place the roast in the smoker or grill over indirect heat and cook until it reaches a temperature of 165 F, approximately two hours.

At this time, preheat your oven to 250 F. Remove the roast and place it in a disposable aluminum baking pan and cover it with foil. Bake it in the oven until it reaches 195 F to 203 F, approximately two hours.

Remove it from oven and let it rest for 20 minutes.

Raise the oven temperature to 300 F. Cut the roast into 1-inch chunks. Try to get some bark on each piece to keep it from completely falling apart later. Put it back in the baking pan and sprinkle with brown sugar. Drizzle ½ cup barbecue sauce over the meat and toss gently to coat. Cover the pan with foil. Put it back in the oven for one hour.

By the way, this is what heaven smells like. Remove from the oven, add the remaining 2 tablespoons sauce, gently toss again, and return to the oven uncovered for 20 to 30 minutes to caramelize the sauce.

Serve on toasted buns with bread-and-butter pickles and pickled onions. Grill some corn on the cob, make coleslaw and call it good.

One last note: Cook to temperature, not to time. Low and slow gives you time to raise a glass in honor of those who gave their all to our country. Happy Memorial Day.