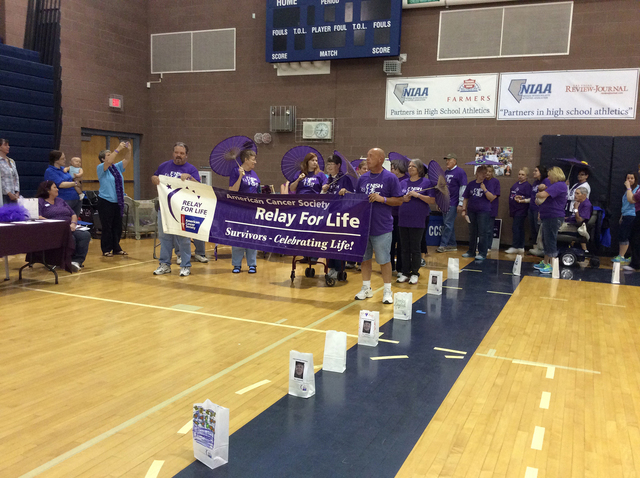 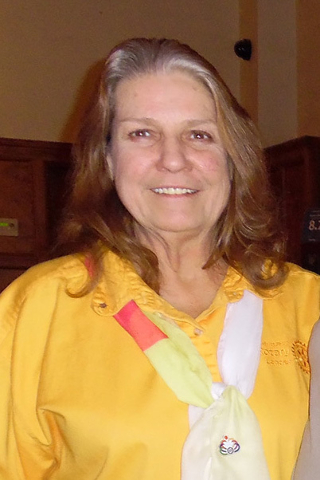 There aren’t many people who can say they are truly happy they got cancer. Christy Springgate-Hill is the rare exception.

She said her diagnosis of liver cancer at the beginning of the year has opened her eyes to the many friends she has and how special a place Boulder City is.

“It sounds funny, but it’s been a good experience,” she said about her illness. “If you have to be sick … it’s totally changed my outlook on life. I compliment people more, look less for the negative and see the positive. It’s renewed my faith and brought me closer to friends and family,” especially her husband, Rick, who has barely left her side, and her son, Taylor, and his fiancee Alyssa.

“I did not know how many friends I had,” she said. “Anything I have needed people have done. It’s amazing. There is no way I can repay them.”

For years, she has devoted most of her time to helping the community she calls home. She has dedicated countless hours to help coordinate events such as the Spring Jamboree, Fourth of July Damboree, Rotary Club of Boulder City’s Best Dam Barbecue Challenge, Friends of the Arts shows and Every 15 Minutes.

But she never imagined that her work with one of those events, Relay For Life of Boulder City, would change her life completely.

“It turned out to be a blessing in a way. I’ve always supported relay and I have learned so much about cancer,” she said.

This year’s relay is being dedicated to her as she faces her own fight.

“Cancer and her other health complications almost killed her so many times, she just keeps on fighting! How could we not celebrate her?” said Myra Davis, co-chairman of this year’s event. “Relay For Life is all about fighting: to beat cancer; to keep people alive; to keep people ‘comfortable;’ to educate people about cancer; and to celebrate those who have fought the good fight and lost (my dad and thousands more); those who have fought the good fight and won (Amy Denney-McGee and thousands more); but most of all to celebrate those thousands that are fighting now — Christy Springgate-Hill.”

Springgate-Hill was already serving as co-chairman in charge of sponsors for the April 29-30 event when she received her diagnosis.

“It’s funny — when I was first asked to be on the committee and help, I thought I already had so many events in April and May and wondered where I would find the time,” she said.

But it was a cause she truly believed in and felt important to devote whatever time she could.

Springgate-Hill has no doubts she will survive this latest health struggle.

“I’m not ready to give up,” she said, adding that she has a life plan for another 30 years and has no intention of making any changes.

“It may be a battle and it may take a little time,” Springgate-Hill said. “I have the good cancer. Liver cancer is one of the most curable cancers and the liver is the only organ that can regenerate itself.

“If you catch it quick enough, you can fix it, and mine was,” she said.

Friends are calling her the rebound queen, she said.

“Christy has been fighting health issues since I’ve known her — for the last 17 years,” Davis said. “But she never lessened her commitment to this community. … In her heart she knew she had cancer before she was diagnosed, but continued with all her activities — at times when she shouldn’t have. It was her way of fighting. We, her friends and colleagues, tried to get her to slow down but she kept working for the good of Boulder City.”

A diabetic, she was in the hospital getting a variety of tests to determine why her sugar level was so high. She also was battling congestive heart failure, had several heart attacks she didn’t know about, and was dealing with a bad gallbladder. One of the tests revealed that she might have some liver issues.

After a biopsy confirmed the cancer diagnosis, she began working with a radiologist to determine a course of treatment and was getting everything set up to begin fighting the cancer when she started bleeding internally.

Springgate-Hill ended up spending 25 days in the hospital, including stays in intensive care and a helicopter flight to the Mayo Clinic in Phoenix for extensive treatment.

Springgate-Hill stressed the importance of supporting the relay because of the number of people who are affected by the disease. In this town, among every group of five people, there is at least one person who has fought or is fighting cancer, she said.

Recently, she spoke with a friend about her battle, only to learn he had cancer that had been in remission for 16 years.

“In 50 years this will be obsolete because of the research,” she said, adding that doctors will laugh about the treatment she will receive later this year, which at this point in time is considered an alternative to traditional methods of fighting cancer. “That is what the relay does — provide money for research. There will be a lot more survivors than there used to be and that’s a cool thing.”

Scheduled from 6 p.m. to 6 a.m. April 29-30, Relay For Life of Boulder City will be held on the track at Boulder City High School.

The focus of the relay is to raise funds for the American Cancer Society, which uses the money to provide support services for those fighting cancer, survivors and caregivers, as well as educational efforts, Davis said.

Earlier this week, nine teams and more than 50 participants had already registered to participate in the relay and have raised nearly $15,000, about halfway to their goal of $30,000.

Davis said they have gotten close before but never met their goal. This year, she and many others are hoping that changes.

In addition to serving as a fundraiser, the relay is a celebration of those battling cancer, those who have battled the disease as well as those who have lost their fight and the mood at the event is usually anything but somber. Throughout the night there is entertainment, games, activities and special laps, including one dedicated to survivors.

Davis said one of the most anticipated lap is the one at 4 a.m., the World Famous Coffee Cup lap, where coffee and cinnamon rolls from the downtown restaurant are served.

Mike Pacini is serving as emcee for the 12-hour-long event and Michael Haney will provide music.

Additional information about Relay For Life of Boulder City can be found at http://bit.ly/1VeMs21.