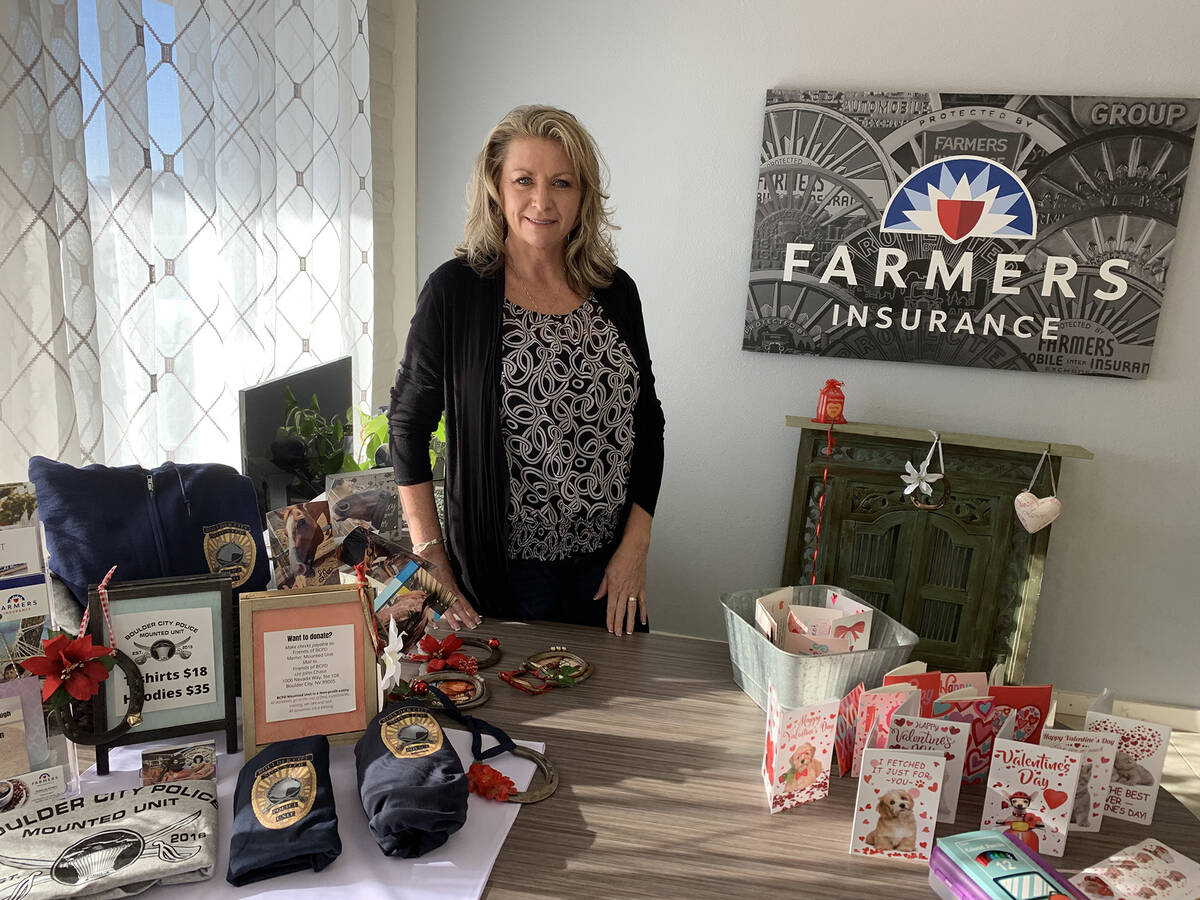 (Hali Bernstein Saylor/Boulder City Review) Since opening her Farmers Insurance office in Boulder City two years ago, Dawn Lee has become an ardent supporter of the community. Among her efforts are coordinating fundraising activities through the Friends of the Boulder City Mounted Police Unit and Operation Secret Valentine, which provides Valentine’s Day cards to veterans at the Southern Nevada State Veterans Home.

In fact, Dawn Lee has become the primary fundraiser and social media coordinator for the Friends of the Boulder City Police Mounted Unit. The mounted police unit’s headquarters are now in their office, she said.

“That’s my drive and my passion,” she said.

A horse lover her entire life, Lee said she knew she had to do something after learning that the city does not financially support the mounted unit and that all the expenses associated with its operation are provided by the officers themselves or through fundraising activities.

Lee, who showed horses when she was young, said she knows how quickly costs for their food, veterinary care and equipment can add up.

She said will do anything she can to help generate funds and, so far, everything she has done to help the unit has been embraced and supported by the community.

For the holidays, she transformed old horseshoes into Christmas ornaments, which she sold. Once members of the horse community heard about the project, they rounded up all the horseshoes they could and donated them to her. Now, she is making them as any-day decorative pieces.

“It all goes back to the herd,” she said, adding she loves the horses as if they were hers.

She keeps pictures of the unit’s horses in her office, which she gives away to children who come by.

In return, she had a table at Art in the Park in October and asked children to color pictures, which she put into a book and gave to the police officers.

When the Lees first opened their office in town, Dawn Lee said she jumped into a variety of community events, serving as a sponsor.

She said their first event was a coat drive to assist Pride &Purity.

Now, they have narrowed their support to a contest for children of Boulder City, Operation Secret Valentine and mounted police unit activities.

Operation Secret Valentine is happening now through Feb. 4. Lee is inviting anyone to come by the office at 1402 Boulder City Parkway to make a valentine for residents of the Southern Nevada State Veterans Home. She has an assortment of blank Valentine cards, pens, markers and stickers, and people are welcome to come by, sign the cards and write messages to the veterans.

She said she also has members of a Girl Scout troop come by and sign cards.

Last year, she delivered more than 250 Valentine’s Day cards and said she hopes to surpass that this year.

For her art contest, she selects three topics and children are encouraged to choose from these for their entries. The contest is divided into three age divisions and the community votes for the winners, who are given gift cards to local restaurants.

Additionally, A&W has provided coupons for a free ice cream cone for all entrants.

“I’ve always been a small-town person,” she said, adding she appreciates all the relationships she has made since opening her office. “I’ve met some amazing people.”

They are in their ninth year with Farmers Insurance Group.