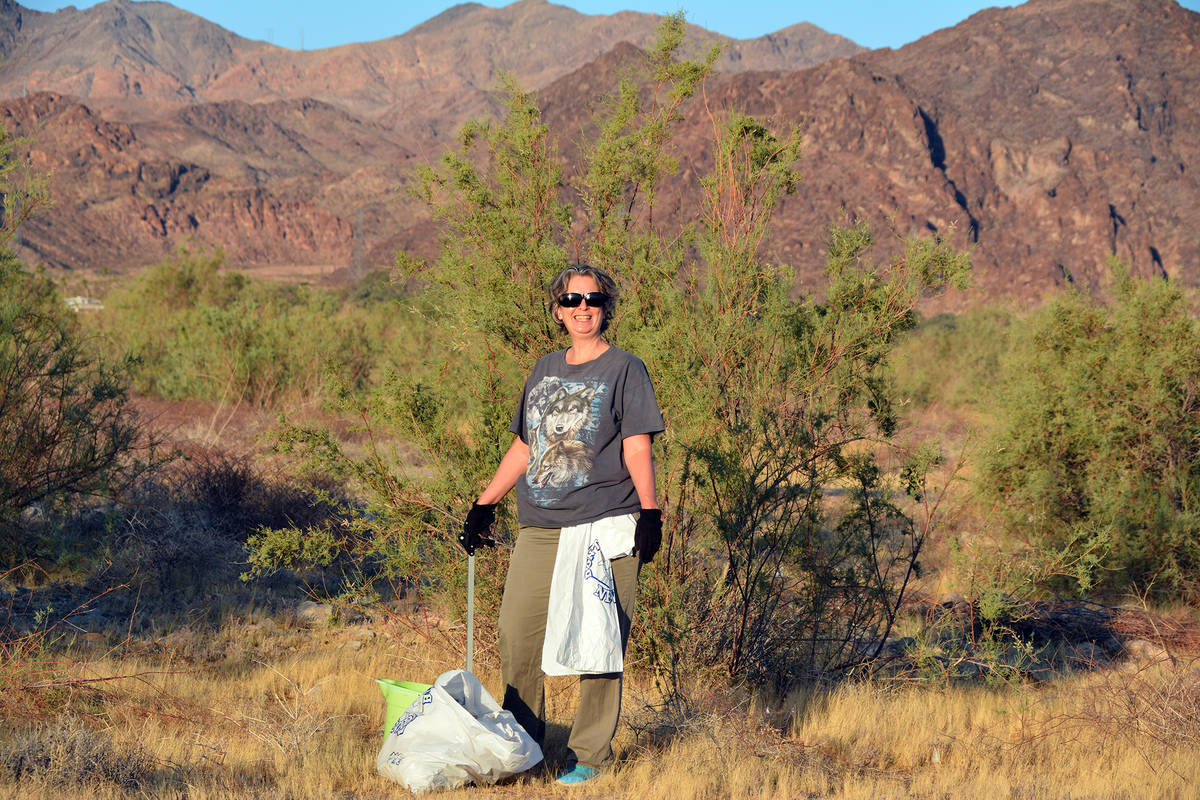 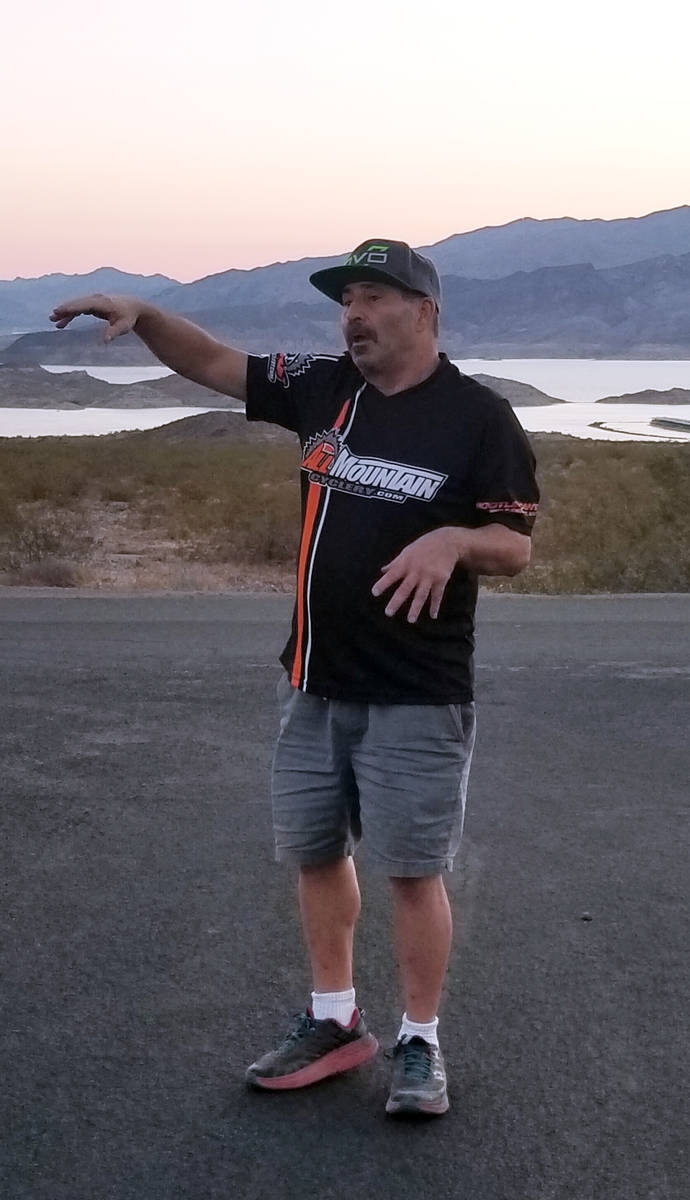 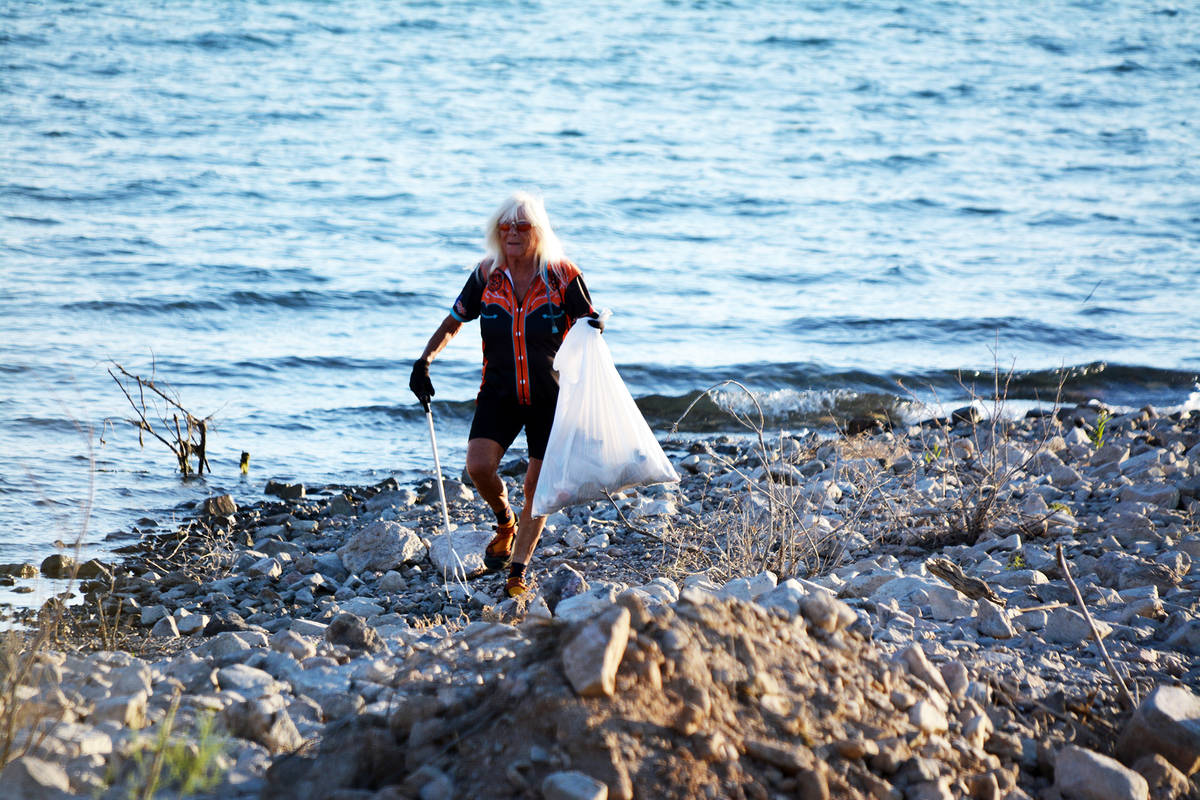 When many people are waking up and starting their morning routine, a group of Boulder City residents are hard at work cleaning up the beaches at Lake Mead.

Recently, Mike “Downhill Mike” Scheur went to Lake Mead National Recreation Area with his family and they were appalled by the amount of trash on the beaches.

“I took my daughters to the beach because it was so hot,” he said. “They were disgusted by it.”

Scheur said he decided to do something about it.

“There are some things you can’t fix,” he said. “This seemed fixable.”

A little more than a month ago, he organized a group of volunteers to meet on Thursday mornings and clean up different beaches at the park.

“We just go where it looks the worst,” he said.

Dominique Spitzers said she’s been part of the group since it started and it helps keep her busy since she is unemployed due to the pandemic.

“I think it’s disgusting that people leave trash like this. … The worst thing I find is fishing lines,” she said. “They’re bad for all the animals and for us. A lot of them still have hooks in them.”

“We come down here quite often, me and the family,” said Jose Torres. “We see a lot of the trash.”

Torres said Thursday was his third time participating with the group.

“Something like this can be hard to do by yourself,” he said. “We can make more of a dent in a group.”

Scheur said in its first five weeks the group has collected 88 bags of trash and 12 buckets of glass and metal items. It has also provided at least 50 hours of manpower cleaning the beach.

“My estimate, based on 20 pounds in each bag, is one ton of trash has been removed so far,” he said.

Lake Mead National Recreation Area Public Affairs Officer Christie Vanover said help from these volunteers and others is an asset.

“Having support from community volunteers is a huge benefit to the park,” she said. “This summer, nine different community groups and organizations donated their time to help remove nearly 7,000 pounds of litter left behind on beaches, overlooks and coves. The total amount of time donated is equivalent to more than seven weeks of an employee working full time. The independent sector values this volunteer time at around $8,500.”

Scheur said one of his goals for his group is to make the beach look like it’s “not disgusting” when people go there.

“More people are apt to litter if they see trash on it,” he said.

Approximately a dozen people help out each week and new people frequently join.

“I live here,” said Joan Sibava, who participated for the first time Sept. 10. “I retired here. I love Lake Mead and I think it’s disgusting that people leave trash here.”

Resident Valerie McNay said she thinks it’s a “great idea” to do the beach cleanup and has worked with the group three times so far.

“This is just such a difficult time,” she said.

McNay also said the beach has been used by a lot of people recently who may not know about the dumpsters there.

“Watching these groups rally to make Lake Mead trash-free has been truly uplifting,” Vanover said. “We are proud to work with them.”

The groups meets from approximately 6-8 a.m. every Thursday. To find out how to participate, contact Scheur at info@downhillmike.com and put Beach Cleanup in the subject line.