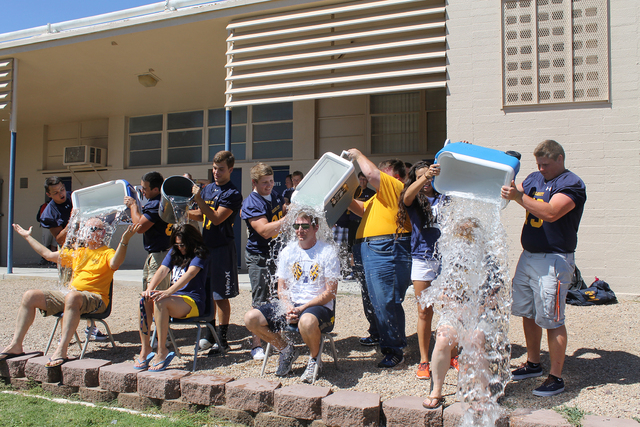 The nomination started after band director James Gillette challenged teachers Canaan Petersen and Cheryl Herr, Dean James Campbell and Vice Principal Amy Wagner to the ice bucket challenge in the quad during a pep rally Friday. Each staff member had a bucket of ice water dumped on his or her head.

Raffle tickets will be sold for $1 at the school, and can be purchased until the end of the first quarter of the game. Then, tickets will be drawn and the winners will pour the ice water over the participants’ heads.

All money collected will be donated to the ALS Association in memory of Wendy Rockenfeller, who died from amyotrophic lateral sclerosis, also known as Lou Gehrig’s disease, in 2012. Rockenfeller’s son, Justin, is a senior on Boulder City’s varsity football team.

Petersen is completing the challenge for the second time because his aunt has ALS, Herr said.

The ice bucket challenge, a cause that went viral through social media last month, has raised more than $100 million for ALS research, according to the New York Daily News.