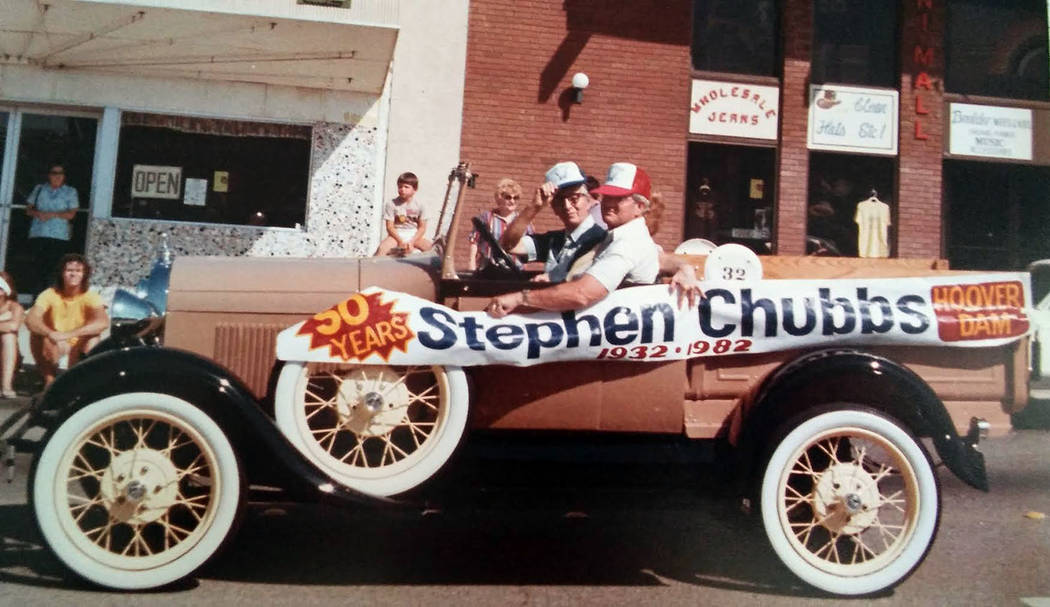 Wendy Perkins Stephen Chubbs, seen tipping his hat, was the grand marshal of the Damboree parade in 1982, marking 50 years of employment at Hoover Dam.

A parade, a barbecue and a fireworks show. That’s how it’s done in Boulder City, when people want to celebrate the Fourth of July.

“It’s all so planned these days,” said Wendy Perkins.

She was born in Boulder City and remembers the simplicity of spreading an Army blanket on the grass of the baseball field before the fireworks while someone else handled all the planning. As a little girl in the 1950s, she could just enjoy how amazing the sky looked. Little did she know it, but soon enough Perkins, herself, would be one of the people in town to make things happen on Independence Day.

In the 1970s, Perkins was raising kids in Boulder City, as her father, Stephen Chubbs, continued his lifelong career at Hoover Dam. Her kids needed lunch and, at the same time, her dad needed a decent lunch that wouldn’t get mixed up with all the other workers’ lunch boxes. Perkins covered the outside of his plain silver lunch box with flowered contact paper to make it obvious who it belonged to. As an answer to her joke, he purchased a goofy floral hat that matched the contact paper and wore it every day.

When the Fourth of July came around each year, it was Perkins who planned the barbecue and remembered to pack blankets to sit on for the fireworks. As her father finished his 50th year working at Hoover Dam, he was honored as grand marshal in the 1982 Fourth of July parade.

“They even named a boat after him. When he visited, he told the dock workers he was just coming to pick up his new boat,” she recalls.

Perkins collected up all the news articles, photos and even a full Arizona Highways article on her dad. She relates that he began work at the dam in 1931 and one of his first jobs was, “a grunt. Well, he called himself a grunt. He had to dive out of the way not to get blown up when they were blasting.”

She said he enjoyed the variety of jobs he did over more than five decades, and retired as a hydrological technician in 1986. He was always known for his consistency and good attitude. In fact, he took so little sick time or vacation days that he was featured in the Las Vegas Sun Magazine saying, “I’ve accumulated 2,477 hours of sick leave since 1938. I also still have 68 days of annual leave left over from World War II.”

Like father like daughter, as the saying goes. Perkins kept the lunches going for her dad and her children, kept hosting the Fourth of July barbecues, and also organized class reunions where her classmates would join her in chairs on a flatbed.

“Sometimes, we’d sing,” she said, “although I remember one year they picked a song from the Beatles that I didn’t like.”

These days, Perkins plans five hours in advance to stake out a spot in the shade to watch the parade.

“We used to talk to each other. Now, everybody there is looking at their iPhones.”

She’ll still host a barbecue on the Fourth, “with extra food because you never know who’s going to show up,” and she’ll still watch the fireworks. This year, though, the grandkids can bring their own blankets.

Paige Ladd returned to Boulder City after 35 years away. If you have a long family history in Boulder City and would like to be featured, contact the author at Ladd.Paige@gmail.com.