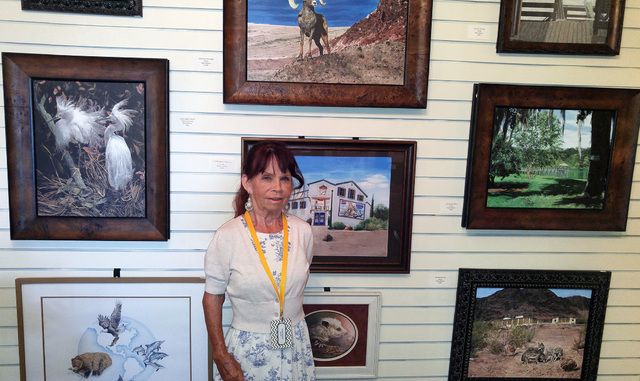 The Boulder City Art Guild held a reception Sunday at its gallery inside the Boulder Dam Hotel for Debra Wilson, Julys featured artist, highlighting her collection of vivid wildlife and landscape paintings.

Wilson moved to Boulder City two years ago, and she has already found her work in high demand, having been commissioned to make paintings for local businesses such as GoatFeathers and Hoover Dam Lodge.

Following in her fathers footsteps  a commercial artist who created logos and design work for the U.S. government and military  Wilson said she fell in love with creating art when she was just a child.

Ive been painting longer than I can even remember, since I was 5 or so. Ive just always felt an innate need to create, Wilson said. In college I started out doing commercial art, as my dad had, but I realized it just wasnt for me. I love wildlife and nature and so that has been what Ive stuck with.

The art world may not always be the easiest place to make a living, but Wilson said she has found a way to make it her career by following her heart.

Im kind of what you might call a full-time starving artist, Wilson said. But I do what I love. I really love to capture animals in their natural environments, and the animals vary from state to state, so it never gets old.

Each work begins with a photo Wilson takes herself, followed by as much as three months of painstaking work, she said, using various brushes and a fine eye to catch every minute detail.

The guild, which is made up of 105 artists from around Southern Nevada, was formed in 1976. Among the attendees Sunday was Cindy Bandy, the sole living founding member.

I first moved to Boulder City in 1973 and in that first year some of the other ladies and I began getting together and painting, Bandy said. Within a few years we formed the guild because we enjoyed being together and really we wanted some real estate of our own. So we opened our first gallery on Nevada Highway.